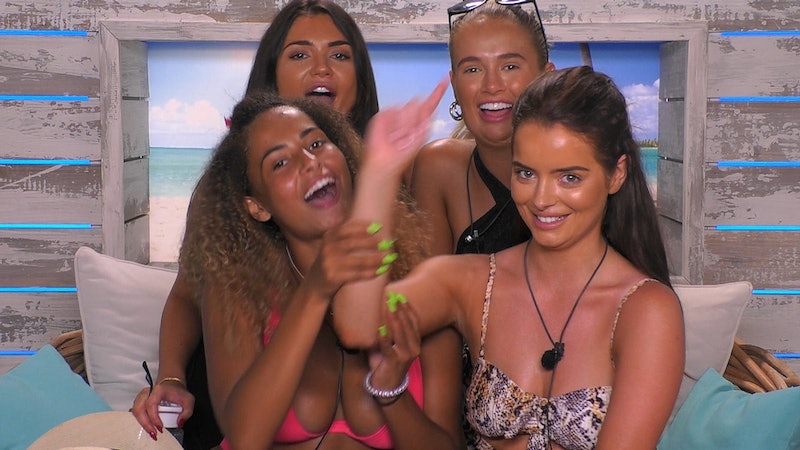 Tonight's going to be an emotional one, Love Island fans: when the big reunion show comes to an end, the show will officially conclude for another year — and unless you happen to stumble across their brand deals, TV gigs, guest appearances, or extremely lucrative Instagram posts, this could be your final farewell to the 2019 islanders (just to clarify: it definitely won't be). But where is the Love Island reunion actually filmed?

The villa's been emptied out, and Casa Amor is practically sprouting cobwebs, this year's drama a mere memory receding ever further into the past. The contestants have all flown back from Majorca, too, with many making their post Love Island public debuts: reigning victors Amber and Greg celebrated with Yewande for Amber's birthday in London, while Danny, Joe, Anton, and Michael were also spotted in the city.

Which means they won't have far to travel for Love Island: The Reunion — a bit of Googling reveals the show will be filmed in front of a live audience at Elstree Studios in Borehamwood, to the north of London. Caroline Flack has hosted Love Island: Aftersun from the same studios all season (and yes, she'll be back tonight, the Radio Times reports, as will Iain Stirling for the voiceover).

The show will focus on the final four couples — Amber and Greg, Ovie and India, Maura and Curtis, and Tommy and Molly-Mae — and their lives together outside the villa. According to the Radio Times and Huff Post, we'll see Amber and Greg visit Newcastle, where they'll hang out with Amber's family (and later, she'll meet up with Michael.)

Ovie and India make pancakes together, while Tommy and Molly-Mae try out a spot of couple's boxing. Maura and Curtis will take a trip to Ballymahon — but Curtis will also be confronted by ex Amy. And Danny will be reunited with exes Yewande and Arabella at the same time, with his present girlfriend Jourdan.

One islander who won't be there tonight is Sherif, who told the Sun he wanted to attend the reunion but was blocked by Love Island producers. He called their decision "upsetting," adding, "I can’t rule out that racism was a factor here. I think there may have been some unconscious racism."

"They are saying that because my contract has ended I am not required to go. But I want to go so I don't see how 'not required' means that I am banned," he told the Sun, adding, "I didn't get a chance to say goodbye when I had to leave and I was looking forward to seeing the friends I made in the villa."

Sherif also said Love Island bosses attempted to block him signing a deal with Boohoo. "I think this vendetta against me is coming from people higher up in the company rather than by the producers who know me," he said. "It feels like they're still punishing me for my initial mistake again or maybe they are punishing me for telling the truth about the incident." Bustle has contacted ITV for comment.

Love Island: The Reunion will air tonight, Sunday August 4, on ITV Two — and if previous reunions are anything to go by, it's guaranteed to be dramatic. Just do your best not to cry a tiny tear when you hear that theme tune for the last time.