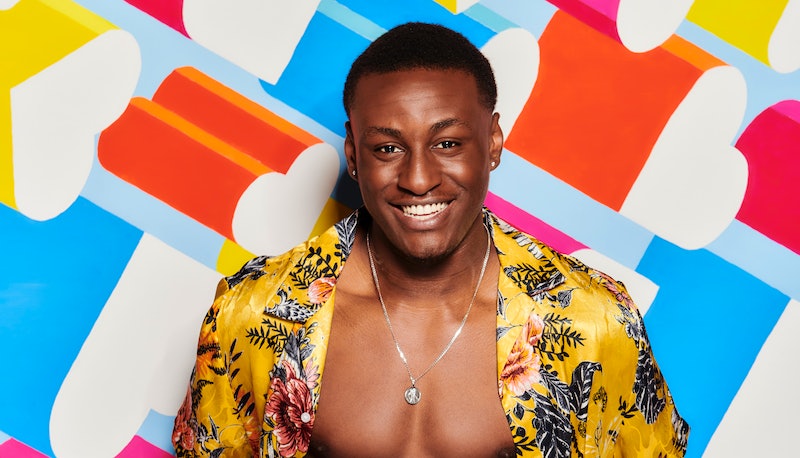 When this year's islanders reunite tonight, one person won't be present: Sherif Lanre won't appear on Love Island: The Reunion, after he was removed from the villa near the start of the series. After his exit, Sherif criticised Love Island producers, saying "unconscious racism" was at play and further said he felt he was "treated like a criminal" when he left. After news broke that he'd been barred from the reunion show, Sherif told The Sun that the decision was "upsetting," saying, "I can’t rule out that racism was a factor here. I think there may have been some unconscious racism."

"By that I mean, the producers might not have been aware of what they were doing, but they may have had an inherent bias in their minds that caused them to act against me," he said.

Bustle has contacted ITV for comment, but hasn't yet received a response. A spokesperson told the Sun, "Sherif left this series of Love Island by mutual agreement after breaking the rules and there are no plans for him to appear at this weekend’s Aftersun Reunion," later adding, "All of the Islanders are treated fairly and in accordance with our duty of care."

Sherif was told to leave the Love Island villa in June after accidentally kicking Molly-Mae Hague in the groin, and subsequently telling Tommy Fury, "That was a c**t punt." He told the Sun, "I did kick Molly-Mae in the groin area but it was an accident and she 100 per cent was not injured afterwards," adding, "I know I have been stupid and let myself down but I was not being malicious. This has been blown out of all proportion and I have been made to look like a terrible person when I am not."

Sherif said Love Island producers woke him the next day earlier than the other contestants, telling The Sun they asked him to "explain" himself. "I told them we were just messing around but they said I had broken the code of conduct and it had been decided by someone high up that I had to leave. I was shown a straight red card," he said. "I was sent home without the chance to pack my bags or say goodbye to the other contestants. I was treated like a criminal over a simple mistake."

"I was the only black man in the villa and I was kicked out after ten days. In my opinion, what happened was unconscious racism," Sherif said, adding: "There was, I felt, sexism. I feel I wouldn’t have been given that red card if I was a white woman."

After leaving the villa, he was interviewed by the BBC's Victoria Derbyshire, who pointed out that in 2018, Ellie Brown called Georgia Steel a "c**t" but was not removed from the show. "I feel that the people who are in charge of the show maybe have an unconscious bias around the rules and regulations for boys and girls and maybe different races and stuff like that," Sherif responded.

Asked further about racial bias in Love Island, he said, "I feel like the airtime which contestants of my race and races similar to mine [get] was very disproportionate to our value in the villa. I feel like we did a lot more to keep the villa together."

What's more, Sherif also told the Sun, "one guy, who I will not name, repeatedly used the N-word as he rapped in front of me. He said it two or three times and he was not pulled aside even though the code forbids racist language." An ITV spokesperson denied Sherif’s allegations and said in a statement, "we have no recording of the use of this offensive language."

Speaking about tonight's reunion show, Sherif told the Sun, "They are saying that because my contract has ended I am not required to go. But I want to go so I don't see how 'not required' means that I am banned." He continued, "I didn't get a chance to say goodbye when I had to leave and I was looking forward to seeing the friends I made in the villa."

"The reunion would have been my one chance to see some of them this summer. Several of them have said they would see me there. The situation is upsetting," he said.

What's more, Sherif says Love Island bosses attempted to stop him signing a deal with Boohoo, as contestants reportedly sign a contract stating they won't work for brands rivalling the show's partner clothing brand I Saw It First. Sherif says he was released from his contract when he was told to leave the villa, however. "I feel like they are trying to make my life as difficult as possible," he told The Sun.

"I think this vendetta against me is coming from people higher up in the company rather than by the producers who know me," he said. "It feels like they're still punishing me for my initial mistake again or maybe they are punishing me for telling the truth about the incident."

More like this
This Pre-'Love Island' Video Of Olivia & Zara Together Changes Everything
By Bustle UK
'Love Island’s Kai Fagan Is Very Clear About What He Doesn’t Like
By Sam Ramsden and Darshita Goyal
Twitter Is Saying The Same Thing About 'Love Island'
By Sophie McEvoy
Laura Anderson Pulled The Ultimate Girl Power After Her Break-Up
By El Hunt and Megan C. Hills
Get The Very Best Of Bustle/UK
Sign up for Bustle UK's twice-weekly newsletter, featuring the latest must-watch TV, moving personal stories, and expert advice on the hottest viral buys.