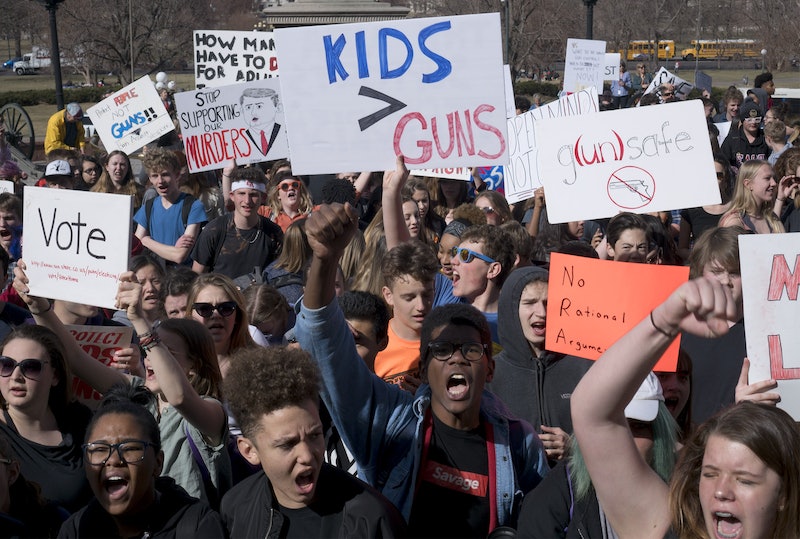 Activists around the world are gearing up for the March For Our Lives, an international protest against gun violence planned for Saturday. The demonstrations were organized in part by survivors of the Parkland shooting in Florida in February, in which a gunman killed 17 students at Marjory Stoneman Douglas High School. If you're wondering where the March For Our Lives is taking place, the answer is: Everywhere.

Well, not literally everywhere. However, every state in the U.S. is hosting at least one March For Our Lives event, and according to co-organizer Sarah Chadwick, every continent is holding at least one march as well. There are a total of 842 events worldwide planned for Saturday, and if you'd like to find the closest one to you, simply go to this page on the March For Our Lives website and punch in your city or zip code.

Of course, some states are hosting more marches than others, and the breakdown isn't terribly surprising. There are dozens of marches in California, the most populous and one of the most progressive states in the country, compared with just three in smaller, more conservative North Dakota. Likewise, there are loads of protests in some parts of the world — namely north America and western Europe — but relatively few in others. There are only two Marches For Our Lives planned for the entire African continent, for instance — one in Ghana and one in Mozambique.

The March For Our Lives organizers have three explicit policy goals: Banning the sale of assault rifles, banning the sale of high-capacity magazines, and closing loopholes in the FBI's background check system. But the marches are also just a general protest against gun violence in America in general, and are open to anyone who supports stronger gun regulations and wants their voices to be heard.

There were 345 mass shootings in the U.S. in 2017, according to the Gun Violence Archive, which averages out to almost one per day. It's common for those shootings to reignite the national debate over gun violence, so in a sense, it's no surprise that this happened again after the shooting at Stoneman Douglas. And yet the reaction to the Parkland shooting has been different, and this is in large part thanks to subsequent activism on the part of the survivors.

After the shooting, a handful of students at Stoneman Douglas plunged headfirst into gun control activism in a very public way, and have since become nationally-known — and Twitter-verified — celebrities. They've given eloquent and powerful speeches in favor of stronger gun laws, interrogated pro-gun lawmakers at town halls, compelled at least one congressional candidate to drop out of their race, been featured on the cover of TIME and now, organized an international protest in demand of stronger gun laws. They've done all of this in the face of death threats and right-wing conspiracy theories and smear campaigns from those who oppose stricter firearm regulations.

The political response to the Parkland shooting is also different in that, while there have been many public debates over America's gun laws, this most recent round has been especially focused on child gun deaths. Most victims of the Parkland shooting were kids, and several recent studies have shed light on the alarming extent to which gun violence affects American children. To take just one example, a study published in the journal Pediatrics in march found that guns have become the third-leading cause of death for American kids.

"We’re the mass shooting generation," Parkland survivor Cameron Kasky said in an interview with 60 Minutes. "I was born months after Columbine. I’m 17 years old and we’ve had 17 years of mass shootings."