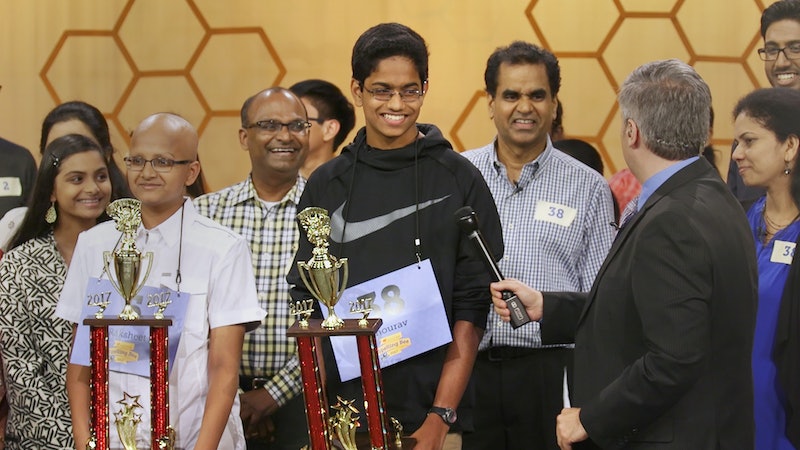 Warning, spoilers for Spelling the Dream ahead. Netflix's new documentary Spelling the Dream (out now) is a fantastic look into not just the intense, competitive culture around the Scripps Spelling Bee itself, but the seeming dominance of South Asian or Indian students in the competition. The documentary follows four young spelling bee hopefuls, each vying to become the 2019 champion: Tejas Muthusamy, Akash Vukoti, Ashrita Gandhari, and, finally, Shourav Dasari. But where is the Spelling the Dream cast in 2020?

As Spelling the Dream highlights, Dasari garnered a reputation for himself across his years of competition as "the Michael Jordan of spelling" from his peers and friends. 2019 was actually the last year Dasari would be allowed to compete, as competitors age out once they reach 14-years-old (or progress past the eighth grade, by American school grades). Of course, with a legacy riding on his final performance, the pressure was mounting. As his father said in the documentary, "We expect him to win." (Spoiler: the championship resulted in an unprecedented eight co-champions, all of whom shared in the victory after exhausting the bee's list of approved words.)

Now, in 2020, Dasari is 17 and has focused his attention on helping others achieve the "Michael Jordan" status he's earned. Alongside his sister, 19-year-old Stanford freshman Shobha Dasari (also a spelling bee contender, as a four-time semifinalist), he opened Spelling Pundit, a service aimed at helping spelling bee contenders prepare for competition. But that's not all: together, the Dasari siblings (with Shourav now in high school) organized their own spelling competition that was hosted online in the last week of May after Scripps suspended their annual spelling bee due to the COVID-19 pandemic, according to The New York Times. Getting around to hosting their own competition was only a matter of time for Shourav and Shobha, as Shourav told Good Morning America. He said, "We've entertained hosting an online spelling bee for a year now," and the pandemic "accelerated the process."

Meanwhile, another competitor highlighted in Spelling the Dream, the "fresh newcomer" Ashrita Gandhari, now 13, continues to pursue competition where she can. Most recently, she appeared on a special online broadcast of Good Morning America to compete in a small spelling competition alongside fellow Spelling the Dream star Akash and the documentary's director Sam Rega. She also spoke with host Sara Haines about her love for the competition, saying, "I fell in love with this competition. I love every single aspect: competition, the friends you make along the journey, even the studying." She continued, "And I realized this is something I want to do. This is something I want to make a career out of."

And as for Vukoti and Muthusamy, they're both as committed to spelling as ever. Vukoti is now 11 and was honored with the 2020 Global Child Prodigy Award. Whereas Muthusamy, 17, coaches students in spelling nationwide.