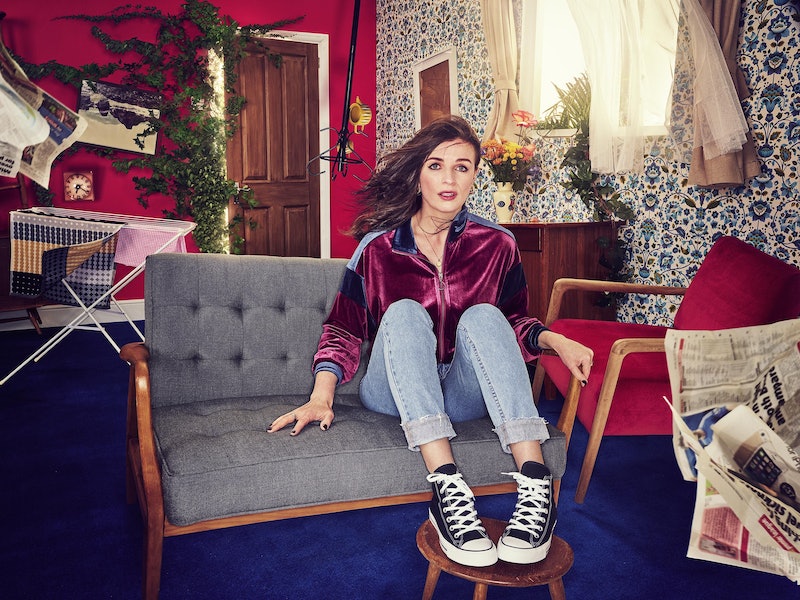 Aisling Bea's new comedy This Way Up is an ode to laughing during the harder parts of life. It tells the story of a woman getting back to her usual self after the trauma of a nervous breakdown. Tackling the topic of a familiar part of life for many — mental health issues — Bea's character Aine could be anyone. But what about the world she lives in? Does anybody else feel like some of the locations the show was filmed in look a little familiar? Where is This Way Up filmed?

The show is set in London, so I think it's pretty safe to assume it was filmed there too. Bea has spoken about how London life was one of an her inspirations for the show. In an interview with Digital Spy, she revealed that she really wanted the series to showcase how tough living in London can be. She told the publication "I wanted to show the rough messiness of life in London." It's something that she is all too familiar with having lived in the capital herself for several years. In fact she told Fabric magazine her favourite thing about London is the pubs. And funnily enough she posted a picture of herself and co-star Sharon Horgan filming the show in a pub back in January.

The show tells the story of Aine, an English language teacher who is getting back on her feet after a nervous breakdown. With the help of her sister Shona, played by Horgan.

The English language school where Aine works is filled with all sorts of people who are struggling in their own way. Including a French boy who's reconnecting with his English father after the death of his mother.

In an interview with Channel 4 about the show, Bea explained that the core theme is loneliness. She said: "The show is technically a comedy about loneliness, but that’s kind of a hard-sell. The romance at the core of the show is the relationship between two sisters. What I wanted to do was make a show not about someone breaking down, but starting broken and going 'this way up' on the way to recovery."

I mean, loneliness doesn't sound like the funniest topic to me either, yet Bea seems to make it work. The show is produced by Horgan's production company Merman. Horgan, who you probably recognise from hit show Catastrophe, and Bea have worked together on TV projects before, and they've even written a film together. The pair get on like a house on fire and have a great working relationship. Bea shared with Channel 4 that sisterly love isn't just fictional for the pair as they have become so close over the years. She goes so far as to say Horgan is almost like an older sister.

"I look up to her in a big sisterly way. I'm a massive fan of her. I do have an absolute want to make her laugh. It’s so rewarding, she’s got this dirty, fry-up laugh. And she laughs very freely, she loves funny people, so she really lets out her big old laugh," she explained.

The six part series is being compared by some as in the vain of one of the best comedies in years, Fleabag. A fact which is super flattering to Bea as she revealed to the Radio Times, especially as she's pals with Fleabag creator Phoebe Waller Bridge. I know, right? Talk about dreamy girl gang.

"To be put in the same pile… Phoebe's a friend of mine, but I'm also in awe of her talent. If anyone wants to draw comparisons, let them," she told the publication.

I guess the only way to find out if you think the two shows are on a par is to tune in. I'm sure you won't be disappointed.