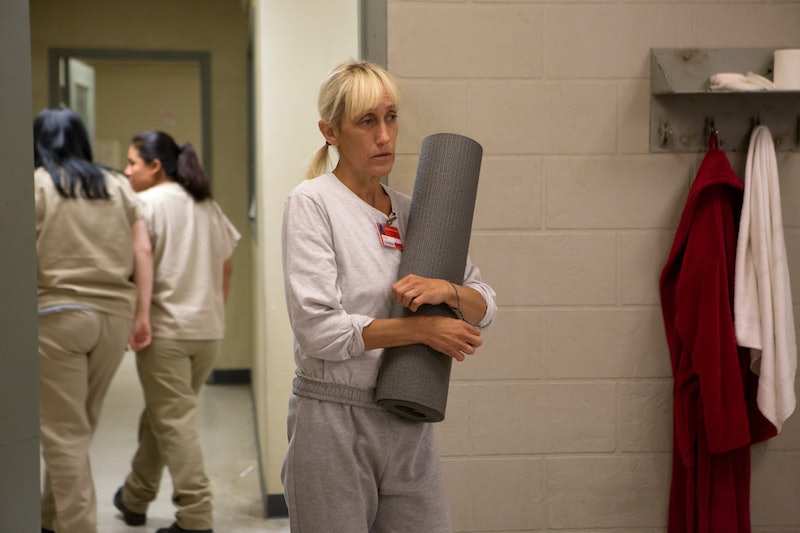 Spoilers ahead for Orange Is The New Black Season 7. Kindness is hard to come by in Litchfield, but for the first few seasons of Orange Is The New Black, there was one character who other inmates could regularly count on for considerate conversation and a helpful yoga lesson. While Yoga Jones was never as prominent as, say, Piper, Taystee, or Suzanne, she's nonetheless a crucial part of the dysfunctional Litchfield family who has been missing since she surrendered herself during the Season 5 riot. Unfortunately, we don't get to see where Yoga Jones is in OITNB Season 7 until the final moments, but the show does manage to catch up with her briefly to give her a proper goodbye.

In Orange Is The New Black's first season, Yoga Jones is one of the first people to extend kindness to the newly incarcerated Piper Chapman, welcoming her to a seat at Jones' table. Years later, in an entirely new facility in an entirely different state, Yoga Jones is still inviting lost souls to her table and ushering them into the next chapter of their lives as gently as possible.

Columbus, Ohio seems to be a popular spot to send previous Litchfield inmates, as Yoga Jones is seen sitting with Big Boo, Norma, Anita, Gina and a freshly transferred Alex toward the end of the OITNB series finale. With the exception of Alex and a brief cameo in Season 6 from Big Boo, most of the characters haven't been seen since Season 5. Yoga Jones, along with several of the other inmates now in Columbus, surrendered themselves to authorities during the riot to try and protect themselves. Many ended up getting sent to Litchfield Maximum, but Yoga Jones and company seemed to luck out and get sent to another minimum-security facility.

Jones' final line, delivered to an unnamed new inmate at her table, mirrors one of the first lines she says to Piper Chapman: "Do you know what a mandala is?" As Jones explains in Season 1, a mandala is an ornate work of art that Buddhist monks construct and then quickly destroy. She urged Piper to look at her time at Litchfield as a mandala, saying "Work hard to make something as meaningful and beautiful as you can, and when you're done — pack it in and know it was all temporary." Just as mandalas, lives, and prison sentences are temporary, so too, sadly, is Orange Is The New Black.