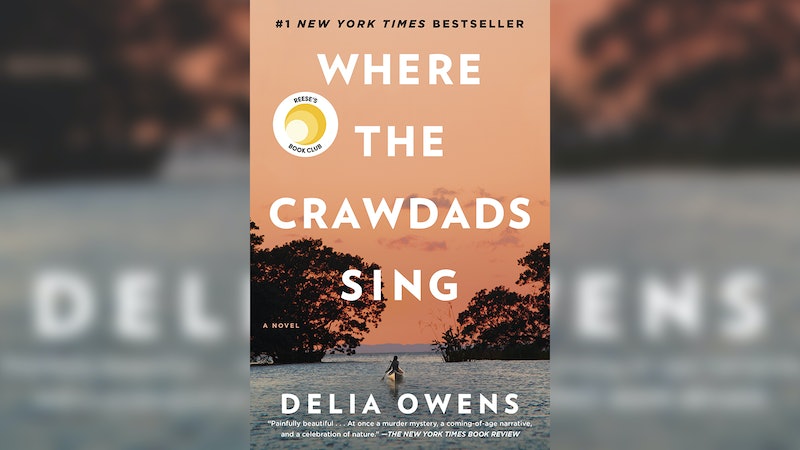 Slate's Laura Miller has revived an uncomfortable story about Delia Owens, whose debut novel has captivated book clubs and critics for the past year. The author of Where The Crawdads Sing is connected to a real-life murder mystery from 1995, when she and her then-husband, Mark Owens, were doing conservation work in Zambia.

Published in August 2018, Where the Crawdads Sing was an overnight success after it became the September selection for Reese Witherspoon's Book Club with Hello Sunshine. The novel, which boasts a rating above 4.5 stars on Goodreads, has sold more than 1 million copies to date, and was nominated for both Edgar and Goodreads Choice Awards. It is also a #1 New York Times bestseller.

Although Where the Crawdads Sing has been a breakout hit for Delia Owens, it is not her first book. She also co-authored several works of nonfiction with her ex-husband, including The Eye of the Elephant and Cry of the Kalahari. Those memoirs center on the decades the Owenses spent living in Botswana and Zambia, where they worked as conservationists and fought to save elephants and other African fauna.

In 1995, an ABC camera crew came to Zambia to film a segment highlighting the Owenses' conservationist efforts. What they filmed would air as a 1996 Turning Point special, titled "Deadly Game: The Mark and Delia Owens Story." The film documented rising tensions between the Owenses and local poachers, showing Mark Owens order scouts to "shoot at them first... when you see the whites of his eyes." Writing to donors after the episode aired, the Owenses claimed that "The 'shoot to kill policy' is only used by Zambian government Game Scouts in self defense. It is not a policy of our project."

Later, the Turning Point episode showed a grisly scene — the death of an alleged poacher, identified as a "trespasser," who was shot several times, on camera, by an anonymized scout. Meredith Viera, the now-famous journalist who reported on the Owenses' African work, explained in the piece that the ABC crew "were allowed to accompany patrols in Zambia after we agreed not to identify those involved, should a shooting occur." The man killed on camera has never been identified. The Owenses deny all involvement in the incident, but are wanted for questioning in connection by the Zambian government.

After the episode aired, the Zambian government began a homicide investigation. The Owenses left the country to visit the U.S., shortly after their Turning Point documentary aired. They have not returned.

Although the Zambian government was still investigating the case as of 2010, no charges have been filed against the Owenses. That hasn't stopped some witnesses from speaking on the record about the events of that day, however. Chris Everson, the cameraman who filmed the encounter, alleges that it was Christopher Owens — Mark Owens' son and Delia Owens' stepson — who fired the first and final shots on the man. Relating the story to The New Yorker in 2010, Everson said, "I don’t know what was going on in Chris’s mind... He had a rush of blood to the head. I don’t know why he shot him in the first place."

According to The New Yorker, neither Everson nor Deborah Amos, another reporter on location with Turning Point, remembered seeing Christopher Owens in the camp after the incident. Biemba Musole, the detective charged with investigating the death, alleged that Mark Owens disposed of the body using his personal helicopter, which Owens denied. Furthermore, Delia Owens told The New Yorker that her stepson was not in Zambia at the time of the shooting, and suggested that "people say Chris did this because they got confused, because the cameraman was named Chris, too."

There are major spoilers for Delia Owens' Where the Crawdads Sing ahead.

Writing for Slate, Laura Miller draws connections between the alleged homicide and Delia Owens' debut novel. These connections are all mere speculation. Set in mid-century North Carolina, the novel focuses on a homeless abuse victim named Kya, who becomes the prime suspect in the murder of the local high-school quarterback. Kya's plight as the vulnerable target of a police investigation "echoes [the author's] Zambian experience and the subsequent ordeal of becoming the subject of a 18,000-word exposé in a prominent magazine," according to Miller. Perhaps more troubling is the fact that the novel's final pages reveal Kya to be guilty of the murder.

Delia, Mark, and Christopher Owens have neither been charged or exonerated in the Zambian incident. All three are wanted in Zambia for questioning related to the incident.

You can read more about this story in Slate and The New Yorker.