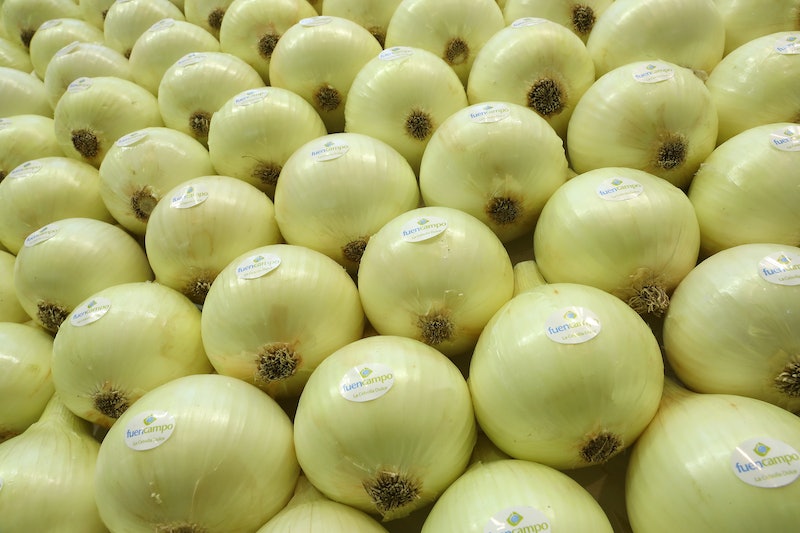 Being the designated onion chopper is a tough job, but someone's got to do it. With the advent of tearless onions, though, the only reason you'll be weeping at the kitchen counter is for joy. With the end of the year rapidly approaching, you'll naturally want to know where to buy a tearless onion before you have to cook up a storm for the holidays. Luckily for you, I have answers — just be sure to hang on to your onion goggles for a little while longer. While these onions exist, "Sunions" are not expected to hit grocery store shelves until next year.

While they are a staple ingredient in pretty much every type of cuisine, raw onions are the bane of many a chef's existence. No matter how strong your constitution may be, slicing into one kicks off a parade of stinging eyes and sniffles. People have come up with plenty of ways to avoid crying when chopping onions, some of which seem to work better than others, and in the meantime, farmers and researchers at Bayer Crop Science have been busily at work creating an onion that won't require special anti-weeping measures in the first place. Finally, after decades of careful farming, they have a result: the Sunion, which promises to leave you dry-eyed no matter how much onion is required by your recipe.

According to the Los Angeles Times, these onions are not the result of genetic modification. Instead, they were created using old school cross-breeding techniques. "This onion is the product of more than 30 years of research and development to grow an onion that actually decreased in pungency during storage," explained Sunions breeder Rick Watson in a press release.

Unlike regular varieties of onion, Sunions don't get stronger over time — instead, they become sweeter. According to their website, they are crunchy, mild, and sweet, and they serve as a perfectly adequate replacement for traditional onions in any recipe. When the Sunions brand claims to be tear-free, it means business: Each crop of Sunions is required to be certified "tearless and sweet" before shipping to grocery stores.

So why do regular onions make us cry? Everyday Health explains that onions contain enzymes that release a powerful gas when you cut into them. When the gas reaches your eyes, it forms sulfuric acid, which is exactly as comfortable as it sounds. The stinging irritates your eyes, making them water. The more pungent the onion, the more likely it is to leave you crying at the cutting board; yellow onions are usually the worst culprits, while milder onions like Vidalias (or Sunions) may not affect you at all.

If you have been reading this and wondering what all the fuss is about, you might be one of the lucky few whose eye chemistry doesn't react strongly with sulfuric acid. Wearing contacts can also dampen the reaction, so you might find yourself crying more often with glasses.

Currently, Sunions are grown only in Nevada and Washington state. Although they made their debut at the Produce Marketing Association's Fresh Summit in October, they aren't immediately available in grocery stores. According to Delish, the onions have been harvested already, and they will start shipping to stores at the end of December. They will be sold until the crop runs out, which should be around March or April.

Dying to know where you can find Sunions, so you can stop having to freeze your onions in advance? Keep an eye on the Sunion website, which promises to list its retailers once the onion hits stores. In the meantime, at least you know all your fellow onion choppers are in the same teary boat.