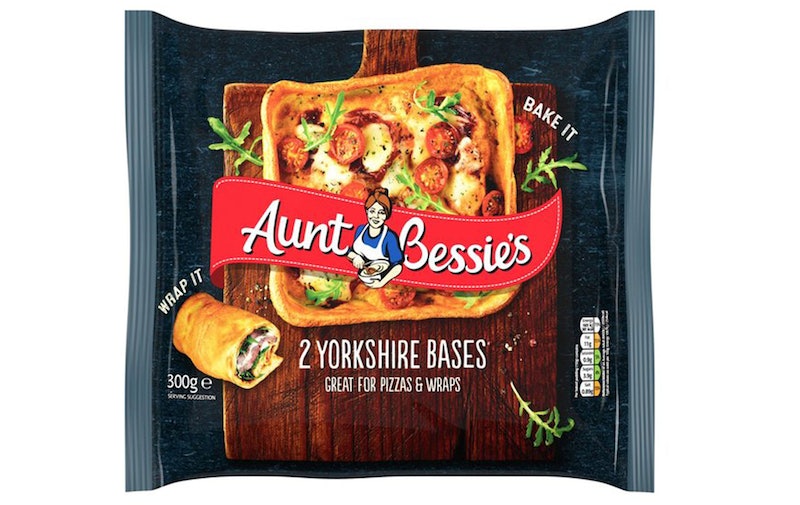 There's one thing you should know about me, and that's if you don't have at least one Yorkshire pud featured in your roast, then I'm going to be really questioning our friendship. It seems like the nation's favourite thing to sop things up with are these delightful, little fluffy cradles. But it baffles me that something so delicious is usually only eaten once a week. Now you can incorporate the puds more, and truly York up your life, since the genius that is Yorkshire pudding wraps have arrived, so here's where to buy Aunt Bessie's Yorkshire pudding wraps.

First there was Thomas Edison, now there's Aunt Bessie — and you can taste her latest invention relatively easily. There's no longer room in my freezer for anything other than Yorkshire pud wraps, and now it's time for you to stock up too. Winter is coming after all.

Lucky for you, I've kept stock of the shops which sell them. Although, since people are pretty into good things, and this is a very, very good thing, you might need to rush out soon before they're all gone. As Joe reported on Sunday, Dec. 2, Morrisons have started selling them, and according to Huffington Post, they're currently the only supermarket to do so.

But never fret. If you don't have one near by, you can order the wraps from Morissons online. Feel free to send another hundred my way. They're perfect for sneaking into the freezer at Christmas, since they're going at the very reasonable price of £1.50 for a pack of two. Morisson's have even suggested making a Yorkshire pud pizza from your wraps, which is just another stroke of genius in my mind.

Like the unicorn Frappuccino or the humble rainbow bagel, the Yorkshire pud wrap first got its legs when it went viral on the internet in 2017, according to Huffington Post. Originally conceived by The York Roast Co, the wrap got plenty of attention when the BBC showcased the splendour on Facebook in September 2017. The video currently has 25 million views, and with gravy and meat oozing out of it, a great case was certainly made for the Yorkshire pud wrap.

Now, the good news is that you won't have to haul yourself to one of The York Roast Co.'s locations in order to sample one of these beauties, but you will have to assemble them yourself at home. It seems pretty easy, but if you're into Bessie's take on the viral food trend, then you should really get out to one of The York Roast Co.'s restaurants to have the real deal.

They're peppered across the country — from Yorkshire to Salisbury — and their puds are the stuff of dreams. According to the company's website, the pud wraps traditionally hold your choice of roast meat, cabbage slaw, oodles of gravy, and a sauce of your choice. If you can make one at home with Aunt Bessie that's better than the original, then please invite me over.