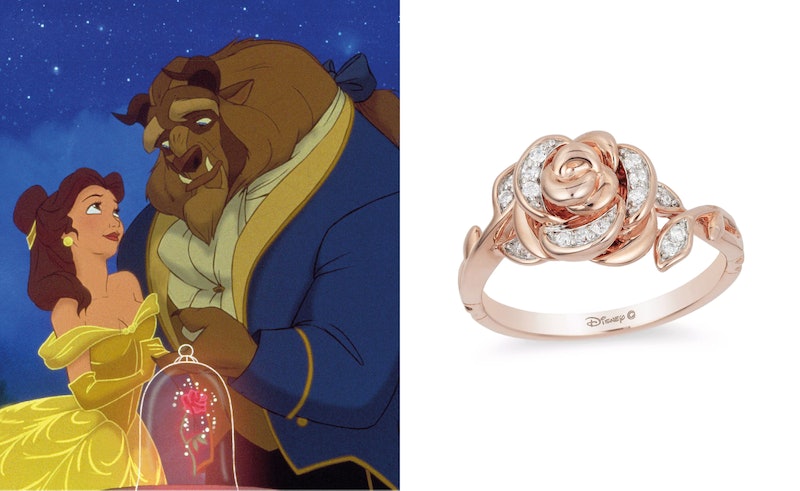 You're never too old for a Disney film and one jewellery company is cashing in on that age old saying. There's a new Disney princesses and villains jewellery line and unsurprisingly, I'm totally obsessed. I now understand what Cinderella means when she sings that song "So This Is Love," since I'm pretty convinced I need most of the collection stat. So where can you buy Disney Enchanted fine jewellery and get your hands on these princess and villain rings?

The line is currently available at H.Samuel in store and online as it dropped on October 22. While H.Samuel has previously retailed a few Disney pieces, this is one of their biggest drops and is "based on your favourite princesses and villains." (Because let's be real, Disney villains are way more stylish than their heroic counterparts.)

If you're a major Disney stan with a possible proposal on the horizon, the new line includes a range of dreamy princess-inspired engagement rings. From Ariel's under the sea amethyst ring to Mulan's minimal bamboo silhouette, it's worth casually bringing these up if you're having a big chat about your future. Obviously, there's nothing to keep you from snagging one of these beauties for yourself. You're a strong, independent Disney fan who doesn't need a man.

There's some really creative takes along the line, with Ursula's black diamond tentacles and Cinderella's carriage making an appearance as big motifs. Spanning rings, necklaces, and earrings, you'll be able to pick up something from many of Disney's biggest films. (Tangled, Hercules, A Goofy Movie and The Lion King fans, we'll sadly have to wait for another drop.)

Whether you're looking for a pay day purchase or looking for the ultimate treat yo'self reward, the line caters to all budgets with price points ranging £99.99 to £1,999. Here's a few of our favourites below and the full line can be viewed — there's just too much to fall in love with.

So this is love. This ring is a pretty clever one as it not only looks like a tiara, but also draws on the vibrant blue of Cinderella's blue and incorporates a small secret: look closely and you'll be able to pick out the shape of Cinderella's pumpkin carriage.

This shell ring from H.Samuel is a cute reference to Ariel's pink clamshell, with a purple amethyst the same shade as her top in the middle.

Easily one of my favourite pieces in the line, this Belle rose ring is definitely enchanted but hopefully the Beast's life doesn't hinge on it.

This gold ring is a riff on Pocahontas, with a string of white diamonds adding a dash of sparkle.

Merida from Brave isn't one for a fancy dress or bells and whistles, but I'm sure even she'd be won over by this ring. This silver ring is set with a blue topaz and diamonds.

Taking inspiration from the Evil Queen's crimson diadem, this ring features a blood red garnet set with a band of black diamonds. It's truly the most villainous looking ring of the lot and ergo, I'm obsessed — even if I'm not a massive Snow White fan.

We'll give you one guess who this big baddie is. Ursula has some of the coolest jewellery of the lot with these rhodium plated silver and pearl earrings, which are made to look like one of her creepy tentacles.

If you can cast your mind way back to Sleeping Beauty, Aurora's big baddie Maleficent throws up a massive wall of thorns to keep Prince Charming from getting to her. This tangled thorny ring has less drama behind it and is crafted from rhodium plated silver and set with black diamonds.