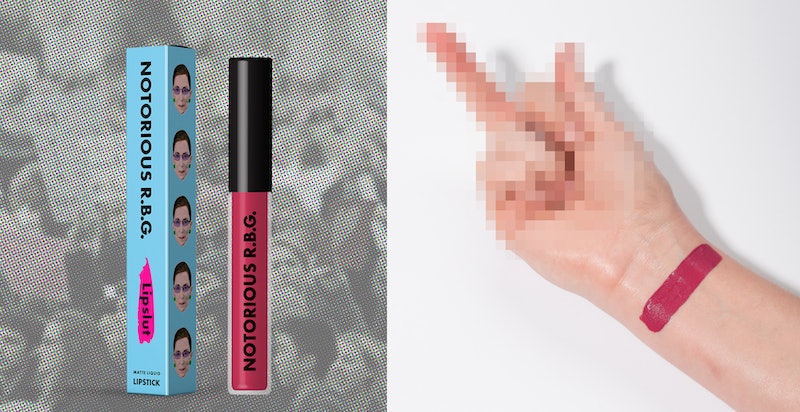 Ruth Bader Ginsburg is keeping the fate of women's rights and freedom squarely on her shoulders, and the least that she deserves is a lipstick color made in her honor. At least one beauty brand agrees with that sentiment, where Lipslut made a liquid lipstick named "Notorious R.B.G." in honor of the Supreme Court Justice.

The berry red color wasn't conceived randomly, but came about after hearing that Ginsburg, yet again, beat cancer. Lipslut is something of an activist beauty company, and it is notoriously anti-Trump and pro-civil rights charities. It was created in the aftermath of the 2016 presidential election, and is "a middle finger to the current sociopolitical landscape and practices found in the cosmetics industry," according to Lipslut's website. The brand specifically raises money for causes that are directly impacted by the Trump administration, always donating 50 percent of its proceeds to a specific cause. In fact, the company was conceived when the founder, Katie Somes, was watching the inauguration.

"I was watching Trump’s inauguration in January 2017 and I noticed so many of my friends were sharing lists of places to donate to," Sones shared with Refinery 29. "I knew a lot of people my age weren’t donating because they didn’t feel like they could give their money away. But then, at the same time, they thought they could afford to buy makeup. So I decided to bridge that gap by creating a product that could give back."

Their first product was the "F*ck Trump" liquid lipstick, which was a mauve pink lip color that gave half of its proceeds to a civil rights organization targeted by the Trump administration, chosen by the shopper.

The "Notorious R.B.G." shade is no different, which comes in a "bad bitch berry" hue that is perfect for any season. The cruelty-free, vegan formula was made "in honor of Justice Ginsburg’s commitment to equality," and 50 percent of the proceeds will go towards organizations that embody her ethos, like the American Civil Liberties Union, Equal Rights Advocates, and She Should Run.

The liquid lipstick itself has a bold matte finish that is packed with pigmentation, giving you a deep berry shade that makes a statement. The formula won't leave your lips dry as it stays on your mouth throughout the day, considering it's made with coconut oil and vitamin E, moisturizing your pout. It's also long-wearing, where the color will stay put for hours at a time.

If you like the R.B.G one, you can also collect another Supreme Court Justice shade in the form of "F*ck Kavanaugh." A matte liquid lipstick in a "cool, calm, and collected deep red," the color was created in the wake of the judge's assault allegations and donated 50 percent of all of its earnings directly to anti-sexual assault organizations.

That particular shade right now is sold out (though you can sign up for an email alert for when it's back in stock,) but you can still get the R.B.G berry version. Right now you can pre-order the color, and shipping will begin in late March, delivering the pinkish-red shade to your doorstep just in time for spring.

There's no better way to honor the Justice than by wearing her shade on your lips and donating to worthy causes in her name.