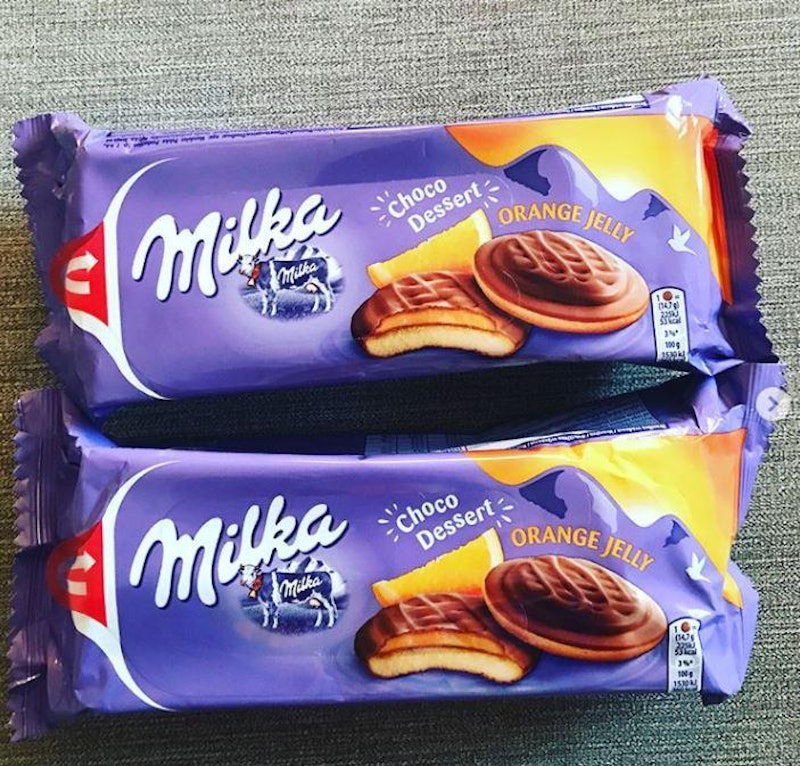 Feeling peckish? Need a sugary hit? Desperate for a naughty treat? Don't worry, there's a cake for that. Or should I say biscuit? That argument aside, huge news, looks like the genius chefs over at German chocolate giant Milka HQ have only gone and made bloomin' jaffa cakes. Stop, breathe, start again. OK babes but where can you buy Milka Jaffa cakes in the UK? And why isn't there one in my mouth RN? Well, I can answer the former imminently. Don't worry, we got this.

So, it looks like those purveyors of things you didn't realise you need but now you MUST have, Home Bargains. Yes, you heard me. Instagram account New Foods UK, who keep followers abreast of what new delights will be coming to our shores and our stores, dropped the huge news. Who would have thought that a disk of orange jelly, smothered in Milka chocolate on a little sponge cake would be quite so delicious? Hold up, I just drooled on my laptop again... OK I sorted it. Anyway, Home Bargains are selling the sweet treats for a mere 59p per pack or on special offer at £1 for two packets. Great so you can share with your best friend! You!

Things get a little better when you find out that they come in orange flavour and raspberry flavour. Say what?! Yes, a second fruity flavour. Traditionalists might be a bit irked by the additional flavour and different chocolate but boo hiss, a change is as good as a holiday and variety is the spice of life.

The reviews have been flooding in for a while now and it looks like we have some fairly happy campers.

Milka chocolate has been around for quite some time, satiating the needs of chocoholics all over the world. Since 1901, when it was created in Löerrach, Germany. The name is a clever contraction of the two main ingredients in the yummy bars, milk (milch) and cocoa (kakao). The image of the super cute little lilac coloured cow called "Lila" and lilac packaging is instantly recognisable and a real icon of German food.

Jaffa cakes have long been a family favourite, first being produced way back in 1927 by McVitie and Price, iNews reports. The unusual name comes from the Israeli Port city Jaffa, where the Jaffa oranges that flavour the jelly originated from. It has become such a stalwart of British society that it is even featured in the Oxford English Dictionary. How wild is that?

The McVitie's Northwest factory is producing a pretty wild 2000 Jaffa cakes a minute, thats 1.19bn a year, reports The Telegraph. Yes, you heard me. How many cups of tea do you reckon need to be made to support that? Oof the mind actually boggles. The Jaffa cake is not trade marked by McVitie's, World of Snacks reports, hence why the gang over at Milka were able to go wild with their new product.

Whether you're a chocoholic, cakeaholic, in need of a little afternoon pick me up, or looking for a gift to pick up for your nan, Milka Jaffa cakes are here for you and your needs.