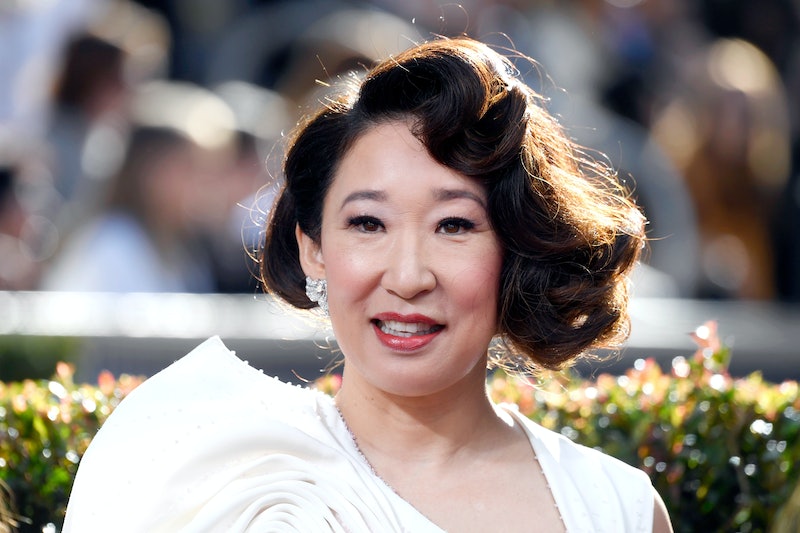 Sandra Oh has had quite an amazing week thus far and it's only Tuesday. The actor won a Best Actress Golden Globe for her work in the BBC series Killing Eve all the while co-hosting the ceremony. Also, Oh and her family wore "It's An Honor Just To Be Asian" shirts to proudly celebrate her achievements and their heritage before the broadcast.

In the image that Oh shared via Twitter, everyone was decked out in the matching tops. It was a sweet display of familial unity and love for their culture, in addition to harking back to Oh's infamous comment from the 2018 Emmys. The shirts served an additional and awesome purpose, too.

Fans will recognize the phrase on the shirt as a repeat of a memorable statement Oh made at last year's Emmys. If you recall, Oh was the first-ever Asian to be nominated for Lead Actress in a Drama Series Emmy. That night, she made a joke about it, saying, "It's an honor just to be Asian" while seated next to her mother during an interview.

She turned it into an actual fashion statement (and beyond) several months later at the Golden Globes. That phrase has now been immortalized in a t-shirt.

Sandra Oh made an instantly iconic statement — quite literally.

Before the Globes broadcast on Sunday, Oh tweeted the pic with several members of her family wearing the tees. #TeamOh

The shirts were create for a fundraiser that celebrates Oh, the Asian identity, and supports The East West Players, which is the oldest Asian-American theater company in the U.S. The fundraising effort was specifically timed around the Globes amid Oh's maximum visibility and big week. Oh made history at the Globes as the first Asian performer to win more than one Golden Globe. She previously nabbed a Best Supporting Actress award for her work on Grey's Anatomy in 2006.

And yes, fans can still purchase one of the shirts.

The black unisex shirts are $20 and over 620 have been sold already as of press time. The tees and come in sizes Youth Small through XXXL. Orders will be fulfilled about two weeks after the campaign closes.

Speaking of which, the campaign wraps today at midnight. You'll need to hurry up and scoop up a shirt on the quick. It's possible that the campaign could be extended due to its popularity, the importance of the group it supports, and the message it sends. But if you love it and want to rock it, grab it ASAP.

Many purchasers of the shirts left comments about how the top allows them to honor their identity, to celebrate their heritage, and reminds them how much representation matters. That's a beautiful thing and a potent reminder of how fashion can be a powerful agent of change.

The fundraiser and Oh's quote "align with the mission of East West Players — the theater company that has celebrated Asian American creators, performers and our shared and diverse Asian American experience for over half a century," according to the description of the shirt.

If you are not familiar with East West Players, let's remedy that. The organization was created as a space where Asian-American actors "could perform roles beyond the stereotypical parts they were being limited to in Hollywood." The organization continues with its goals and helps drive "the movement to develop, foster and expand Asian Pacific performance into a major force on the national arts scene in the 21st century, while working for increased opportunities for Asian and Pacific Islander artists on stage and in other media and introducing audiences to the diverse Asian Pacific experiences."

Ultimately, it's so much more than a shirt. It's not just a fashion statement. It's bigger than that and is a celebration of identity.