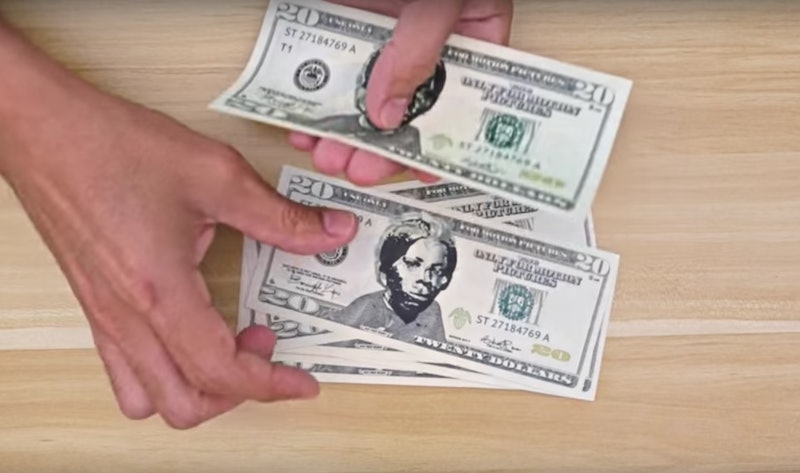 Frustrated by the U.S. Treasury's decision to delay plans to feature Harriet Tubman on the $20 bill by nearly 10 years? Well, there's a stamp for that. That's right, you can buy a Harriet Tubman stamp for your $20s and replace Jackson's portrait with an image of the legendary abolitionist yourself thanks to New York designer Dano Wall.

"Putting Harriet Tubman on the front of the $20 bill would have constituted a monumental symbolic change, disrupting the pattern of white men who appear on our bills," Wall told The Washington Post. "Putting [Tubman] on the most popular note currently in circulation indicates exactly what kind of a life we choose to celebrate; what values we, as a country, most hope to emulate. Harriet Tubman’s unparalleled grit, intelligence, and bravery over the course of her long life certainly make her worthy of such an honor."

According to The Washington Post, Wall has sold more than 600 Tubman Stamps since October but hopes to sell thousands more. "My goal is to get 5,000 stamps out there," Wall told the paper. "If there are 5,000 people consistently stamping currency, we could get a significant percent of circulating $20 bills stamp[ed], at which point it would be impossible to ignore."

Thanks to the U.S. Treasury's recent decision to push back Tubman's appearance on the $20 bill, Wall's Tubman Stamp is currently sold out on Etsy. Interested buyers can, however, sign up for restock notifications.

While the U.S. Bureau of Engraving is clear in noting that "defacement of currency is a violation" of federal law, it offers a fairly specific definition of what constitutes as defacement. "Currency defacement is generally defined as follows: Whoever mutilates, cuts, disfigures, perforates, unites or cements together, or does any other thing to any bank bill, draft, note, or other evidence of debt issued by any national banking association, Federal Reserve Bank, or Federal Reserve System, with intent to render such item(s) unfit to be reissued," the bureau's website reads, adding that violators will be punished with a fine and/or a maximum of six months in prison.

Wall told The Washington Post that he was careful to make sure that, when used properly, his stamp did not deface currency. "The basic gist of it is you can't render a bill illegible," he told the paper. "You can't cover any text or numbers or anything on it to serve as an advertisement. … Anything outside of that — if the bill is still fit for circulation is fine. You can write on it and mark in any way."

While the U.S. Treasury had announced plans to replace the portrait of Andrew Jackson featured on the front of $20 bills with one of Harriet Tubman what feels like a million years ago (Ok, it was actually April 2016), they've since revealed that a new $20 bill won't hit wallets until 2028 at the earliest.

"The primary reason we've looked at redesigning the currency is for counterfeiting issues," The New York Times reported Treasury Secretary Steve Mnuchin told members of Congress Wednesday in a House Financial Services Committee hearing. "Based upon this, the $20 bill will now not come out until 2028."

It's unclear if President Donald Trump, a vocal critic of plans to replace Jackson's image with one of Tubman, had anything to do with the delay. While campaigning for president in 2016, Trump opposed the Obama administration's plans to put Tubman on the $20 bill, telling the TODAY Show that he "would love to leave Andrew Jackson" on the bill. "Andrew Jackson had a great history and I think it's very rough when you take somebody off the bill," he said. Trump added that he thought Jackson, the president whose signature on the Indian Removal Act in 1830 forced tens of thousands of Native Americans from their lands, had "a history of tremendous success for the country."

"I would love to leave Andrew Jackson and see if we can maybe come up with another denomination. Maybe we do the $2 bill or we do another bill," Trump continued. "I don't like seeing it. Yes, I think it's pure political correctness."