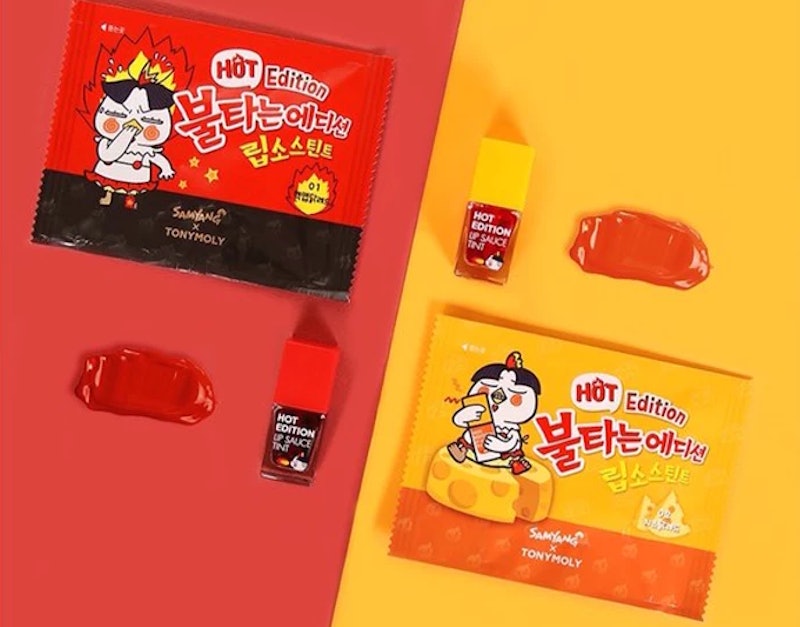 Ramen is no longer just a tasty dish you order for dinner — it can now become a permanent fixture in your makeup routine. Samyang is one of the best instant-noodle brands out there, and it is now expanding into the beauty world with its TonyMoly x Buldak Spicy Chicken Ramen makeup collaboration. Commonly known as fire noodles, they are one of the spiciest ramen available in the Korean market, marinated in a super-spicy red chili paste that will make you feel like you're inhaling fire. But most importantly, everyone is obsessed with it — which is why the K-Beauty brand TonyMoly thought it would be a fun idea to tap into that popularity and create a quirky makeup collaboration that pays homage to the dish.

Officially dubbed the Samyang x TonyMoly Hot Edition makeup collection, the packaging is meant to look like food, blurring the line between snack and cosmetics. “Through this unusual collaboration with Spicy Buldak Chicken Ramen, we are excited to launch special and entertaining products,” a TonyMoly told The Korean Herald. But don't worry, your mouth won't burn if you apply the "spicy" lipstick — the collection is mostly inspired by the packaging and the character, which is a rosy cheeked chicken with a Hanson-brother-like bowl haircut.

The limited-edition collection isn't extensive, but it's enough to incorporate red chili into your makeup bag. It will include a facial cover cushion, blusher, lip tint and lip balm.

Specifically, the Hot Coverdak Cushion is a cushion-compact foundation with the mascot on the front of the lid, blowing fire. It comes with a refill that squeezes out of a sauce packet that's made to look like chili sauce, making the instant-noodle theme come full circle. The only downside is that the foundation isn't inclusive in its shade range, where you can only choose between "Vanilla" and "Beige."

As for the blush, it's called "Noodle Blusher" and comes in two color options. One is a Carbonara sauce-like gold highlighter dubbed "Carbolighter," and the other is an aggressive red blush called "Bad Red" that look like the painted circle cheeks of the chicken.

The lip balm is one of the simpler products, where it's a clear chapstick called "Lip Care Stick." But if you want a little bit of color on your lips, then you can turn towards the Lip Sauce Tints, which come in two varying shades: "Spicy Red," which is a true red, and "Cheese Red," which is an orange and red mix.

According to The Korean Herald, the Buldak Spicy Chicken Ramen edition is already on sale at both TonyMoly's online and brick and mortar stores, but if you don't want to deal with an exorbant amount of shipping costs, there might be a more U.S.-friendly option for you to check out.

According to Allure, beautyboxkorea.com is selling the collection to U.S. shoppers, where you can get the entire line for only $25 — and you get a free packet of noodles tossed in. It is, after all, what inspired the whole capsule line!