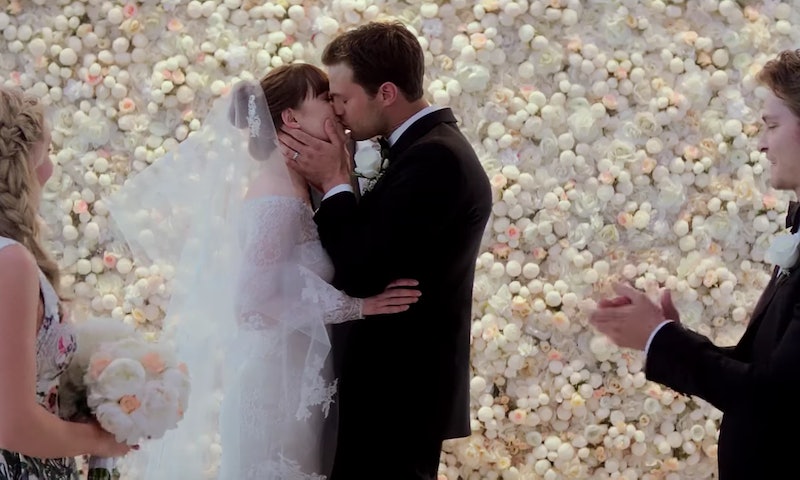 On Feb. 9, the latest installment of the Fifty Shades hits theaters, and it includes Ana and Christian trying out a whole new type of bondage: marriage. Fifty Shades Freed (producer: E.L. James) will show Mr. and Mrs. Grey saying "I do," and as per usual, Ana's style is on point. If you're trying to copy her look, here's where to get Ana's wedding dress from Fifty Shades Freed; luckily for you, the custom-made Monique Lhuillier gown is available for special order.

The dress is a gorgeous lace off-the-shoulders gown with buttons lining it all the way down its back. The gown looks lovely on Dakota Johnson, who plays Anastasia, and it fits the elegant-looking wedding in the movie. Even if Ana and Christian Grey don't always have the easiest time with their relationship, their wedding in Fifty Shades Freed looks perfect, and a huge part of that is the gorgeous dress that was made with Ana in mind.

In an interview for Harper's Bazaar, Lhuillier revealed that Ana's wedding dress was made to fit the character's style rather than introduce a completely new look. "Elegant yet sensual, the gown embodies Anastasia's persona," the designer said. In the Fifty Shades Freed trailer and photos, you can see Ana wearing the dress, looking ethereal and sexy — perfect for Fifty Shades.

This isn't the first dress for Fifty Shades that Lhuillier designed. That was the equally memorable silver dress with a feathered cape for Fifty Shades Darker's masquerade scene. The look was stunning, but, as you might remember, it didn't last long before it was flung to the floor after the auction during one of Christian and Ana's quintessential trysts. While there's no promise that Ana's luxurious wedding gown won't have the same fate, Lhuillier revealed that she designed the two gowns completely differently.

When speaking to Harper's Bazaar, the designer explained, "For Fifty Shades Darker, we were told that the silver gown needed to be easy to take off on screen. And, since Christian buys the gown for Ana in that film, we designed the piece from a man's perspective." She added, "The wedding gown was designed for Ana, and from her point of view. There wasn't much direction so we really had to think about how to best capture her character. We wanted it to be romantic, feminine and true to her taste."

Even though the gown was custom-made for Ana, you can still buy it for your own wedding. All you have to do is go to one of Lhuillier's flagship stores to special-order the Grey gown, the designer told Harper's. Don't worry, you'll still receive the beautiful white Chantilly-lace that you see on Ana, it just gets its name from the series. It would be a great dress to choose for an elegant and traditional wedding, even though there's nothing traditional about Christian and Ana Grey's relationship.

In fact, the entire series is anything but traditional, so the fact that Christian and Ana decide to married in the first place was almost more shocking than the behavior that they're best known for. Don't worry though — in the new movie, which may be the last of the Fifty Shades series, Christian and Ana find themselves in plenty of unconventional post-wedding situations like high-speed car chases, for example.

Even if Ana and Christian risk becoming overly conventional in their wedded bliss, the Fifty Shades Freed wedding scene is too gorgeous to miss. Monique Lhuillier's gown looks perfect on Ana, and who knows, maybe it could be a good choice for you too if you decide to order it after watching the movie's fairytale wedding.