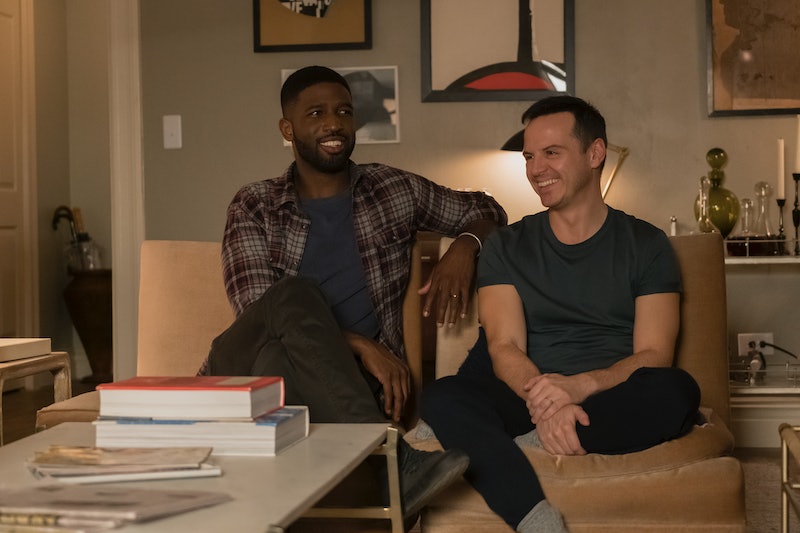 Amazon's Modern Love is leaving viewers sobbing, but once those tears have dried, fans are left with one burning question: where can you stream the Modern Love soundtrack? The romantic anthology series starring everyone from Fleabag's Hot Priest Andrew Scott to Tina Fey and Dev Patel is full of original tracks, which means assembling a playlist from scratch would be impossible. Thankfully, Amazon is here to lend a helping hand by sharing the Modern Love soundtrack on Spotify.

On Oct. 18, music producer Gary Cole, who wrote and performed many of the show's songs, revealed in a tweet that there's "at least one unreleased exclusive track per episode." The inclusion of so much new music was part of the storytelling process for the eight-episode anthology. In an Oct. 21 tweet from the official Modern Love Twitter account, the reason why the show used so many original songs was revealed to be because "every love story is unique." All of those unique love stories led to the creation of some equally special songs that fans are destined to play on repeat. The Spotify playlist will help you achieve your destiny — even if you're not a premium level subscriber you can listen to the playlist (with ads) at no cost.

The 13-track playlist includes the show's much raved about original songs like "Circus" and the Modern Love theme tune "Setting Sail." It also includes songs performed by Regina Spektor, Anne Hathaway, and The Divine Comedy. The bulk of the tracks were written and performed by musicians and producers Clark and John Carney. Clark has previously written songs for artists like Natalie Imbruglia, Gin Wigmore, and Mel C, while Carney (who is also the executive producer of Modern Love) is best known for directing musical movies like Once and Sing Street.

As of Oct. 25, the soundtrack was also available to purchase via Amazon for $9.49. Right now, you have to purchase the soundtrack in order to listen to Spektor's "Walking Away" and The Divne Comedy's "Don't Mention the War." Neither of those songs are available on Spotify (although they are listed, so it's possible that they could become available at a later date).

For now, fans will have to content themselves by listening to the other 10 tear-jerking and romantic ballads available on Spotify.