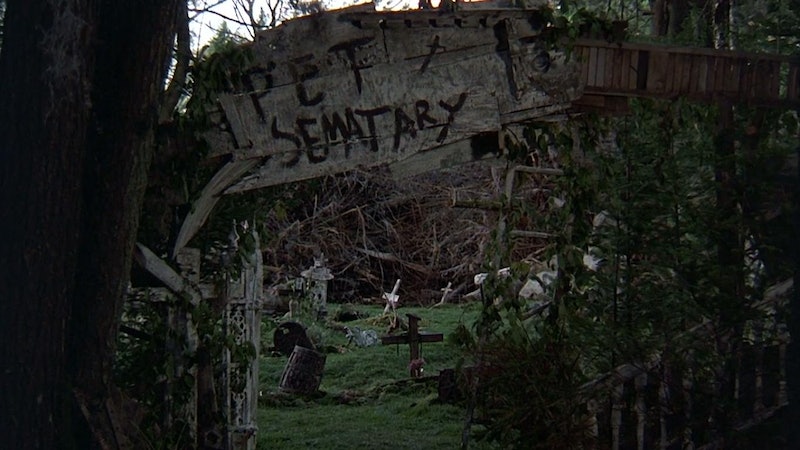 A brand new film adaptation of Pet Sematary premieres on April 5. Based on Stephen King's 1983 novel, the movie centers around doctor Louis Creed (Jason Clarke), his wife Rachel (Amy Seimetz), and their two children Gage (Hugo Lavoie) and Ellie (Jeté Laurence), who move from Boston to rural Maine, where they discover the "pet sematary" (according to the sign), a mystical burial ground that's said to bring the dead back to life. That's also the set up of the 1989 Pet Sematary movie, which you may want to rewatch or check out for the first time before going to see the 2019 version.

The screenplay for the 1989 movie was written by Stephen King himself, who also has a cameo in the movie. And though both movies revolve around a mysterious place with the power of resurrection, the two films are definitely different from one another.

Jeff Buhler, screenwriter of the new Pet Sematary, wanted to make his rendition of the film less of a straight-up gore fest, and more of a incisively terrifying thriller. He told horror blog Dread Central, “Our desire was to tell a really grounded, character-driven and psychologically horrific version of Pet Sematary, which, in my belief, is the scariest book that King ever wrote.”

But the original has its own vintage '80s horror movie charm, and a borderline campy feel that makes it a fun watch with friends. From characters like the mysterious, brooding next-door neighbor Jud Crandall (Fred Gwynne) and the ghost of student-turned-roadkill Victor Pascow (Brad Greenquist) to the look of those creepy cemetery grounds, the motion picture is a haunting rendition of King's book, with King's own vision leading the way.

The biggest difference in the plot for the new movie, as the trailer shows, is that the supernatural focus is eight-year-old Ellie. In the Mary Lambert-directed 1989 version, it's three-year-old Gage who dies and is later "reborn" as something completely new and not very pleasant.

The 2019 version, directed by Kevin Kölsch and Dennis Widmyer puts emphasis on staying true to the psychological torment of losing a child, and the gravity of that pain, as King's novel does. Meanwhile, the 1989 movie focuses more on the disastrous and gory consequences of playing God. It doesn't fail to tap into the theme of the pain of loss either, but the many shriek-inducing scenes outshine the deeper ideas.

The first Pet Sematary adaptation is straightforward, and doesn't play too many mind games with the audience. It may not follow the story told in the novel completely faithfully, but it interprets King's words into a dark and dramatic, action-packed horror movie that became a cult classic. So if you're looking for an old fashioned, screaming good time, you can stream the 1989 box office hit on Hulu. You can also check out Pet Sematary 2, which wasn't as a big of a hit and focuses on brand new characters.

Make sure you don't watch Pet Sematary alone, or have all the palate cleansers on the ready. As over-the-top as it is, it'll definitely get you in the mood for upcoming reboot.