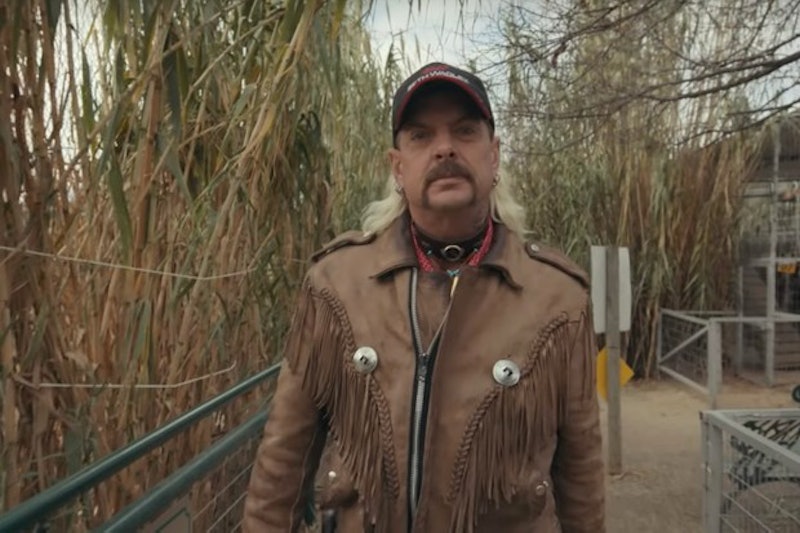 A Netflix true crime documentary series becoming a pop culture sensation isn't exactly unheard of, but the runaway popularity of Tiger King has still been surprising. The series about the mulleted, polygamous owner of an Oklahoma big cat ranch has become the most popular show on television, giving an audience that's been forced to stay inside due to the coronavirus pandemic ample distraction from the ongoing crisis outside. The series has finally given Joe Exotic the reality television fame he has long craved, but Tiger King is hardly his first foray into the genre. The currently-incarcerated zoo owner has tried to star in his own self-produced series before, so where can you watch Exotic's reality show?

When it comes to indulging in Exotic's reality TV career — if you can call it that — all you have to do is go to YouTube. There, you'll find his channel "Joe Exotic TV," which is less like a reality show and more like a stream of consciousness for whatever Exotic was into at the time. With hundreds of videos stretching back seven years, there's an awful lot of content to potentially keep you busy not only after you've finished all seven episodes of Tiger King, but maybe even until the COVID-19 quarantine is lifted.

So what kind of content will you find on the Joe Exotic TV YouTube channel, exactly? A staggeringly diverse amount. Some of the videos do almost seem as if they could have been filmed for some kind of reality series on Animal Planet or another basic cable channel — but these videos are the exception, not the norm. More frequently, you'll see installments of "Joe Exotic TV Live," where Exotic sits in a green screen studio and talks about whatever's on his mind. There are also Exotic's now-infamous country music videos, random videos from around the zoo, and a surprising amount of local professional wrestling matches.

That's not all that's highly visible on Exotic's YouTube channel. The zookeeper has run for public office twice. First, Exotic launched a bid for President of the United States in 2016. Then, he ran for Governor of Oklahoma in 2018. Shockingly, he lost both contests. There are, however, a number of (often profanity-laced) political diatribes on Exotic's channel, including a bizarre series of videos in which he addresses Donald Trump directly.

Outside of Exotic's truly bizarre YouTube channel, the big cat fanatic did manage one reality TV appearance in his life prior to Tiger King. In 2011, Exotic appeared in Louis Theroux: America's Most Dangerous Pets, a UK documentary hosted by journalist Louis Theroux. The special is not currently available to stream on any services in the U.S., though clips can be found on YouTube. In one clip below, Exotic laughingly discusses how he would shoot Theroux in the head if one of his lions got a hold of the journalist. Theroux opines that it would make more sense to shoot the lion.

Exotic is finally a reality TV star in 2020, but it's been a very long and indirect road for him to get there. If you really wish to go down the Exotic rabbit hole on YouTube to explore this road, there's certainly plenty of content there for you to binge — but you do so at your own peril.

More like this
What’s New On Netflix: Ana De Armas’ 'Blonde' & A Nick Kroll Special
By Arya Roshanian
Here's What Jeffrey Dahmer's Dad Has Said About His Other Son, David
By Grace Wehniainen
Jeffrey Dahmer’s Arresting Officer John Balcerzak Got His Job Back After Being Fired
By Grace Wehniainen
Where Is Lionel Dahmer Today? Jeffrey Dahmer’s Father Reflected On The Serial Killer’s Death In 2020
By Brad Witter
Get Even More From Bustle — Sign Up For The Newsletter