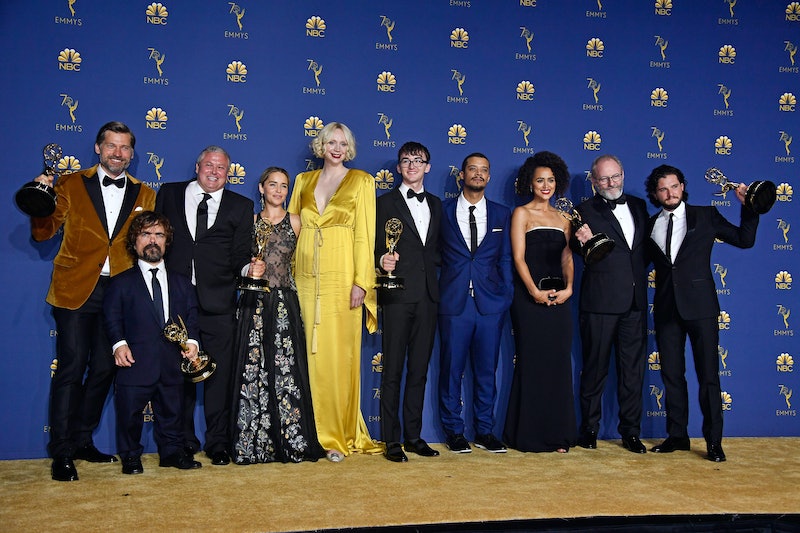 It is often said that we're living in a golden age of TV. Quality content can be binged, streamed, or hate-watched via an endless stream of programming available everywhere from Netflix to NBC, and now it's time to honor those programs with Emmys. FOX will broadcast the 71st annual Emmy Awards come September 22. But when it comes to where to watch the 2019 Emmy nominations, fans can head to a few spots.

Nominees in categories across comedy, drama, and the limited series/movie fields will be announced Tuesday, July 16 by actors Ken Jeong (The Masked Singer) and D'Arcy Carden (The Good Place). At 8:30 a.m. PT/11:30 a.m. ET, you can head over to the official Emmys website, as well as each of the Television Academy's social channels, from Facebook to its YouTube page. Plus, the nominees will be available on Instagram and Twitter. So, prepare yourself for some fiery debates over who got snubbed in any given category.

Some shows to look out for on nomination morning? Game of Thrones and Veep are likely to rack up large totals for their final seasons on HBO. While a ton of newer shows are looking to enter the fold from the long-awaited second season of Fleabag to Netflix's breakout tragi-comedy Dead to Me. Within the flow of exits and entrances, it will be fascinating to see which shows the Academy embraces.

But the 2019 Emmy Awards is also destined to be an exciting evening largely due to a plethora of hit limited series that have graced screens in the last year. Sharp Objects, a twisty tale based on Gillian Flynn's novel, as well as actors from its ensemble including Amy Adams and Patricia Clarkson are favored to garner nominations. Bio-driven series including Netflix's When They See Us and FX's Fosse/Verdon have also drummed up considerable buzz leading up to nominations.

And Oscar winner Patricia Arquette is predicted to practically dominate the Limited Series Actress categories for her turns in two true crime shows. She's already picked up Golden Globe and Screen Actors Guild awards for her leading performance in Showtime's Escape at Dannemora. Plus, she could be recognized in the supporting category for her chilling performance as Dee Dee Blanchard in Hulu's The Act.

However, there are always room for surprises come Emmy nominations day. One thing that could be announced: the 2019 Emmys host. TV's biggest night has yet to find an emcee (that we know of), so viewers will soon find out whether the awards show will follow the Oscars lead and go host-less or anoint the follow-ups to SNL's Colin Jost and Michael Che, who hosted 2018's festivities.

Ahead of Tuesday's unveiling, keep in mind that not all of your must-watch shows were even eligible for nominations this year. Per Academy rules, at least the first episode of a season must air between June 1, 2018, and May 31, 2019 to be eligible for the 71st Emmys. So, that means the new seasons of Stranger Things and Big Little Lies couldn't be considered this time around. So, we better not see #Justice4Amabella trending tomorrow.