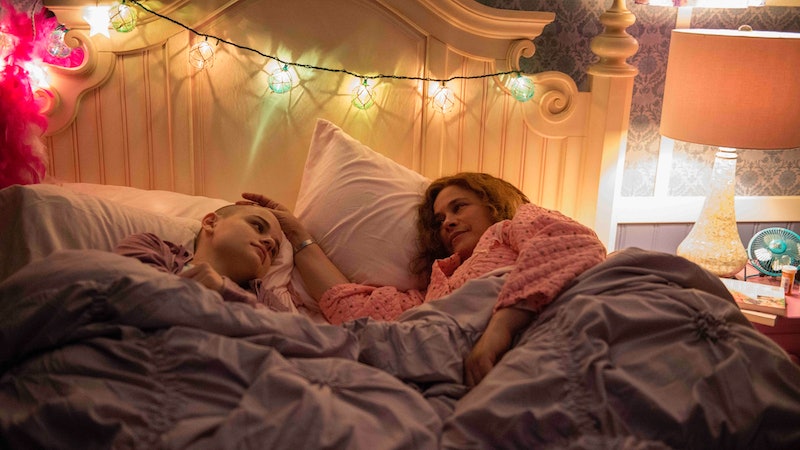 The stars of Hulu's The Act might portray a very dark and complicated mother-daughter relationship onscreen, but the experience has actually allowed to pair to form a genuinely sweet bond in real life. While speaking with E! News, Joey King revealed her relationship with The Act costar Patricia Arquette is nothing like their characters, citing their close friendship as one of the most beautiful things about starring in the difficult series.

In the Hulu thriller series, King plays Gypsy Rose Blanchard, who was convicted of murdering her mother, Dee Dee, in 2015 with the help of her boyfriend, Nicholas Godejohn. Blanchard claimed that she was a victim of Munchausen syndrome by proxy, and accused her mother of keeping her captive and forcing her to undergo medical procedures that she didn't need. Dee Dee was accused of telling doctors and friends that Gypsy had illnesses like leukemia, muscular dystrophy and epilepsy, and forcing her daughter to use a feeding tube and wheelchair and to lie about her age. And though King did note that Arquette became "family" as the pair portrayed the Blanchards' abusive relationship, she explained that the Oscar winner was very supportive and nurturing on set.

"For me, I've picked up so many friends along the way doing what I do," King told E! News, adding, "It is normal for me to stay in contact with people I've worked with, but my relationship with Patricia, I would say is very different from any relationship I've ever had with an actor on set. Her and I went through so much together and I learned so much from her. She just became like family to me."

King also explained that Arquette took on a maternal role on set, even ensuring that she felt safe and supported while filming some of The Act's more graphic scenes. "She really took a lot of care in making sure I was safe and OK on set," King recalled. The actor added that Arquette took care to make sure that she was protected during her nude scenes. "I had a couple nude scenes and she was right there making sure everyone was doing what they were supposed to do, and every monitor was turned the way it was supposed to be turned. That kind of thing."

She continued, "It means so much when someone you admire and love takes such good care of you. I got sick on set one time and she made me chicken soup. She taught me what kind people are like, you know?" King also told the outlet that she would love to work with Arquette again in the future, explaining, "My relationship with Patricia is completely unique to anything I've ever felt before."

In March, King told Bustle that her bond with Arquette made filming some of the show's heaviest scenes a little bit easier on both of them, because they could check in with each other in between takes. "[She] and I were in it together 100 percent," she says. "Every time we had these heavy scenes, we would just ask each other like, 'Hey, was that OK?' 'What’d you think of that?' or 'What can we do to make it better together?'"

Also speaking to Bustle, Arquette made it clear that their love was definitely mutual, telling Bustle that, "I was actually really grateful that they hired her because I knew she was going to do justice to this [story], and a lot of kids have died from this." Arquette also praised King's dedication to the project and hard work, even saying that she sees a lot of herself in King. "I knew she was going all in. I mean, the first day, she shaved her head and she never complained," Arquette said.

The pair's real life bond brought a lot of depth and life to their on-screen portrayal of a mother and daughter, and while the story of Gypsy Rose and Dee Dee Blanchard is a very difficult one, King and Arquette's relationship helped ensure that viewers understood exactly how nuanced and complicated it really was.