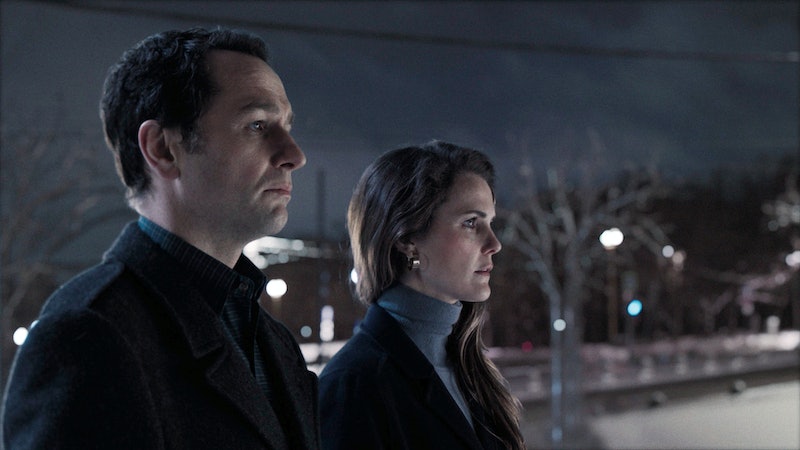 At long last, on Sunday night, The Americans won the Golden Globe for Best Drama — and just in time, as the series is over. Its win could mean that it's time to give the spy drama a revisit, or finally buckle down and commit to the show in the first place. Here's how to watch The Americans now that it's over and finally picking up trophies.

The easiest way to stream the FX series is with an Amazon Prime Video subscription. The entire series is currently available on the platform. You can also catch it on FX's own app/website with your cable information, or pick up DVD box sets for all six seasons. If Amazon Prime is not your streaming service of choice, you can see Matthew Rhys in The Wine Show and Keri Russell in Felicity on Hulu — which would make for a very fun night, but it's not the same.

The Americans made the American Film Institute's top list for five years, almost consecutively, between 2013 and 2018. Only the penultimate season was left out. They won the Critics Choice Television Award in 2015, and have been nominated for several Emmy awards — with various wins for writing, Margo Martindale, and Matthew Rhys — but this was their first Golden Globe nomination for series. How wild is that? Only the Television Critics Awards have routinely given trophies to the series as a whole.

“I rebelled in her kind of panther-like sub-fearlessness,” said Russell in an interview with Vanity Fair in August of 2018. “Elizabeth is very much an adult to me — she dresses in silk shirts, her hair’s blown out, she has tough boots on, she’s not afraid to look everyone in the eye and live in the uncomfortable, weird silences. She’s not trying to make anyone feel better about anything.” The actor, she joked in the interview, is "pretty much afraid to answer my phone."

With shows like Killing Eve and Sharp Objects also taking home trophies at the Golden Globes, fearless and angry women really were front and center. Elizabeth is so iconic, and slightly ahead of this recent surge.

"We've had a good idea since Season 2 where we want the show to end, and to our great surprise, that idea has stuck," co-showrunner Joe Weisberg said in an interview with Bustle in 2017. "Nothing about the current situation, insane though it is, is going to alter it. Even before things blew up between the United States and Russia, we always took great pains to keep current news and current events out of the show, because at the end of the day, the show is taking place in the mid-'80s, and we didn't ever want the audience to feel that we were letting the modern day interfere."

Planning a marathon of all six seasons of The Americans to celebrate their big win, better late than never? It would take three days and three hours to watch every episode with no breaks (but please, don't go that hard) — so no matter where you watch it, get to it!