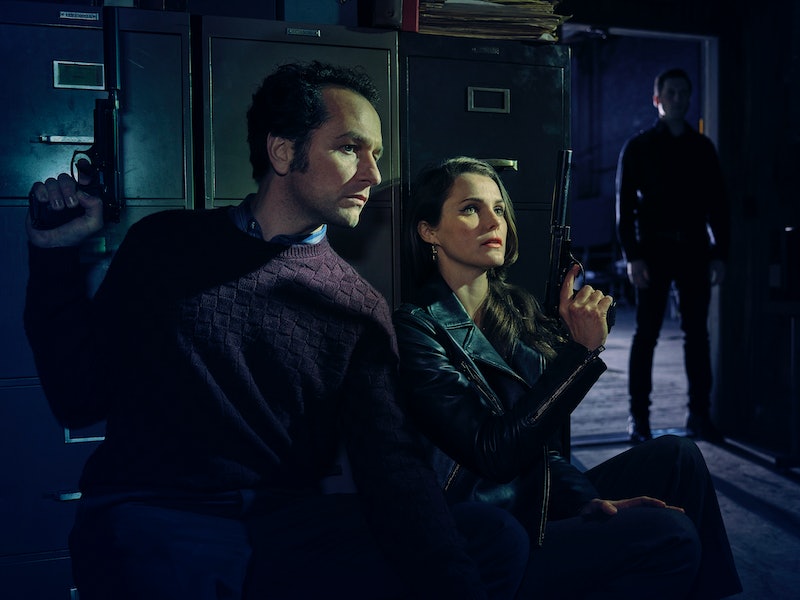 Who could possibly have predicted that, just as FX's acclaimed Cold War thriller was entering its endgame, that political friction between the United States and Russia would be heating up again? Exactly how The Americans Season 5 was affected by current events was the question on everyone's mind when showrunners Joel Fields and Joe Weisberg hopped on a conference call with reporters in anticipation of the impending premiere this Tuesday. Their firm answer? It wasn't.

Just as Season 4 of the acclaimed period drama was winding down, FX announced that an official end date for the series had been set: The Americans would be coming to an end after a 13-episode fifth season and a 10-episode sixth season. Fields and Weisberg insist that the current political climate — and the troubling question of the current relationship between D.C. and Moscow — has done nothing to change or derail those plans.

"We've had a good idea since Season 2 where we want the show to end, and to our great surprise, that idea has stuck," Weisberg says. "Nothing about the current situation, insane though it is, is going to alter it. Even before things blew up between the United States and Russia, we always took great pains to keep current news and current events out of the show, because at the end of the day, the show is taking place in the mid-'80s, and we didn't ever want the audience to feel that we were letting the modern day interfere."

Weisberg, who is a former CIA agent, also reveals that their refusal to comment on our political climate included the choice to not make any references to a certain Russian politican. He and Fields decided early on in the show's run to "not make a Putin reference, because he was just a middling KGB officer at the time. We don't want people thinking we're being clever because he's the President of Russia now."

Fields agrees with his co-producer, but is also aware of the impact current events might have on their audience. "It doesn't affect our writing of the show, or our process with respect to creating the show, but we're more and more aware that it's going to affect the viewers' experience watching the show," he says. "And that's OK because the themes are relevant, and if the specific expression of those themes is getting more relevant today, that's fine by us."

Even though the events of the final two seasons of The Americans won't be directly commenting on or drawing specific parallels to Trump and Putin, the writers are still well aware of the lessons that can be drawn from their show. "Part of the whole idea in Season 1 was that the conflict was a relic of a bygone era," Fields recalls. "So we could look at it with fresh eyes, and that could trigger us to think about why we have enemies, why we become enemies, why human beings always seem to return to this tribal 'us vs. them' stance — and we certainly could not have predicted that the very same nations would be facing off again."

"We called their country 'The Evil Empire' and we thought of people in the KGB as bloodthirsty and terrible and evil in many ways," Weisberg reminds us. So he and Fields set out to craft a show about Russian spies as "normal, relatable people doing their job; people that we could understand and connect with and relate to."

According to Weisberg, that sentiment is also one that clearly applies to our current conflicts, both with Russia and within our own borders: "If you can gain that way of looking at the world — that people who you tend to demonize are, instead of black-and-white cut-outs, complex people with good sides and bad sides, and for the most part, are much more like you than you realize — then of course you can apply that to people within your own country."

Fields stresses the importance of this moral in today's society. "The harder it is to humanize people who are doing things that feel wrong and maybe even are wrong, the more important it may be," he says. "Because if all we do is demonize, it's hard to imagine how we make progress."

Philip and Elizabeth Jennings are far from the black-and-white cut-outs that Weisberg mentioned, but the showrunners aren't worried about making their viewers feel uncomfortable for rooting for Russian spies. "We struggled with this question a lot in the first season, and it was just a big unknown," Fields says. "Would the audience follow these characters, given that they're not antiheroes — they're heroes for the other side? Can we do that? To our surprise, people seemed to go along with it. But now, these characters are so set; if [viewers] are with them by now, we feel like they'll be with them," no matter what.

At this point, I think it's safe to say that we're with them. The beginning of the end of their story begins when The Americans Season 5 premieres this Tuesday at 10:00 p.m. ET.