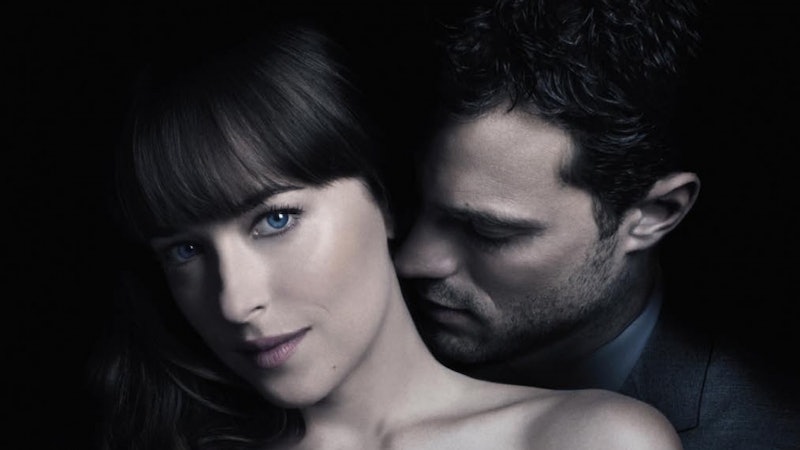 It's the classic combination of sugar and spice that makes everything nice, especially when it comes to l'amour. Fittingly, this year's national romance/most difficult table-reservation holiday Valentine's Day also marks the release of the final Fifty Shades film. If you haven't yet caught the BDSM-tinged tale of young Anastasia Steele, there's still time before the last part of the trilogy, Fifty Shades Freed, drops. Here's where to watch the Fifty Shades movies, alone or with a special someone before Feb. 14 rolls around.

The films have gotten a lot of flack from the BDSM community for repeatedly depicting violation of consent and conflating abuse with kink, and nearly as much from the literary world about the screenplays' questionable prose. There's little to disagree with there, but viewers going in fully aware of the problems are in for an evening of pretty people in wealthy settings being sexy and serious and an escapist fantasy so over-the-top it'd be hard to conflate it with anything close to reality. And with Fifty Shades Freed comes the darkest reveal yet: the series' ultimate fantasy is just the good old American Vanilla ideal of monogamous marriage, 2.5 kids, taking on your husband's surname, and a stable home life with the man as breadwinner. Hey, no kink-shaming here; everyone should get to freak how they feel.

The only film of the trilogy directed by a woman (Sam Taylor-Johnson, who after a number of public disputes with author E.L. James said she regretted even directing the one), Fifty Shades seemed to bring out the (ahem) rough side in everyone involved. The press tour was notoriously awkward, with leads Jamie Dornan and Dakota Johnson answering weird questions like "what's the sexiest kind of weather" with monotone one-word answers. Despite this, the film got the number one spot opening weekend, and more than made its money back.

Where to Rent It: Amazon Prime, Fandango, Vudu, Playstation and Microsoft all have Fifty Shades available for $2.99, though if you want to see those abs in the highest of definition, Apple has it available in HD for an extra dollar.

Where To Buy It: All of the companies above have the film available to rent for $9.99, or you can get the blu-ray on Amazon new for as little as $15.50. That's still cheaper than a box of quality chocolates, or a dozen roses.

From the director of Glengarry Glenn Ross comes another story about shifting power dynamics in the workplace. In this case, Anastasia's new boss is a serial harasser, and her former beau tries winning her back by... buying the company they both work for and firing him. Not the most Fortune 500-friendly move, but again, the film's ties to reality as we know it are tenuous at best. And at least the central drama of this film is Christian admitting he's not a dominant, he's a sadist (which again, is absolutely fine if you're up front, open and have a partner who's into it).

Where to Stream It: HBO Now and HBO Go have it available at your beck and call.

Where to Rent It: Currently no streaming services offer this film for rent, so you'll have to face your local video store clerk (if you even have a video store available in your area).

Where To Buy It: Amazon Prime, Google Play, Fandango, Vudu, Playstation, Microsoft, and Apple all have Fifty Shades Darker available for $14.99 in HD, though the unrated blu-ray is currently a mere $9.99 on Amazon, if you can stand the two-day Prime shipping wait.

Sorry folks, this one's only available in theaters starting Feb. 14. But if it's a must-see, tickets are already available to buy on Fandango so you won't come up short on Valentine's Day. And if the shows somehow sell out before you get to them, there's still plenty of ways you can generate some heat at home.

More like this
These 25 International Horror Movies On Netflix Prove Fear Is A Universal Language
By Bustle Editors
Everything You Need To Know About ‘Black Panther: Wakanda Forever’
By Bustle Editors
Lindsay Lohan & Jonathan Bennett Celebrated Mean Girls Day Very Differently
By Jake Viswanath
Christian Bale Sang With Taylor Swift & His Daughter Can't Believe It
By Radhika Menon
Get Even More From Bustle — Sign Up For The Newsletter