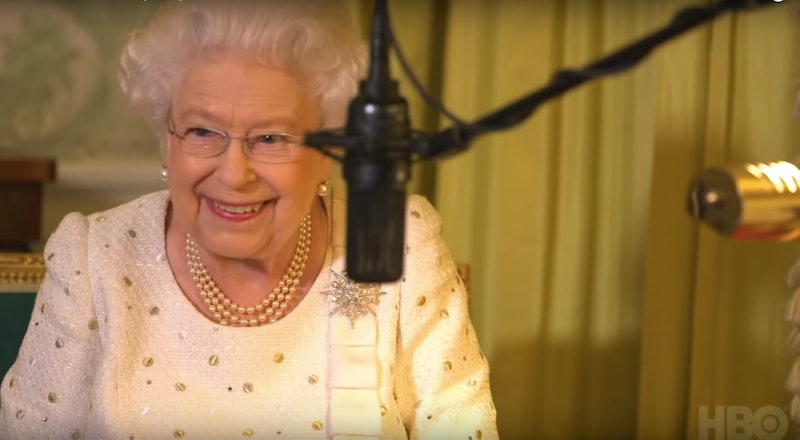 A new documentary gives fans of the royal family unprecedented access as it explores the current life and times of its reigning matriarch, Queen Elizabeth II. The Queen has spent a lifetime on the world stage, overseeing a kingdom that encompasses 53 countries and includes nearly a third of the world's population. Now 92 years old, Her Royal Highness is beginning to pass on royal duties to her grandchildren and their families, the next generation of royals. If you're wondering where to watch the Queen Elizabeth documentary Queen Of The World, it airs on HBO starting at 8 p.m. Oct. 1, and will be available on-demand on HBO streaming services Oct. 2.

Elizabethheads who can't get enough of Her Royal Majesty know how hard it is to get access, real access, to the Queen. The well-received 1969 documentary The Royal Family gave subjects a peek at her day-to-day life, but it was a decision the Queen apparently regretted, as at the end of the year the documentary was shelved and 40 years on, only 90 seconds have been allowed to screen publicly. In the recent ABC special The Story Of The Royals, royal biographer Hugo Vickers pointed out that the intimate peek might have paved the road for royals to become tabloid fodder, noting that once the public saw them as people, “They would want to know more, and more, and more.”

On the Royal Family's side, the glimpses might have been too humanizing, deglamorizing the mystique of the country's rulers by showing them as, well, ordinary people. One such scandalous moment was the reveal that instead of hand-cut glass bowls ferried from an ice cave by footmen, the Queen used Tupperware to store her food like a commoner. These days, as she watches her children's generation become wrapped up in scandal after publicly aired scandal, Elizabeth has remained available but at a formal remove from her subjects. So this new documentary is a rare return to openness for the ruler.

It also doesn't hurt that her grandchildren and their escapades have been public fodder since they were born, resulting in a generation that's not only long since gotten used to media scrutiny, but learned how to manage it to their own ends. Queen Of The World features plenty of behind-the-scenes footage of the latest royal family members to capture the world's hearts, with current Duchess of Sussex Meghan Markle showing off the "something blue" hidden in the seam of her wedding gown, a piece of the blue dress she wore on her first date with Prince Harry. Both Princes Harry and William appear in the doc as well, learning royal duties and discussing their Queen and grandmother.

One notable next-gen royal missing from the doc is Duchess of Cambridge Kate Middleton, who's nowhere to be seen. But this isn't due to any royals drama; as People reports, Kate was simply recovering from the birth of her third son Prince Louis, and couldn't make the Commonwealth Heads Of Government Meeting that the documentary centers around. Her absence may disappoint some, but note that the title is the colonialist Queen of the World, not New Royals, and there's plenty of the Queen herself in the new film.