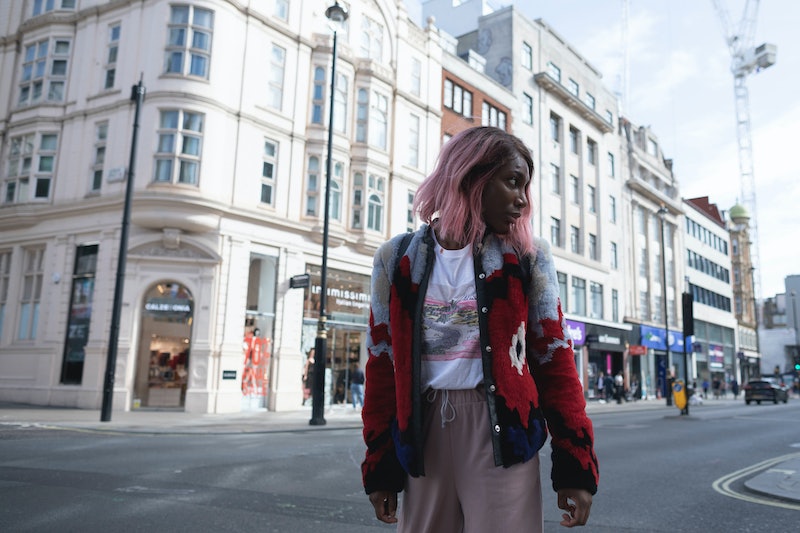 Lots of brilliant new TV will entertain us in the coming weeks, and one new show I've got my eye on is I May Destroy You, starring the face (and brains) behind Chewing Gum, Michaela Coel. The upcoming series will air on TV, as well as being streamed on a catch-up service, and once you read all about it, you'll not want to miss it. But where was I May Destroy You filmed, and what is it actually about?

The series is written, executive produced, and co-directed by Coel, who is quickly becoming one of the most revered stars in British TV. It follows the story of Arabella, a young Londoner who's known for writing a bestselling millennial book. On the night before the deadline for her second book, Arabella hits the town with friends, pushing off the final pages of her work in favour of a good old fashioned party.

However, over the coming days, she is plagued by flashbacks that lead her to realise she has been sexually assaulted during her night out. Her life changes dramatically as Arabella attempts to come to terms with what happened to her while questioning the relationships she has formed and the people that are around her, and going on a journey of self discovery.

As touched upon, the series is set in London, and many of the scenes from the trailer look quintessential of the capital city, from black cabs to recognisable streets. While I'm waiting on details over the locations the series was actually filmed in, it's unmistakably the city of London through and through, with promo shots for the show featuring backdrops from what appears to be Oxford Street and Soho (see below).

While I've not had a preview of the show, those who have have rated it highly and given it their fierce seal of approval. Time's Judy Berman, for example, praised the series for exploring the complexities of defining sexual assault, victimhood, and life as a young woman in the modern world.

"I May Destroy You isn’t ultimately about Arabella’s search for the truth of what happened to her on one harrowing night," she writes. "It’s a show that understands how we carry the entire self-constructed narrative of our lives around with us, plugging in the prejudices, heuristics and misapprehensions we’ve absorbed over the years until we’re finally forced to confront them.

"More than the story of a woman who was raped, Coel is telling the story of how a writer living an unexamined life comes to know herself."

What's more, the show sounds as though it is refreshingly real, honest, and raw. And while fictional, Coel's own experiences with being a survivor of sexual assault could have helped to inform her writing due to their similarities. Coel revealed in 2018 that she had been sexually assaulted while working on a script deadline.

“I took a break and had a drink with a good friend who was nearby. I emerged into consciousness typing season two [of Chewing Gum], many hours later. I was lucky. I had a flashback. It turned out I’d been sexually assaulted by strangers," she explained to an audience at the at the Edinburgh Television Festival.

I May Destroy You will begin on Monday, June 8 on BBC One at 10:45pm. The second episode will air on Tuesday 9th June at 10.45pm. After this, episodes will then show on Mondays and Tuesdays for the remainder of the series (12 episodes), and will also be available on BBC iPlayer.