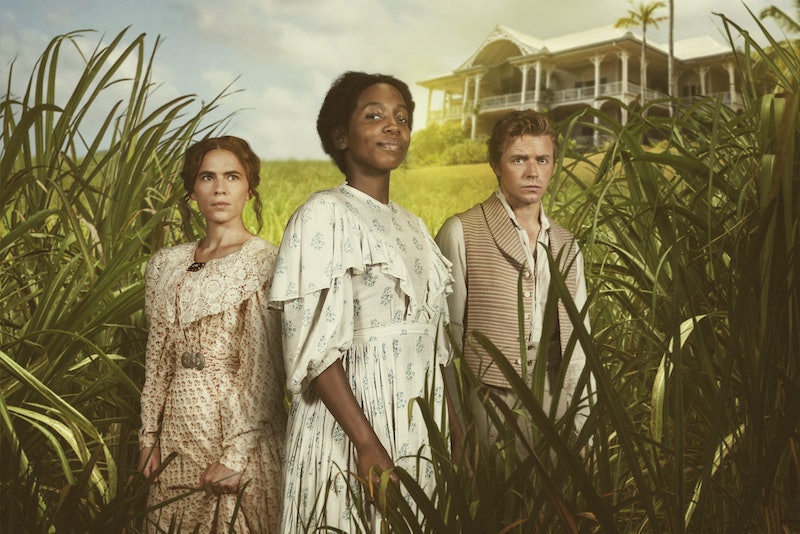 You might not have pegged Lenny Henry as a prestige drama kind of guy, but that impression's about to change. After watching the new BBC One drama The Long Song, those hotel advert associations will be long gone, as Henry's spearheading what might be one of the BBC's most important dramas in years. Its setting is also quite far from the usual British or European city that's typical to BBC One dramas. The show's brutality takes place in scenes of natural beauty, to the point where you'll probably be wondering — where was The Long Song filmed?

Set to air on Tues, Dec. 18 at 9 p.m. on BBC One, this new drama takes place in a Jamaican slave plantation. You'll follow its main character, July who was born a slave, and was "taken from her mother to a plantation house and forced to work for the odious Caroline," as the BBC bio reads.

"What we see on screen isn’t, however, Jamaica, but rather the Dominican Republic," CN Traveller writes. They also report that a few other locations were serious contenders, too— Mauritius and South Africa among them — so, either way, the cast would have got some pretty great beach days.

You won't get to experience the kind of "Caribbean Blue" Enya sings about though, as this show mainly takes place within the Dominican Republic's tall and sprawling fields. According to CN Traveller, what set the DR apart from its other tropical contenders was the fact that it has a emerging film industry. As producer Roopesh Parekh — who also worked on Poldark — told the site: "The Dominican Republic has a very young but thriving film industry with lots of American films that have left a legacy in terms of training young filmmakers."

It made for both a pretty and a convenient location, since most of the filming took place at the DR's Pinewood Studios, which is reportedly where a majority of the show's interiors were based. Sir Lenny Henry isn't even the biggest star to have performed there. According to the studio's website, it's played host to some serious classics, including one of the most famous James Bond films, Goldfinger. While more recently, it's had the pleasure of receiving the likes of Chris Evans and Robert Downey Jr., as the upcoming Avengers film was also shot there, according to the site.

However, relying on the studios hasn't compromised on The Long Song's authenticity. As Parekh told CN Traveller, the sugarcane fields in which many of the scenes were shot are still in operation. Reportedly set in Batey Olivari, somewhere in the south-eastern region of the island, Parekh recalls seeing "people cutting cane with machetes in the old way." These locals reportedly taught the actors how to cut and hold the cane correctly, making the old and new intermingle. "They live very much on the poverty line and on the outskirts of the fields. It was a modern-day version of the story we were telling," Parekh said.