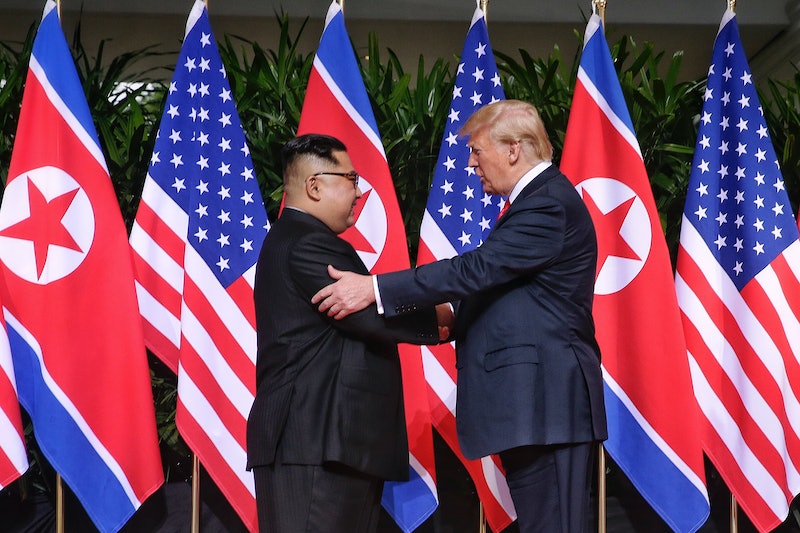 The outcome of the nuclear summit with Kim Jong Un is all but certain, but that doesn't mean Trump won't meet with the North Korean authoritarian ruler once again, and this time potentially in his hometown. That's right, round two is on the table already as a carrot in their attempts to denuclearize the peninsula. Officials have told Axios when and where Trump's second meeting with Kim might be.

If North Korea shows some progress, some administration officials expect they'd meet in New York City in September, when world leaders head there for the U.N. General Assembly. That would mean that Kim gets two sit-downs with the president of the United States in just three months. The question, then is how likely that will be.

Trump, for one, has said he's positive North Korea will take things seriously and do their part to denuclearize. He also said he's basing this on his chemistry with his counterpart. "I think they're very serious about it. I think they want to do it. We have a very good chemistry," Trump told Fox Business' Maria Bartiromo, going on to claim that he won a lot of "different points" in the discussion but that he'd "have to go over them" for specifics.

Then he doubled down on the chemistry bit. "I made a deal with him. I shook hands with him. I really believe he means it," Trump told Bartiromo.

Meanwhile reports came out over the weekend that show North Korea is doing anything but ramping down its nuclear production. NBC News, The Washington Post, and The Wall Street Journal all ran reports on the North increasing production of nuclear materials, expanding missile factories, and working to conceal other facilities and weapons.

Experts are wary. The State Department's head arms control officer in the Obama administration said that even the year timeline given by Trump's team is unrealistic. "It would be physically possible to dismantle the bulk of North Korea’s programs within a year," Thomas Countryman told The Sydney Morning Herald. "I do not believe it would be possible to verify full dismantlement within a year, nor have I yet seen evidence of a firm DPRK decision to undertake full dismantlement."

Even members of Trump's administration are taking a more cautious tone. National Security Adviser John Bolton said those working on the issue were going into negotiations well aware that the North had gone back on its word in the past. "There's not any starry-eyed feeling among the group doing this," Bolton told CBS's Face the Nation on Sunday. "We're well aware of what the North Koreans have done in the past."

And then there are Republicans like Sens. Susan Collins and Lindsey Graham who are downright skeptical. "If it is true that they are saying one thing and doing another, nobody should be surprised," Graham told NBC's Meet The Press.

But Trump keeps mentioning the wins. One that he has repeated time and again is the return of remains of American soldiers who were killed during the Korean War. Almost 8,000 U.S. soldiers remain unaccounted for from the conflict. But Secretary of State Mike Pompeo told Congress that North Korea has yet to actually send remains. "We have not yet physically received them," he said adding that he's optimistic they will soon.

Immediately after the summit, he was even more positive about where North Korea stands. "There is no longer a Nuclear Threat from North Korea. Meeting with Kim Jong Un was an interesting and very positive experience. North Korea has great potential for the future!" Trump tweeted when arriving home.

Given the word of the experts, he's still quite optimistic for the circumstances. Summit number two could just happen this fall in New York.