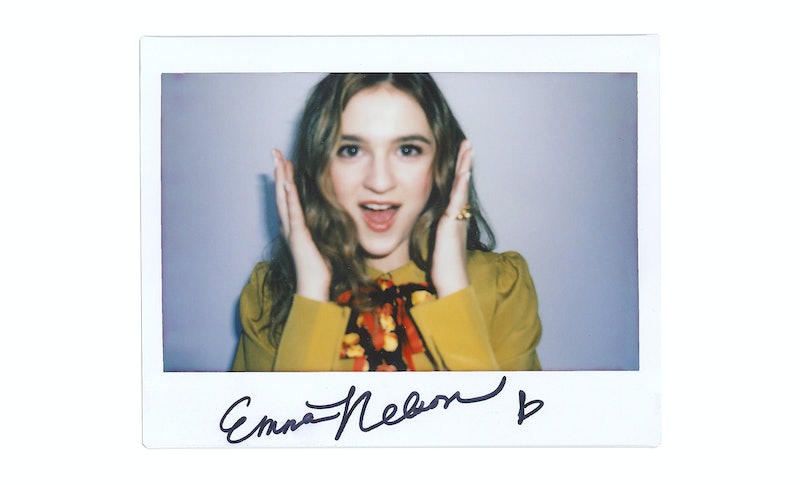 When celebrities hang out with Bustle editors, we want to give them the chance to leave their mark. Literally. So we hand them a pen, a piece of paper, a few questions, and ask them to get creative. This time, Where'd You Go, Bernadette star Emma Nelson is leaving her mark in the Bustle Booth.

Ask Emma Nelson how she transformed into her Where'd You Go, Bernadette character and the 15-year-old will name two things: a pair of glasses and a container of flute lube. When Nelson put on Bee's tortoise shell frames, which she picked out and later took home with her, "I just was Bee," she says. But, that lubricant, which was in the front pocket of her character's backpack, never to be seen onscreen, also made Nelson feel closer to Bee in a weird way.

"I’m really detail-oriented," says Nelson, who learned to play flute for the film based on Maria Semple’s 2012 novel of the same name. (Unfortunately, her playing didn't end up in the final cut.) "I always thought, 'Bee would have this and that.' It was more than the big picture stuff, but the little details," she says. "I think that’s really what makes up people, the little things that they have on them."

Finding comfort in the details is something she learned watching Cate Blanchett, who plays the titular role of Bernadette, a renowned architect who is also Bee’s mother. Where'd You Go, Bernadette is Nelson's first feature film, which the Illinois native landed after an open casting call, and having such an experienced star on set was enlightening for the teen.

"I think the way that she analyzed the script and became Bernadette is something I’ll always think about when I’m becoming a character," Nelson says. "The way she put so much thought into everything she did. There was a what and a why to everything."

The Richard Linklater movie is about Bernadette's struggle to find her creative purpose in life after dedicating herself to her daughter. But, it's also about the Type A Bee trying to forge her own path without her parents. Nelson's favorite moment in the film is when Bee and Bernadette are singing Cyndi Lauper's "Time After Time" together in the car and for the first time, she gets a sense of her mom's inner struggles.

"Bee wants to believe everything’s OK always and she’s always believing in her mom," Nelson says, "but she’s never understanding the conflict that’s going on inside her." In that way, Nelson says she could relate to Bee, who is learning as she goes along. "You have to live life forwards but it really only makes sense when you look at it backwards," she says.

Right now, Nelson is ready to move forward with her career. While she doesn't have her next project lined up just yet, the young actor is ready for whatever comes next. "I do want to continue to do this, hopefully for my career, if I’m lucky enough," she says. "I’m totally in the market and for hire." Maybe, with her next project, she'll get an opportunity to show off her flute skills.

Find out more about Nelson in her Bustle Booth below.