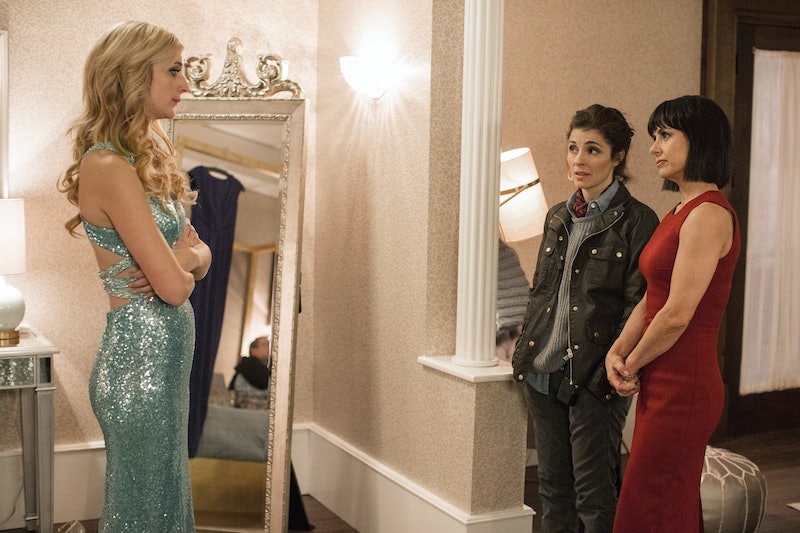 UnREAL is not only finally back on Feb. 26 for Season 3, but they're finally showing us the other side of the Bachelor coin: what happens when a woman is choosing a man on a reality show, rather than the other way around? Caitlin FitzGerald plays Everlasting's first suitress, which begs the question, which Bachelorette is Serena on UnREAL based on? The Lifetime series has drawn inspiration from a few different sources, though you may see shades of some of your Bachelor Nation favorites.

Described as the "female Elon Musk," according to Entertainment Weekly, the first "suitress" on the show is a woman who has everything except someone to share her life with — and comes on the show as a "practical" way to tick finding love off her to do list. One of the other inspirations for Serena on UnREAL is another famous powerful woman who was at the forefront of many minds in 2016, 2017, and 2018.

"I think that a lot of it was what kind of a female suitress we chose," said showrunner Stacy Rukeyser in an interview with The Hollywood Reporter, "that she is this smart, strong woman. She's not a demure kindergarten teacher. And, we started writing this back when everybody thought that Hillary Clinton was going to be the next president of the United States."

But what about inspirations from Bachelor Nation? Let's do a deep dive worthy of Quinn's ruthless producing team. None of the women formerly leading the ABC series have been venture capitalists, but some have had very intimidating resumes. There's Jillian Harris, successful interior designer and the Season 5 Bachelorette. Both Season 10's Andi Dorfman and last season's Rachel Lindsay are attorneys. Perhaps reflecting their careers, both of them brought a certain analytical savvy to the dating show proceedings.

While Rukeyser and executive producer/co-creator Sarah Shapiro told THR that they don't watch The Bachelor, Rukeyser said "there are a couple of things we hear about because they come into the conversation," mentioning Rachel's season as one of them. As for Dorfman, not only does she watch the Lifetime series, and — according to an interview with Cosmopolitan — argue with Chris Harrison about whether or not UnREAL accurately represents Bachelor life, but she's met the cast and crew of UnREAL on multiple occasions.

She also hung out with the cast this week, ahead of the Season 3 premiere. She's clearly a fan, and it wouldn't be surprising if the writers took inspo from her time on The Bachelorette and afterwards.

So even though Serena might look more like Emily Maynard or Clare Crawley than Andi, she's likely either not inspired by any Bachelorette in particular, or perhaps some combination of Andi, Rachel, and maybe even JoJo the way she has the ability to play the game to her own advantage.

“This crazy thing that I discovered when we were shooting UnREAL is that [shows like The Bachelorette are] so part of the culture," actor Caitlin FitzGerald, who plays Serena, said in an interview with TVLine, "that when it came to things like the elimination ceremonies, I knew exactly the kind of cadence and rhythm and where to take the dramatic pause. Like it’s just part of our DNA at this point, I think."

Not only is she UnReal's first female suitor, but this season also marks the first time that a suitor has truly challenged the show. "I don’t think Rachel and Quinn have met their match before, and I think my character, Serena, really can hold her own with the two of them," FitzGerald continued, in the same piece.

The Lifetime series is timely as ever. And whether or not Serena was inspired by someone from the Nation, the show is still focusing on complex women and how they're forced to deal with a patriarchal world.

More like this
JoJo Fletcher & Jordan Rodgers Got Married In A “Playful & Fun” Wedding
By Grace Wehniainen
Becca Tilley Confirmed Her & Hayley Kiyoko’s 4-Year Romance With A Heartfelt Note
By Brad Witter
What’s New On Netflix: 'Stranger Things' & 'Somebody Feed Phil' Return
By Arya Roshanian
What’s New On Netflix: A Victoria Justice Rom-Com & The Return Of David Letterman
By Arya Roshanian
Get Even More From Bustle — Sign Up For The Newsletter