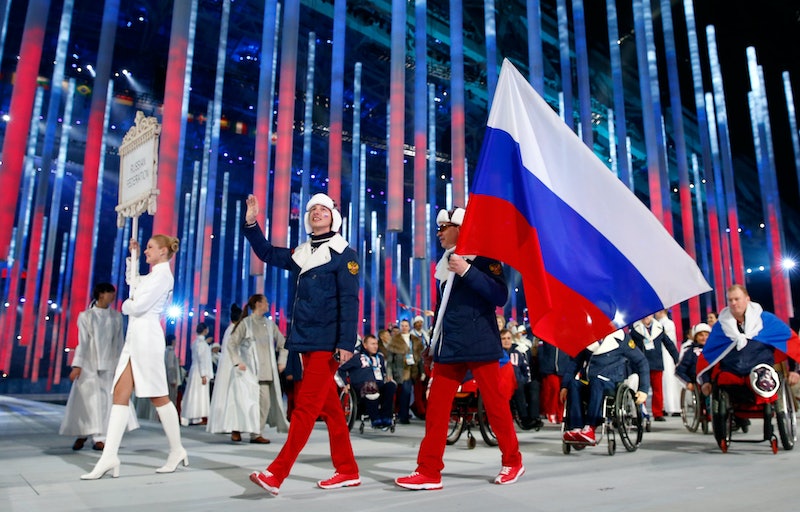 As members of each country's Winter Olympics team proudly carry their nations' flags through Friday's opening ceremony, there's one world power that won't be in attendance. Countries are banned from the Olympics for various reasons, including violating International Olympic Committee (IOC) rules or committing human rights violations. This year's no different, but the scandal keeping one country out of the 2018 PyeongChang Games is more intertwined with sports than usual.

The IOC announced in December that Russia would be banned from the 2018 Olympic Games after an IOC investigation found its Olympic team guilty of doping. IOC President Thomas Bach called Russia's actions "an unprecedented attack on the integrity of the Olympic Games and sport," explaining why drastic measures were taken to prevent the nation from competing.

However, Russian athletes who are deemed "clean" will still participate at this month's games in PyeongChang, South Korea. They'll compete as "Olympic Athletes from Russia" and don neutral uniforms. The Russian flag will not appear at the games at all, though, and the country's national anthem will not play when an Olympic athlete from Russia wins a gold medal. Still, the number of Russians competing could be as high as 168, leading some to question the effectiveness of the "ban." At the 2014 Sochi Games, 232 Russian athletes competed.

Despite expectations that South Korea wouldn't allow its northern neighbor at the PyeongChang Games, North Korea is sending a delegation this year. North Korea did not participate in the 2014 Olympics held in Russia after failing to take home any medals in the previous two Winter Games. Despite Human Rights Watch deeming North Korea "one of the most repressive authoritarian states in the world," South Korea offered an olive branch by allowing North Korean athletes and government officials to attend the games. Officials from the two Korean nations are expected to talk politics during the competitions.

It's not uncommon for one or more nations to be banned from the Olympics. Rhodesia was banned in 1972 four days out from the opening ceremony because other nations didn't recognize its statehood. South Africa wasn't allowed to participate for a whole 21 years during apartheid.

More recently, Kuwait was prohibited from attending the 2016 Summer Olympics because of legislation allowing interference in national sport federations. “The Olympic Movement in Kuwait has faced a number of issues to preserve its autonomy, in particular due to recently amended sports legislation in Kuwait,” the IOC told The Guardian at the time. Like Russian athletes this year, Kuwait's athletes were still allowed to participate under a neutral Olympic flag. The nation was previously kept out of the 2010 Games, but was allowed to send a delegation to the 2012 Olympics in London.

Similar to Kuwait's situation, India, Ghana, and Panama have all been banned in recent years for political reasons but are now allowed to compete again. India's dilemma was unique in that the IOC's ban on the nation was lifted four days into the 2014 Winter Games. The IOC was punishing India's Olympic Association for electing officials accused of corruption in 2012, but the organization let the country officially enter the competition after holding new elections. As the BBC reported at the time:

"Indian athletes have been competing at the Sochi Winter Games under the IOC flag but can now do so under their own. This is the first time a suspension of a national Olympic committee has been lifted during an Olympic Games and it comes into effect immediately."

Banning countries from the Olympics dates all the way back to 1920, when aggressor nations in World War I — Germany, Austria, Hungary, Bulgaria, and Turkey — were excluded. The practice is still alive and well today, apparent by the absence of the Russian flag at the 2018 Games.