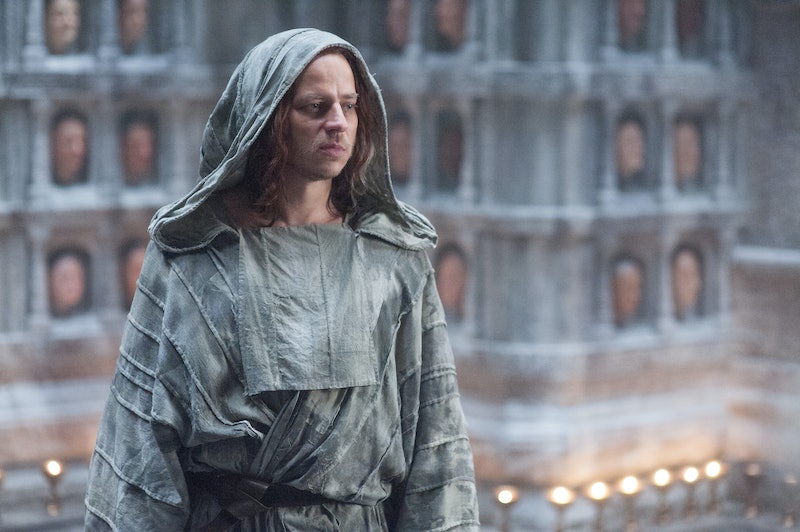 After years of sprawling, expansive storytelling, the world of Game Of Thrones feels smaller than ever in its final season, with almost every character consolidated in either Winterfell or King's Landing. But, even if they've been left behind by the show, there are still Game Of Thrones characters in Essos, just chilling across the Narrow Sea. Could any of them show up to help Jon and Daenerys in their war against the Night King?

While George R.R. Martin's novels continue to spiral outward across Westeros and Essos in ever widening circles (perhaps part of the reason it's become so difficult for him to bring the saga to a close), the first indication that the show would start condensing instead of expanding came at the end of Season 6, as Daenerys Targaryen finally set sail for Westeros. In Season 7, the map of the opening credits sequence didn't feature a single location across the Narrow Sea for the first time in Thrones history. Now, in Season 8, the map is limited to just three locations: the Wall, Winterfell, and King's Landing.

But the show left a lot of characters behind when it abandoned Essos — some of whom might prove valuable in the impending Battle of Winterfell. Could any of them show up to save the day at the last minute, like Gandalf at the battle of Helm's Deep?

Where is she? Volantis

What's she doing there? Unknown.

When's the last time we saw her? Season 7, Episode 3: "The Queen's Justice"

Will she return? Definitely. After she succeeded at bringing ice (Jon) and fire (Dany) together in Season 7, Melisandre departed Westeros — and Varys suggested that she stay away. However, she informed the Spider that she would return one last time to die in this strange country… like him. She also still has a reckoning to come with Arya, after promising the Stark girl in Season 3 that they would meet again. Could she have gone to Essos to raise an army of Red Priests and Priestesses to fight in the war against R'hllor's enemy? If so, will they show up at Winterfell, with their flaming swords blazing? Or will her return to Thrones take place sometime post-battle?

Where is she? Meereen

What's she doing there? Keeping the people of Slaver's Bay in line by delivering sermons about Daenerys' greatness.

Will she return? Maybe! If Melisandre does show up with an army of Red Priests and Priestesses, it would make sense for the High Priestess of Volantis to be among them. Kinvara seemed like an exciting new presence when she was introduced in Season 6, but she never returned after her sole appearance. This would be a great way to pay off a promising character.

What's he doing there? Counting coppers.

Will he return? Possibly! After Cersei repaid the crown's debt in full with the gold plundered from Highgarden, Tycho agreed to fund Cersei's new war effort against Daenerys, which allowed her to purchase the loyalty of the Golden Company. But the Iron Bankers are notorious gambler, and it's possible they've put money down on more than one contender. They're also notorious for hiring the Faceless Men of their city to go after people who pay to fail their debts. Speaking of…

Will he return? It's conceivable. If the Iron Banks does need to send an assassin after Cersei, what better option than everyone's favorite Faceless Man, Jaqen? Otherwise, he could also show up with an army of assassins and help turn the tide at Winterfell. (Do you think a Faceless man could wear a White Walker's face?) Maybe Jaqen could also rip off his face and reveal that he's actually Syrio Forel while he's at it!

Where is he? Meereen

What's he doing there? Keeping the peace.

Will he return? Could go either way. Ever since he was left behind by Dany with his army of Second Sons to maintain her rule over Slaver's Bay in her absence, some fans have theorized that he would eventually make the journey to Westeros to be by his beloved queen's side again. Did he smuggle himself across the Narrow Sea in the ranks of the Golden Company? Will he rally the Second Sons and come to the Mother of Dragon's defense at Winterfell? Daario seems a bit inconsequential to the plot at this late stage, but his reappearance could complicate things between Dany and Jon.

Where are they? Qarth

What are they doing there? Getting wasted on shade of the evening and plotting their revenge against Daenerys.

Will they return? I'd watch out for them if I were Daenerys. After she murdered Pyat Pree and slipped through their fingers at the end of Season 2, the warlocks seemed determined to get their vengeance, sending one of their own in the guise of a young girl to attempt to murder the dragon queen with a manticore. But surely they didn't call it quits after one botched assassination attempt? They've been quiet for years, but they must still be burning with rage against Daenerys. Her vision in the House of the Undying is a lingering plot thread that still needs to be brought full circle before the end. Might that resolution come with a vengeful warlock or two?

Where is he? Pentos

What's he doing there? Nothing much, unfortunately.

When's the last time we saw him? Season 1, Episode 5: "The Wolf And The Lion"

Will he return? He should! In the books, the Pentoshi magister is a major figure, pulling strings behind the scenes in collaboration with Varys. They've been secretly plotting the Targaryen restoration for years, and it's Illyrio who meets Tyrion in Essos and shepherds him on his way to Daenerys, not Varys. However, Illyrio was mostly excised from the show after a couple appearances in Season 1. While it would be nice for the show to tip its hat to Varys' co-conspirator, it's probably too late to reintroduce this plot thread.

Where is she? Qarth

What's she doing there? Running her henna shop.

When's the last time we saw her? Season 2, Episode 7: "A Man Without Honor"

Will she return? It would be a treat for book fans if she did, but probably not. Another remnant of Daenerys' time in Qarth, this masked mystery woman gave Jorah a couple cryptic but dire warnings before disappearing from the show. In the books, she appears to Daenerys several times over the course of many books, in dreams and in person, always delivering vague riddles and prophecies. What does she want? Sadly, show-watchers may never find out. (Book-readers might not either, if Martin doesn't get around to publishing the rest.)

Where is he? Qarth

What's he doing there? Rotting in his own vault.

Will he return? Almost definitely not. On the page, Xaro survives past the second book and reunites with Daenerys once she rules Meereen, once again offering her help — and then declaring war when she refuses it. But the show's counterpart probably won't show up again to cause any more trouble; Daenerys locked him (and her traitorous handmaiden Doreah) in Xaro's own impenetrable vault and left him to die.

Where is he? Unknown

What's he doing there? Basking in his riches and enjoying the occasional bit of piracy.

When's the last time we saw him? Season 4, Episode 6: "The Laws Of Gods And Men"

Will he return? Yeah, right. The writers clearly forgot this character existed years ago. The last time we saw Salladhor, he was being recruited back to Stannis' cause by Davos in Season 4, after the latter had secured a sizable new loan from the Iron Bank. But when Stannis and his armies showed up at Castle Black at the end of that season, the colorful pirate was nowhere to be seen… and he hasn't been seen since. I guess we should assume he accepted Davos' gold… and then sailed his ships to warmer ports. Smart man.

What's he doing there? Struggling to keep his theater troupe going after his ingénue was disfigured by his leading lady, who herself was subsequently murdered by a vengeful Faceless assassin.

Will he return? Not in a million years. But that doesn't mean I wouldn't love to see Oscar nominee Richard E. Grant (Can You Ever Forgive Me?) reprise his role as the vain thespian one last time before it's all over.