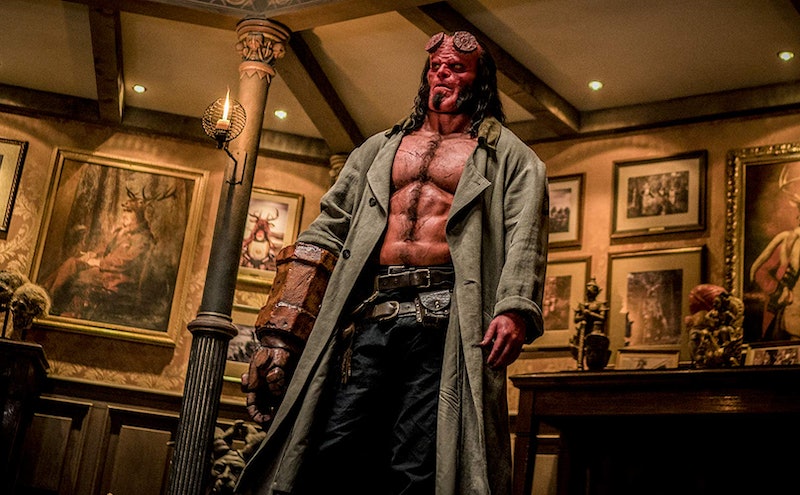 Another Hellboy movie is heading to theaters on April 12, and this time, David Harbour will be taking on the iconic character from Dark Horse Comics. That's a major change from Ron Pearlman portraying the superhero in the first two live action films (as well as additional animated versions and video games), but that's not the only redesign in the reboot of the series — the new Hellboy is said to be drawing directly from the comics in a way that previous iterations have only hinted at. So which Hellboy comics is the new movie based on?

It turns out there are three: Darkness Calls, The Wild Hunt, and The Storm and the Fury, all from Hellboy creator Mike Mignola. Mignola told Entertainment Weekly that director Neil Marshall has stayed more loyal to the comics than previous director Guillermo del Toro, whose 2004 film (also called Hellboy) was based loosely on the Seed of Destruction comic. That film's sequel, Hellboy II: The Golden Army, Mignola told EW, was less based on the comics than an original story.

“The first film was based on one of the comics, but Del Toro was looking to reinvent everything. I think the difference is here, the bulk of the [comics artist Duncan] Fegredo arc takes place in the real world,” Mignola said in that interview. “I think the bulk of the characters in the film are established in the comic. It was insane for me to walk in there and see that someone did a really nice rendering of a creature I created or Duncan created. It’s got a whole different feel from the older movies. Duncan’s not working on it, but I did see stuff in the movie that was so close to what Duncan drew, more so than what was in the previous movies. It was pretty exciting. ”

The basic premise of the reboot is Hellboy gathering his friends at the Bureau for Paranormal Research and Defense (Sasha Lane's Alice Monaghan and Daniel Dae Kim as Ben Daimio) to take on Nimue, the Blood Queen (played by Milla Jovovich). The tone is much darker and bloodier than past adaptations and, unlike the first two films, Hellboy is rated R. This is due largely to the violent narrative it takes from 2008's The Wild Hunt, which Marshall told Collider is also somewhat of a "backdoor origin story" for the half-demon with superhero strength.

“[W]e can get into who Hellboy is without the origin story structure of a comic book movie,” Marshall told Collider. “So it felt like a good starting point for a reboot. And it also gets into things that had’t been explained in the earlier movies, as well as the origin. We’re getting into not only who his father was but who his mother was. So there’s more nuance to that story as there was in those early versions.”

Jovovich's Blood Queen was first introduced in The Wild Hunt, which takes its title from the secret clan of giant hunters made up of British noblemen. In the comic and the film, they invite Hellboy to help with their age-old mission. According to IGN, The Wild Hunt comic is the middle chapter of a three-part arc, following Darkness Calls.

Darkness Calls, IGN notes, is likely to have "a more thematic influence over the movie rather than directly informing the plot" as the story is "where Hellboy starts to brush up against the truth about his origins and the terrible destiny that fate has in store for him, and finds himself unready to take the plunge." It's an introduction to what unfolds largely in The Wild Hunt, where Hellboy can no longer deny what he is meant to do, which means attempting to defeat the Blood Queen. The third part of the series, The Storm and the Fury, resolves the battle and has Hellboy fully embracing his destiny as a hero.

“It’s the last, biggest arc of Hellboy’s journey on Earth,” Mignolia told IGN. “So I wanted to make sure we were true to the mechanics of how that story worked, even though we were pulling bits and pieces from other stories.”

Although this three-part series is the major focus of Hellboy, there's actually a fourth comic that is referenced in the film. ComingSoon reports that the opening of the film has Hellboy in Mexico (also seen in the trailer), a direct storyline from the 2010 title Hellboy in Mexico. Mignola confirmed to IGN that "a big chunk" of the story from that comic (specifically, Hellboy and a group of luchadores fighting monsters) will appear on screen.

“I will say, having been on set on the other two movies, that was the first time I walked on set and saw something and said, ‘Holy sh*t, that’s right out of the comic!’” Mignola told IGN, adding that he feels "excited and grateful" that the new film borrows so heavily from the original comics in both design and story.