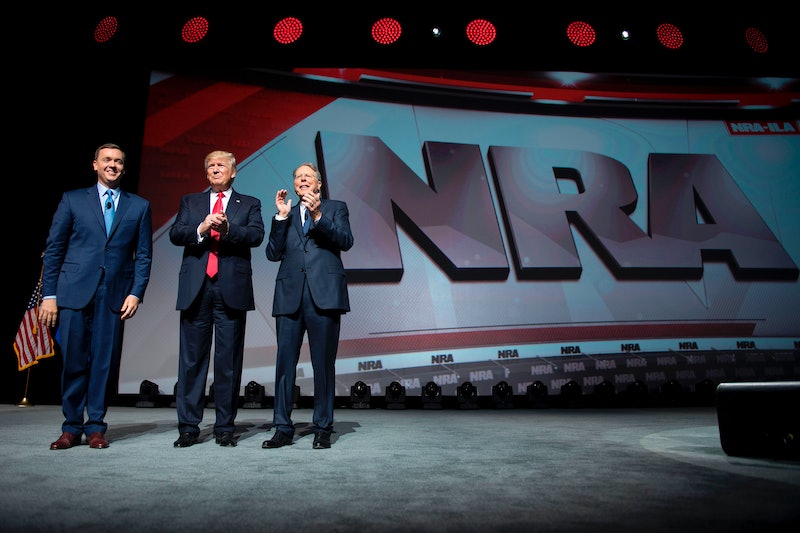 Following Sunday night's mass shooting in Las Vegas, politicians who support the National Rifle Association are now sending their "thoughts and prayers" to the victims. But gun control advocates think it's too little too late — and that actions speak much more loudly than words.

More than 500 people were injured and at least 58 killed in Sunday's attack during the Route 91 Harvest Festival, a country music festival outside the Mandalay Bay Casino. It's currently the deadliest mass shooting in modern U.S. history, and naturally, it's opened up the debate over gun control in America.

Among the politicians who've come forward to share "thoughts and prayers" is Rep. Mike Coffman, of Colorado's Sixth Congressional District. According to the Center for Responsive Politics, Coffman received $9,900 from the NRA's political action committees during the 2016 election cycle. When the congressman tweeted that his "thoughts and prayers go out to all of the victims and their families of this horrific massacre in Las Vegas," DJ and drummer for The Roots Questlove was quick to call him out.

"$9,900 from NRA," he wrote, along with Coffman's tweet. Questlove did the same thing for Kentucky Senator Rand Paul, who also received $9,900, Virginia Congresswoman Barbara Comstock, who pocketed $10,400, Missouri Senator Roy Blunt, who accepted $11,900, and a slew of other politicians whose campaigns were partially funded by the NRA, but who expressed remorse for the victims of the Las Vegas massacre.

A lot of people view their sympathy as hypocritical, since they've accepted support from a group that spends millions of dollars every year in order to keep gun restrictions to a minimum. The NRA also financially benefits from tragedies like Las Vegas, since the organization represents gun manufacturers whose sales increase after mass shootings because people fear gun control, Fast Company reported, and therefore stock up on firearms.

Below is a list of members of Congress who after accepting funds from the NRA, sent "thoughts and prayers" to Las Vegas victims in lieu of any concrete plan for reducing gun violence. All of the data comes from the Federal Election Commission and was organized by opensecrets.org and Splinter News.

Louisiana Congressman Steve Scalise (A Victim Of A Mass Shooting): $4,950

If anything, these responses to the Las Vegas shooting necessitate a call to action more than ever. If you are passionate about supporting gun control, there are lots of ways you can make your voice heard.