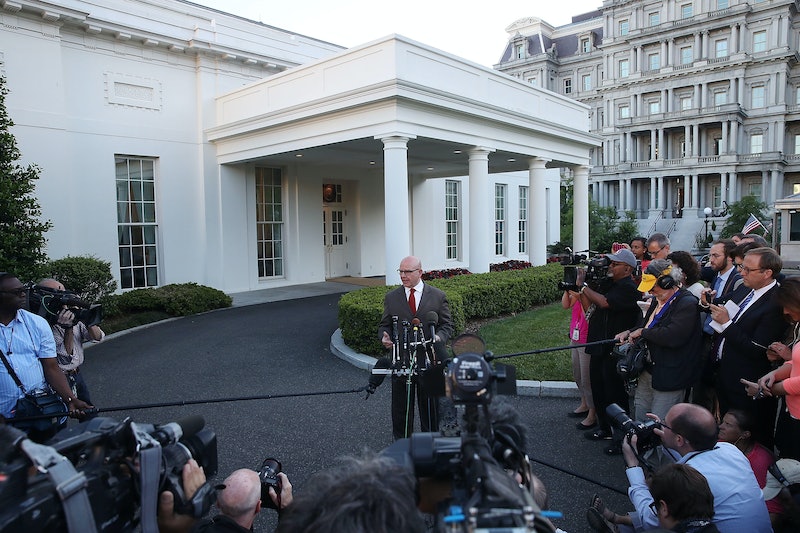 After The Washington Post published a report on Monday alleging that President Trump disclosed classified information to Russian diplomats that could potentially threaten U.S. access to future intel, White House Officials responded to the allegations in statements, denying that "sources or methods" were discussed. While speaking to reporters outside the White House, National Security Adviser H.R. McMaster said of the Post's report: "The story that came out tonight, as reported, is false."

While the Post only reported that the disclosure "jeopardized" a source and that information disclosed — particularly, a city in the Islamic State territory mentioned by Trump — may give Russians the chance to identify them, McMaster still emphasized that specific "sources and methods" weren't discussed:

The president and the foreign minister reviewed a range of common threats to our two countries, including threats to civil aviation. At no time were intelligence sources or methods discussed. And the president did not disclose any military operations that were not already publicly known. Two other senior officials who were present, including the secretary of State, remember the meeting the same way and have said so. Their on-the-record accounts should outweigh those of anonymous sources. I was in the room, it didn’t happen.

His statement was followed by another denial from Dina Powell, deputy national security adviser for strategy, who said she also attended the meeting.

In an interview on CNN's Erin Burnett OutFront on Monday night, Greg Miller, Washington Post correspondent and one of the authors of Monday's report, addressed these statements critically.

Miller confirmed that the Post's report dealt with how Trump disclosing information about the source could "jeopardize important intelligence capabilities" — particularly by "revealing the city in the Islamic State’s territory where the U.S. intelligence partner detected the threat." He also implied that the statements from the White House denying that such specifics were discussed (again, not the thing that was reported) were (perhaps willfully) imprecise.

"I think that the White House is playing word games," Miller said. "If this was all so aboveboard and not problematic in any way, why did the National Security Council coming out of this meeting feel it was necessary to contact the CIA director and the director of the National Security Agency to give them a heads' up on what Trump had just told the Russians?"

McMaster took no questions at his brief meeting with press outside the White House and soon after Deputy White House Press Secretary Sarah Huckabee Sanders advised press that there would be no more statements. However, it's clear that concerns evolving from this story will not be resolved overnight.