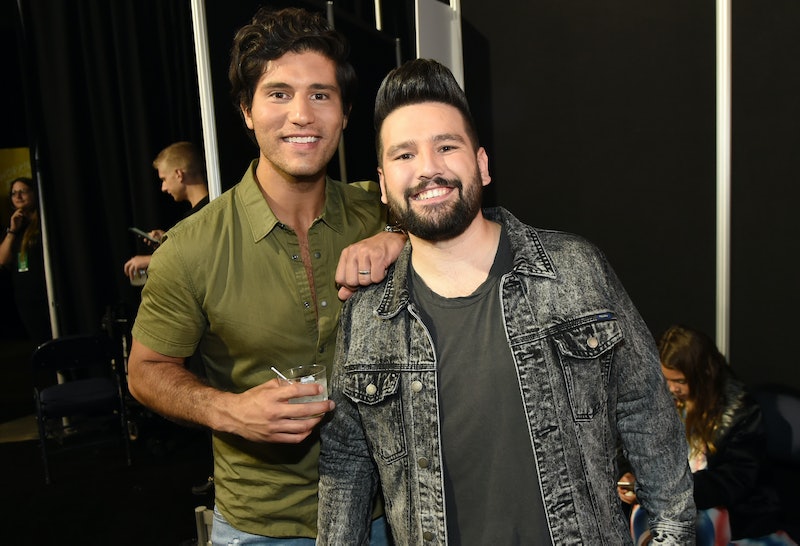 Since the 2019 Grammy Awards are right around the corner, you should probably get familiar with some of the nominees and performers. There's one duo in particular that got a lot of crossover buzz throughout last year, thanks to their song, "Tequila." So, who are Dan + Shay, you wonder? And how'd they get to be so popular? Well, the Grammy-nominated group penned a hit that appealed to both country and pop fans alike, which basically rocketed them into chart-topping stardom.

So, let's start from the beginning — the beginning of Dan Smyers and Shay Mooney's friendship, that is. The pair first crossed paths back in December 2012, when they randomly met during a party at Smyers' house, according to an interview the duo did with Taste of Country in 2013.

"I get to this party, I'm walking in this old house. It was a terrible house, of course, a typical Nashville starting-artist house," Mooney recalled to the publication of their initial introduction. "I'm walking into the living room, and there is just a tent ... it was borderline fort-ish."

Smyers then added, "I had no money to pay for heat, so I went to the thrift store and bought a bunch of sheets. [We] tented out the whole living room, and we retained all the heat in there." Wow. Way creative and super smart, right?

"We all just hung out, huddled around," Smyers continued. "Shay and I were jamming that night, and we've been writing three songs a day every since."

Two years later, one of those songs — "19 You + Me" — turned into a hit single, and the duo made their daytime television debut on The Ellen DeGeneres Show in 2014. Their careers started to take off after that, and they've managed to have a song on the Billboard Hot 100 every year since.

In 2018, though, their ballad, "Tequila," broadened their mostly-country audience to include pop fans, too. "There were people telling us before we put out 'Tequila' that it wouldn’t work," Smyers told Billboard in December 2018. "Our gut feeling was that this song was going to be big for us, and it was the right next step for Dan + Shay. So we ended up trusting our gut on it, and it paid off for us in a big way."

Stars like Demi Lovato and Shawn Mendes "reached out saying that they listen to our music, which was a really cool thing," Mooney told Billboard of the success of "Tequila." "We reached for the stars on this album, and a lot of people reacted in a big way to it outside of the country world."

Now, the track has earned them a 2019 Grammy nomination in the Country Duo/Group Performance category. Not only that, but they'll be performing at the ceremony too, which is an honor in and of itself. Regardless of whether they win an award this year, though, these guys are definitely destined for more success. Don't believe it? See for yourself when they take the stage at the Grammys on Feb. 10.