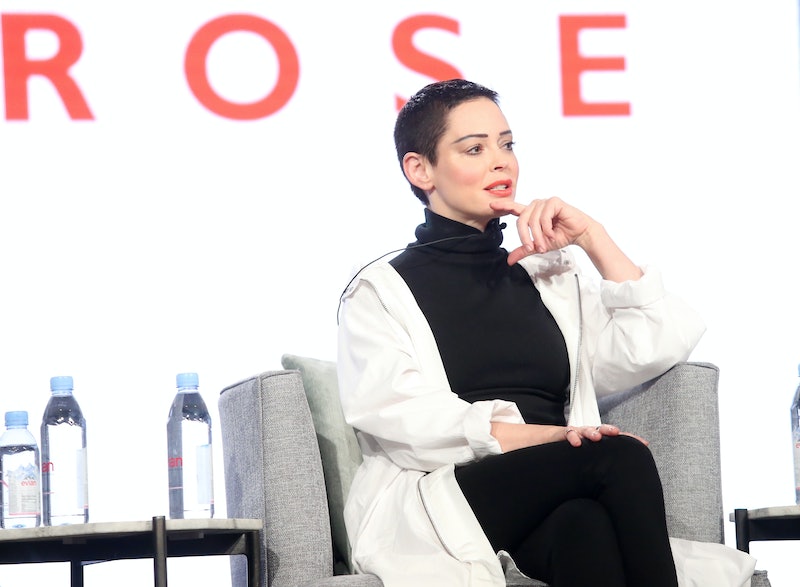 Trigger warning for discussion of sexual assault and child abuse.

Actor, director, and writer Rose McGowan has gone from being best known for starring in movies like Scream and Jawbreaker to passionately speaking out against the wave of sexual abuse and harassment accusations that have rocked the entertainment industry. Her latest project is Citizen Rose, a docuseries on E! that will explore what the activist is doing now to challenge sexism and heal from the traumas she says she experienced in Hollywood. The series also looks into McGowan's background, including her childhood growing up as a part of the Children of God commune in the Italian countryside.

The actor's family eventually left Children of God. But the group, now known as the Family International, still exists today. Per the group's website, it was founded in California in 1968 by David Brandt Berg and his wife as a Christian ministry for teens, but expanded to have a presence in cities all over the world. According to The Guardian, the FBI and Interpol investigated the group regarding claims of kidnapping, incest, and sexual abuse. A 1974 report from the New York Attorney General's office attested that child rape was common in Children of God, rationalized by Berg's "Laws of Love" philosophy of child and teen sexuality. Berg died in Portugal in 1994 while still under FBI and Interpol investigation.

Survivors and siblings Kristina Jones,‎ Celeste Jones, Juliana Buhring co-wrote a book about their reportedly abusive experience, called Not Without My Sister: The True Story Of Three Girls Violated & Betrayed By Those They Trusted. And deceased actor River Phoenix, who — along with his siblings — spent a few years of childhood in Children of God, gave a 1991 interview to Details claiming that he was forced to have sex at four years old. Many other individuals who have left the organization have spoken out.

In 2005, per The New York Times, Berg's stepson Ricky Rodriguez brought the Family back into the headlines when he killed his childhood nanny Angela Smith, then committed suicide immediately after confessing by phone to his wife. Authorities found a video he recorded before his death, which featured Rodriguez surrounded by various weaponry and promising to get justice for children like himself. His posthumous message led some to speculate that he may have been a victim of abuse. Claire Borowik, a spokesperson for the Family, told The New York Times that Rodriguez was raised in an harmless environment similar to a nudist colony, and called the organization a "Christian fellowship." She continued:

McGowan called the Children of God "a cult" when she opened up about her childhood in an interview with People. McGowan claimed that she witnessed sexual abuse while living with the Children of God, even as a very young child. "I remember watching how the [cult’s] men were with the women... [The women] were basically there to serve the men sexually — you were allowed to have more than one wife," McGowan said. "The women would go to bars as lures [and pick up recruits] — they called it Flirty Fishing." In her book, Brave, McGowan also refers to Hollywood as "a cult." She wrote that she was reminded of her early experiences with Children of God when she became an actor and observed abuse in the industry as well.

In a 1999 interview on The Roseanne Show, McGowan talked openly about the Children of God, saying that it had damaged her relationship with her mother, and that her mother "had been taught to serve men in all areas." The actor said she believes that experiencing cultural conditioning led her mother to the reportedly oppressive and sexist environment of Children of God. She also described strange rituals like being forced to learn how to snap her fingers. But that's not where the rituals ended.

McGowan claimed to People that Berg wanted to spread the message that "God made children able to enjoy sex," which rationalized the group's alleged child abuse. In Brave, McGowan wrote that this was the point when her family decided to leave the group, but needed to be careful. "When the cult got wind of certain members wanting to leave, one of their children might disappear, or some family would get severe punishment meted out to them, as a way of teaching the others," McGowan claimed.

While her series is all about rising above and responding to adversity, the actor told People that there are still lingering memories and scars from her time with the Children of God. "As strong as I like to think I’ve always been, I’m sure I could have been broken," McGowan said. "I know I got out by the skin of my teeth."