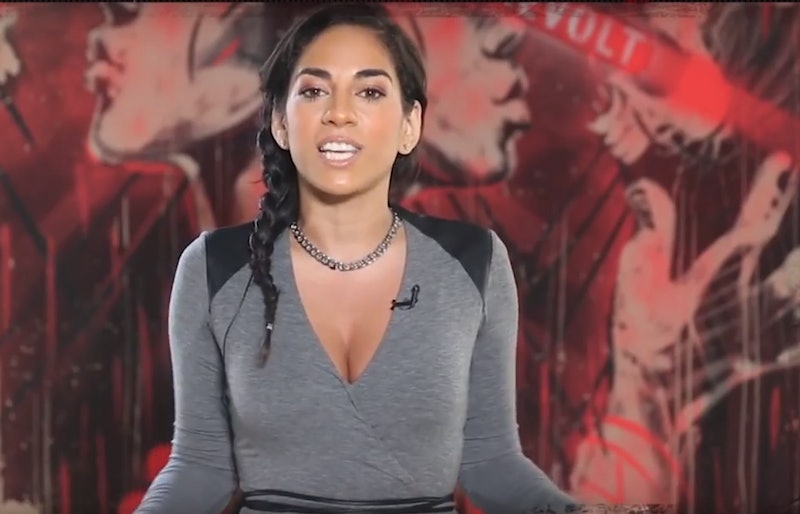 HQ Trivia is quickly becoming a viral sensation, but the iOS app isn't just popular because the players can win real cash. A big part of the draw is the show's primary host, Scott Rogowsky. However, as the app grows, so does the hosting roster. Who are the HQ Trivia hosts who aren't Scott Rogowsky? Well, at least one of them is a journalist who has worked for prestigious outlets like the BBC, CBS, and BET.

When Quiz Daddy, the name some HQ players have bestowed upon Rogowsky, isn't waiting for viewers at 3 p.m. and 9 p.m. EST, the face H-Qties are most likely to see is Sharon Carpenter's. Originally from England, Carpenter moved to New York City in 2000, and her career has been on the rise ever since. She's served as a reporter for BET News, BBC World News America, and hosted Revolt News Live.

Fans of celebrity news and talk shows should also be familiar with Carpenter. She's spent time working as a correspondent for Entertainment Tonight and The Insider. Carpenter may be best known for her gig as a regular panelist on Wendy: The Wendy Williams Show. She's even appeared in an episode of Empire as herself.

While Rogowsky's popularity among HQ devotees is hard to match, Carpenter has fans of her own. And according to a recent interview with Mashable, those fans can expect to see more of Carpenter as HQ continues to grow. Rus Yusupov, the co-founder of HQ, explained to Mashable,

"We knew immediately at the audition that she had the presentation skills and the energy that you need. I think everyone in the room felt it. She brings a level of professionalism and energy and a fun vibe."

Rogowsky and Carpenter aren't the only HQ hosts, though, and Yusupov told Mashable that he expects the roster to continue to grow with the game.

Sarah Pribis has also been known to deliver the questions to the thousands of contestants who log on to play HQ Trivia each day. Pribis is an actor and host, who appeared on The Ellen DeGeneres Show after her My Shiney Hiney infomercial went viral. She's also the producer and host of the late night show Replay. If you've been playing HQ from the start, then you've definitely seen Pribis. She's been with the app since the days when the daily prize was still $100 (it now starts out at $1,000).

Like Carpenter, Pribis is super busy when she's not presenting on HQ. In addition to hosting Replay, she's also an actor with a passion for independent film. Her upcoming projects include Clinton Road and TriFeCta.

Carpenter and Pribis aren't alone; Casey Jost has also served as a guest host on for the game. Jost's impressive background includes writing for The Jimmy Fallon Show and appearing in Above Average Presents. Like Rogowsky, Jost has a background in comedy.

Each one of the HQ hosts brings a different energy to the game. For instance, while Rogowsky is known for his savage question shout-outs, Carpenter seems to be all bout the fun facts. As the lineup of hosts continues to grow, it's likely the personality of the game will change too. The way Yusupov sees it, HQ is just getting started. He told Mashable,

"I think HQ is known for the gameplay. The personalities are a big part of that, but on the team, we put a lot of energy into making it a really compelling game experience. That's in the branding, in the sound design, in the animations, the way the phone vibrates when you've got 3 seconds left."

Whatever the future holds for the addictive trivia app, HQ's team of talented hosts is definitely a big part of the game's appeal.