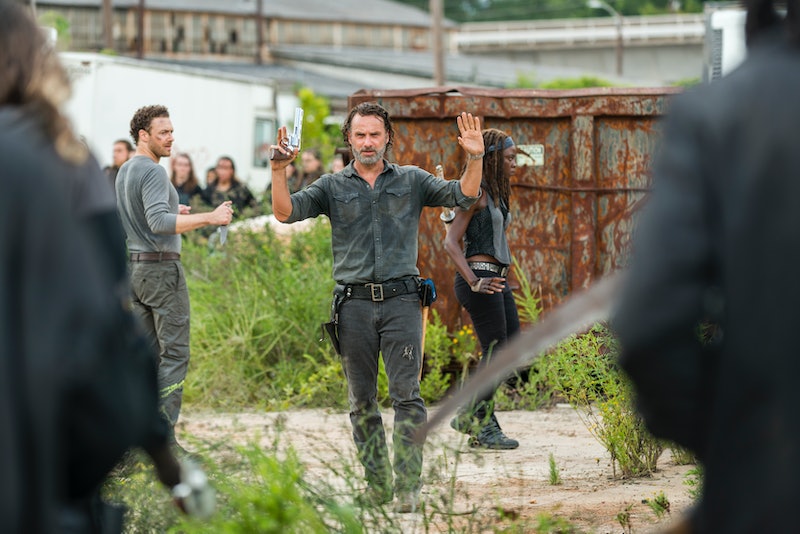 There are a lot of conflicting emotions in The Walking Dead Season 7, but it wasn't until the midseason premiere on Feb. 12 that viewers finally found something that had been missing in the first half of the season: hope. Despite Rick Grimes being surrounded by people with weapons aimed at his face, his smile in the final moments of "Rock in the Road" said a lot. It’s time to fight and stop cowering with fear. But if that new group on The Walking Dead is the Whisperers, as many fans suspected, Rick has no reason to smile.

In case you missed the very end of the episode. Rick and some others set out to find Gabriel, but were quickly stopped by a group we haven't seen before. They surround Rick's crew, weapons held high, but then Rick smiles as the episode ends. Though the Whisperers are introduced later in the comics, fans wondered if this group was the first look at them on TV. In an interview with Entertainment Weekly shortly before the midseason premiere, executive producer Greg Nicotero suggested that the person we saw watching Rick earlier in the season was part of a new group we'd eventually meet and said, "We’ve teased this mysterious stranger that was at the lake and followed them back to Alexandria, so we don’t know much about that group. We don’t know if they’re good guys. We don’t know if they’re bad guys." So it's possible that the mysterious person wearing boots belongs to this group.

And in November, when there were rumors that a teased new group (who turned out to be Oceanside) would be the Whisperers, showrunner Scott Gimple told ComicBook.com, "I will also say, though, that it's not impossible that the Whisperers could come along or aspects of them could come along earlier than the timeline of the book, but certainly not this early." Is a few episodes later still too early? Here's everything you should know about the Whisperers to help you identify them when they appear on The Walking Dead, if they haven't already.

They're One Of The Last Major Groups

The comics are still going on, but out of the major groups Rick's group happens upon, the Whisperers are one of the most recent. They stick around for awhile and play an important role in the story, although in the comics, they are not part of the giant battle against the Saviors that the AMC series is clearly building towards.

The Whisperers Are Not Good Guys

No, the Whisperers are not friendly people. In face, when the Savior war ends, they become the comics' new antagonists.

This group actually wears the skin of the walkers on their face to blend in and go unnoticed among the dead. It's a solid strategy, but still pretty disgusting.

They're Lead By A Woman Named Alpha

This group is led by a bald woman called Alpha and she’s terrible. She's very intelligent, but also incredibly cruel and abuses her own daughter, Lydia.

Carl Ends Up Getting Close To A Whisperer

Eventually, Lydia ends up at Hilltop, where she forms a friendship with Carl that soon turns into a relationship. For a while on the TV show, it seemed like Carl was heading towards a romantic storyline with Enid, but if the Whisperers are coming anytime soon, that may not happen.

They Have A Creepy Introduction

The Whisperers first appear after the Savior war has ended, when two Hilltop residents think they hear the walkers whispering to one another. One of the Hilltop men was killed and the other one was just terrified that the zombies were speaking to each other. It was then revealed to be the Whisperers, wearing walker skins, and this is clearly a very different introduction than the group in the midseason premiere.

Based on what the comics reveal about the Whisperers, that's probably not who Rick met on the latest episode of The Walking Dead. But at least now when they do arrive, we'll know what to expect.

More like this
Netflix Shut Down 'Bridgerton' S3 Rumours About A “Very Dark” Storyline
By Bustle
'The Last Of Us' Has Officially Been Renewed For Season 2
By Darshita Goyal
Michaela Coel Has Some *Thoughts* About The Nepo Baby Discourse
By Maxine Harrison
'The Traitors' Is Officially Being Turned Into A Board Game
By El Hunt
Get Even More From Bustle — Sign Up For The Newsletter
From hair trends to relationship advice, our daily newsletter has everything you need to sound like a person who’s on TikTok, even if you aren’t.