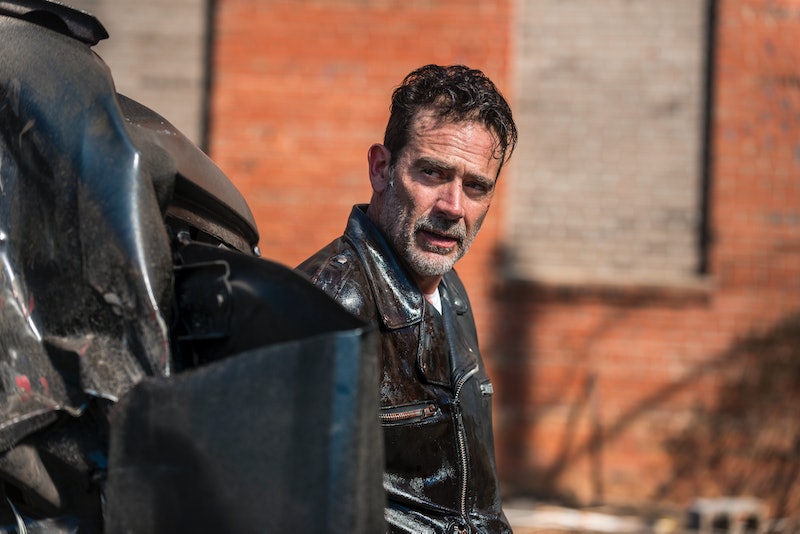 Negan had a brief, unplanned hiatus as leader of the Saviors, but he's back in action. Spoilers for "Still Gotta Mean Something" follow. Jadis lets Negan go during the April 1 episode and as he returns to the Sanctuary, Negan picks someone up on The Walking Dead. The identity of the person isn't revealed and fans should be anxious since Negan having a buddy isn't really good for Rick and crew. Yet, Negan also needs to take back control of his Saviors before he can be ready to fight the Hilltop again. And so, his mystery friend may also somehow be able to assist in that.

If you have been feeling sorry for Negan since he was left for dead by Simon, then perhaps you're happy that he has an ally by his side as he rolls up to the Sanctuary. But most people probably are worried about who he has in his car. The fact that The Walking Dead is making the person's identity a secret means it can't be good news. The only thing viewers know is that the person was walking somewhere between the junkyard and the Sanctuary and that they look really rough. After all, Negan says to them, "If sh*t could sh*t, it still wouldn't look as sh*tty as you" before he invites them to get into his car.

Because of his greeting, it seems most likely that it's a lost Savior. But Negan has a very good reason to be mad at the Saviors. Not only did he sort of figure out that someone went against his wishes and killed the Scavengers, but he was also abandoned by his people. So it's no wonder that when he rolls up to the Sanctuary, he says he wants to keep it a surprise from the majority of the group. Because he's on a mission to find out who disobeyed his orders and betrayed him — and he's going to teach them one his sadistic lessons.

Yet, even with his anger towards his people, there doesn't seem to be anyone else that he would welcome into his car so easily. So, it makes sense that it's probably a Savior who has been missing. That would explain why they look so rough and also why Negan has no ill feelings toward them. If you thought that Jared magically survived that zombie attack and that he is who Negan picked up, Talking Dead confirmed that he is officially dead. So one of the last logical answers is that Negan picks up Laura.

If Negan's mysterious companion is Laura, that would lead to a whole lot of trouble for one specific person — Dwight. Before Laura seemingly died, she had discovered that Dwight was the Savior feeding information to Rick's group. Dwight returned to the Saviors after Tara hunted him down, but even though Daryl is skeptical, he really does seem to be on the Hilltop's side. Tara even trusts Dwight now; he hit her with an arrow that wasn't contaminated in walker blood, which she sees as evidence of his loyalty to their group. Right now, Dwight is tricking the Saviors, but if Laura returns to the Sanctuary, there's no way that his role as a double agent won't be exposed.

Negan is already going to be angry at Dwight since he took charge with Simon after Rick attacked Negan. Dwight would have had some leverage since Simon was the mastermind of that betrayal plan. But if Laura is Negan's new passenger, then Dwight will be the recipient of Negan's wrath — and he won't get off easy with an iron to the face like last time. In that case, his only hope may be Daryl, who is spying on the Sanctuary with Rosita. Daryl isn't convinced that Dwight is genuine in his remorse — even with Tara surviving his arrow. However, Daryl has already made some major mistakes in Season 8, so perhaps he'll realize that Dwight is now a person worth having on their side and help him escape from Negan's clutches — just like Dwight's wife did for Daryl. Of course, this scenario only makes sense if Laura is the one in the car with Negan. And if it's someone else ... well then, fans should do their best to prepare themselves for the unexpected.