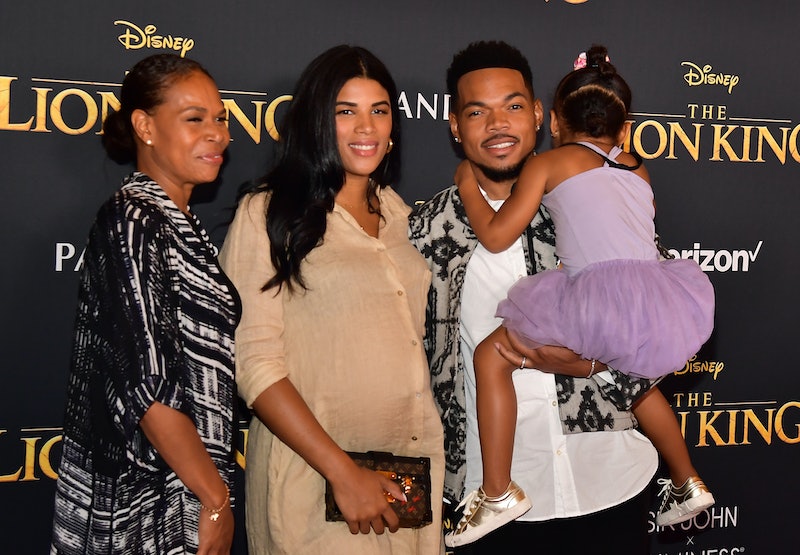 The new Lion King hits theaters on July 19, and in addition to revealing the long-awaited photorealistic leonine versions of stars like Beyoncé, Donald Glover, James Earl Jones, and Alfre Woodard, the film also features Chance the Rapper as... Chance the Bush Baby. Say what? Chance the Rapper's Lion King character is technically listed as being a bush baby, which is a small, nocturnal primate common in Africa, but Chance was much more involved in the production than just that one credit suggests. Listen hard when you see the film, because the artist was brought into The Lion King during the editing process and provided sound effects for various ancillary animals — bush baby included.

While appearing on The Tonight Show Starring Jimmy Fallon on July 16, Chance, who's credited in The Lion King as Chance Bennett (his full name), explained his post-production role with the help of air quotes. "[I was] kinda like a 'nostalgia consultant,'" Chance told Fallon. He earned that role by being particularly well-versed in the storyline. Chance is a self proclaimed "huge fan" of The Lion King in its many forms. His friend Donald Glover (Simba) passed the information about the Chicago rapper's fandom to The Lion King director Jon Favreau, who then invited Chance to the editing suite. Then, Chance told Fallon, the rapper ended up doing "a little bit of slight vocal work."

Chance elaborated, "You won't know it's me. It's very weird, it's like I do a lot of the background noises." He added that he can be heard "in very small parts, if you see like an antelope grazing... I'm so serious right now," he said when the audience laughed. Then Chance gave the Tonight Show audience a look at his impression of an antelope grazing, and it is pretty impressive.

It may baffle some fans that one of the most popular contemporary rappers participated in this production but didn't play a big, definable role. It seems that Chance the Rapper really just wanted to be a part of the film in any way he could. The Coloring Book rapper explained in a heartfelt Instagram post, "I grew up my whole life obsessed with all things related to The Lion King; like all three films, the Timon and Pumbaa tv show, the broadway play and especially the broadway soundtrack. Needless to say the original film was immensely impactful on my music and overall life."

In an interview with The New York Times published on July 17, Chance the Rapper said, “I always likened Mufasa to my dad." He added, "My dad’s alive which is great, [but Mufasa] was a lot of young black boys’ depiction of growing into manhood." Hearing this probably won't surprise Chance's fans, of course, as the rapper has name-dropped Mufasa numerous times, like on 2016's "Blessings (Reprise)."

When the Times asked if his next album, The Big Day, due out July 26, will include a Lion King reference, Chance said, "Absolutely." So it's only right for this new version of the Disney classic to have involved its very famous number one fan.