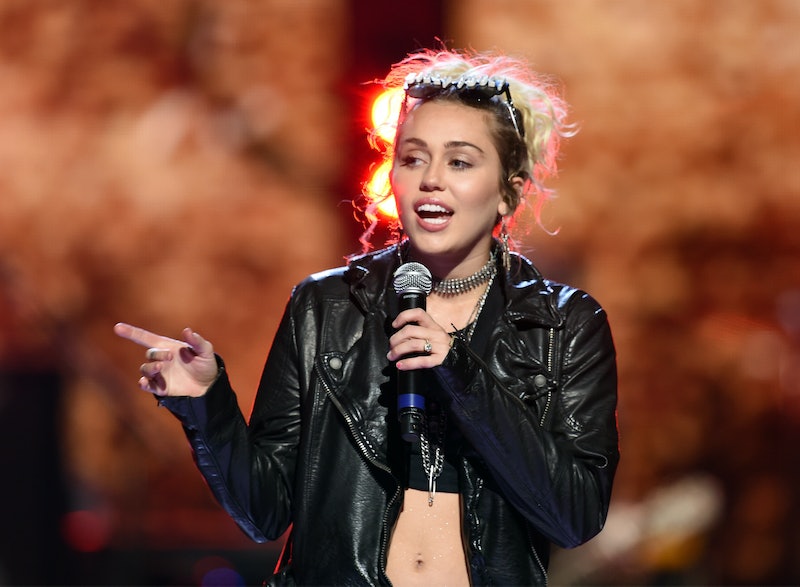 Guardians of the Galaxy: Volume 2 is filled with cameos. There's Sylvester Stallone, Ving Rhames, Michelle Yeoh, David Hasselhoff, Seth Green, Stan Lee, and even Miley Cyrus. The singer's cameo is by far the most brief and easiest to miss out of all of them, so if you did indeed miss it, then you're probably asking, who does Miley Cyrus play in Guardians 2? She's obviously not too important to what happens in the movie, but there is a chance that she could show up in a future Marvel movie, so it's best to be familiar with her character.

Spoilers ahead! Cyrus shows up, or at least her voice does anyway, in one of the film's five post-credits scenes. She appears as a disembodied robot head named Mainframe alongside Stallone's Stakar Ogord, Rhames' Charlie-27, Yeoh's Aleta Ogord, Michael Rosenbaum's Martinex, and a CGI alien named Krugarr. Stakar and Martinex have a couple of scenes together in the film, and it's made clear they're both Ravagers. Charlie-27 and Aleta both make their first appearance at the very end of the movie, where it's revealed that they each lead their own faction of Ravagers. Mainframe, however, and Krugarr, don't appear outside of their one post-credits scene. So just who are all these weird characters?

In the film, it's revealed that Yondu once had a team that was similar in nature to Peter Quill's Guardians team. These characters make up that old team, and their scene shows them reuniting after an unspecified number of years. They are meant to represent the original Guardians team from the comics, which counted Stakar, Yondu, Aleta, Charlie-27, and Martinex as original members. Cyrus' character of Mainframe, however, is a unique choice to add to the mix.

In the comics, there are actually several different characters named Mainframe. The one portrayed by Cyrus is a gender-swapped version of the one who hails from the alternate reality of Earth-691, which is the same reality in which Yondu's original Gurdians of the Galaxy reside in the comics (regular Marvel Comics continuity takes place in the reality Earth-616). This incarnation of Mainframe is a future, alternate version of the Avenger known as Vision, who evolves into the form of Mainframe and controls an entire planet as its operating system. While never technically a Guardian of the Galaxy, Mainframe was (alongside Martinex and some other even more obscure characters) a member of the subgroup, The Galactic Guardians.

Mainframe is a pretty deep cut as far as Marvel characters go, even for the Guardians of the Galaxy, but there's still a chance that Cyrus could reprise her role in a future Guardians film. It would be quite the tease to see her and the rest of the original Guardians in the post-credits scene of Guardians 2 and then never see them again, so here's hoping that Mainframe has a role to play in Guardians 3.