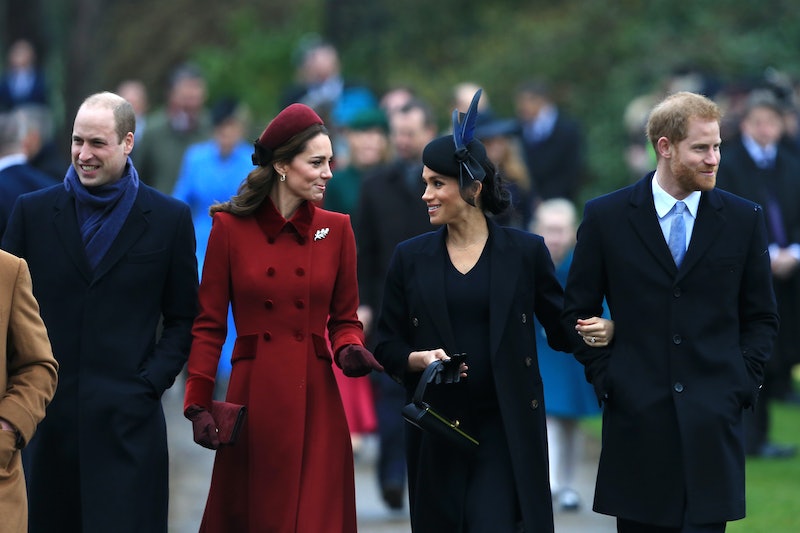 While it may have seemed that the Duke and Duchesses of Cambridge and Sussex had their fair share of royal duties in 2018, the lion's share was carried out by other family members. So who does the most royal engagements? Well, it's actually the older royals who do more public duties, according to statistics compiled by the Daily Mail.

With Prince William and Kate Middleton welcoming their third child into the world and Prince Harry and Meghan Markle, y'know, getting married and announcing that they were expecting, the younger royals were quite busy in their own way, however. Both Harry and William attended near enough 200 events each, but they were wholly surpassed by their father, aunt, and uncles. Prince Charles may have completed an astounding 507 engagements, but was beaten by his sister the Princess Royal who attended 518 throughout the year. How they have the time to go to all these events is beyond me — they must have one hell of a schedule.

To be fair to the young dukes though, it's understandable that the likes of Prince Charles and Princess Anne were attending so many events this year. Charles is next in line for the throne, and Anne is known to have "one of the busiest working schedules of any member of the royal family," having established "significant and ongoing relationships with a number of charities and organisations across the Commonwealth," as described by Kensington Palace.

Meghan Markle and Kate Middleton also did their fair share of commitments this year. Obviously Middleton had to cut down because of Prince Louis, but that didn't stop her from attending 87 events, while Markle attended a 96 events, which is pretty impressive for her first year as a member of the royal family.

Both Harry and William have increased their workload marginally from last year, stepping in as the Queen reduced her own commitments, and Prince Philip went into retirement. As the Sunday Express reported, "palace officials had billed 2017 as the year in which the younger royals [...] would step up to the plate to help take over the Queen and Philip's workload," which they definitely did this year.

When you compare that back to the 2016 figures, reported by the Express, it is quite interesting to see how the royal family dynamics are shifting in preparation for when Charles takes over his mother's duties. In 2016 the Queen reportedly did 211 commitments, which was pretty impressive given the Queen was just shy of her 90th birthday. "It's quite remarkable that the Queen and Duke have been doing so much," royal commentator Joe Little told the Daily Express. "I know they're on holiday in Scotland now but when you look at how much they did particularly in June day after day you wonder how they did it."

The Queen actually attended more events this year than she did three years ago, working 283 engagements compared to the 211 she completed in 2016. I totally aspire to have the Queen's work ethic when I turn 91, that's for sure.

More like this
Will Archie & Lilibet Attend The Queen's Funeral?
By Sam Ramsden
Twitter Is Saying The Same Thing About Roger Federer’s Retirement From Tennis
By El Hunt
The Queen’s Cause Of Death May Not Be Formally Announced
By Shahed Ezaydi and Catharina Cheung
Camilla Paid Tribute To The Queen In A Heartfelt Video Message
By El Hunt and Sam Ramsden
Get The Very Best Of Bustle/UK