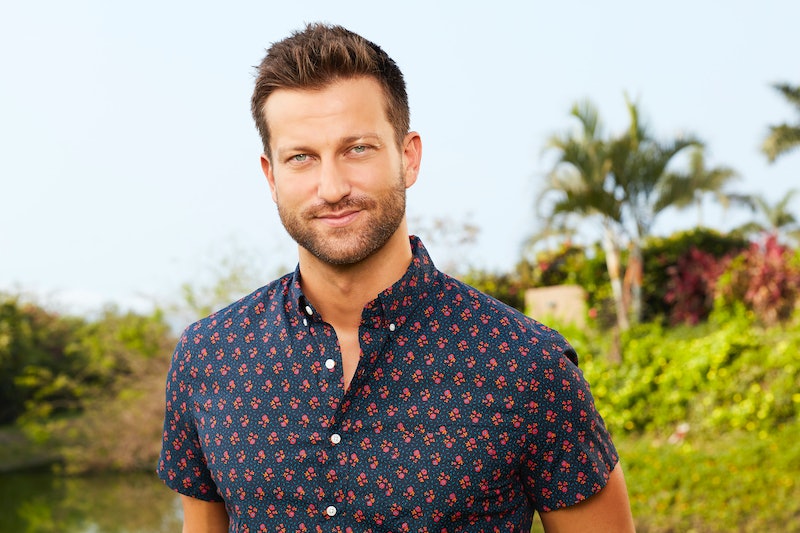 The Bachelor In Paradise roster this season will make for some interesting drama, as always. But there's one cast member who is notorious for dating within the Bachelor/ette pool, and some are skeptical of his presence on the show. Given how many people Chris B. has dated in Bachelor Nation, Paradise could either be the perfect place for him to find love, or just the beginning of another short-lived fling.

Chris B. was a staple of Bachelor Nation television back in the day, but back in 2015 he famously declared himself done with reality TV after appearing on five Bachelor/ette-related shows. That's a lot of onscreen dating — probably more than any person should subject themselves to — and he also behaved in a way that might not have been so great. So it made sense for him to take a step back. In a speech during an After Paradise special, Chris said it was "time to hang up the roses," and vowed he would never walk this path again.

But apparently, he just can't stay away. He won't be the only one returning after being on a franchise series more than once — people like Wills, Annaliese, Bibiana and Derek have all been around this block once or twice. But Chris has a longer list of former Bachelor Nation flames than anyone, and he also doesn't have the most stellar reputation. So before he returns to make more waves, let's take a look back at where he's been.

Chris B. first appeared on Emily's season of The Bachelorette back in Season 12, along with future Bachelor Arie Luyendyk, Jr., who would become Emily's runner-up. Chris came in fourth place, but he wouldn't be stopped for long.

During Season 3 of the now-defunct Bachelor Pad, on which Chris was runner-up, he and former Bachelor contestant Jamie Otis had a brief hookup that sent waves through the rest of the cast. Things... did not go well, and Chris went on to make some pretty gross comments about her.

Blakeley was part of somewhat of a love triangle between herself, Jamie and Chris on that same season of Bachelor Pad — but they ultimately didn't end up together at the end of the show.

Sarah Newlon from Season 11 of The Bachelor also appeared alongside Bukowski on Bachelor Pad, and the two had quite a bit of chemistry onscreen as well. It's really not surprising that Chris didn't end up with any of his Bachelor Pad co-stars, especially considering he referred to "trading in" the women like cars, according to Us Weekly.

Elise and Chris actually left Bachelor In Paradise together as a couple when Chris was forced to go home due to an injury. And though they didn't last, she told ABC News that she didn't regret it. "I came to paradise to leave with someone, to have a boyfriend, to start something," she said at the time. "I don’t want to spoil anything, but if leaving with Chris was the first step of that, I was willing to take it and I’m glad I did."

OK, OK, so this was definitely not a relationship, but it's a moment worth noting. Chris showed up to Andi's season of The Bachelorette in hopes of joining the cast, but was promptly turned away. Andi wasn't feeling it, but hey, as many faults as Chris has, at least he actually left when he was asked to. Luke P. could learn a thing or two.

You'd think that once Chris had unsuccessfully pursued this many onscreen relationships, and dramatically vowed to never do so again, that he'd be done for good. But that's obviously not the case. Who knows — maybe sixth time's the charm.