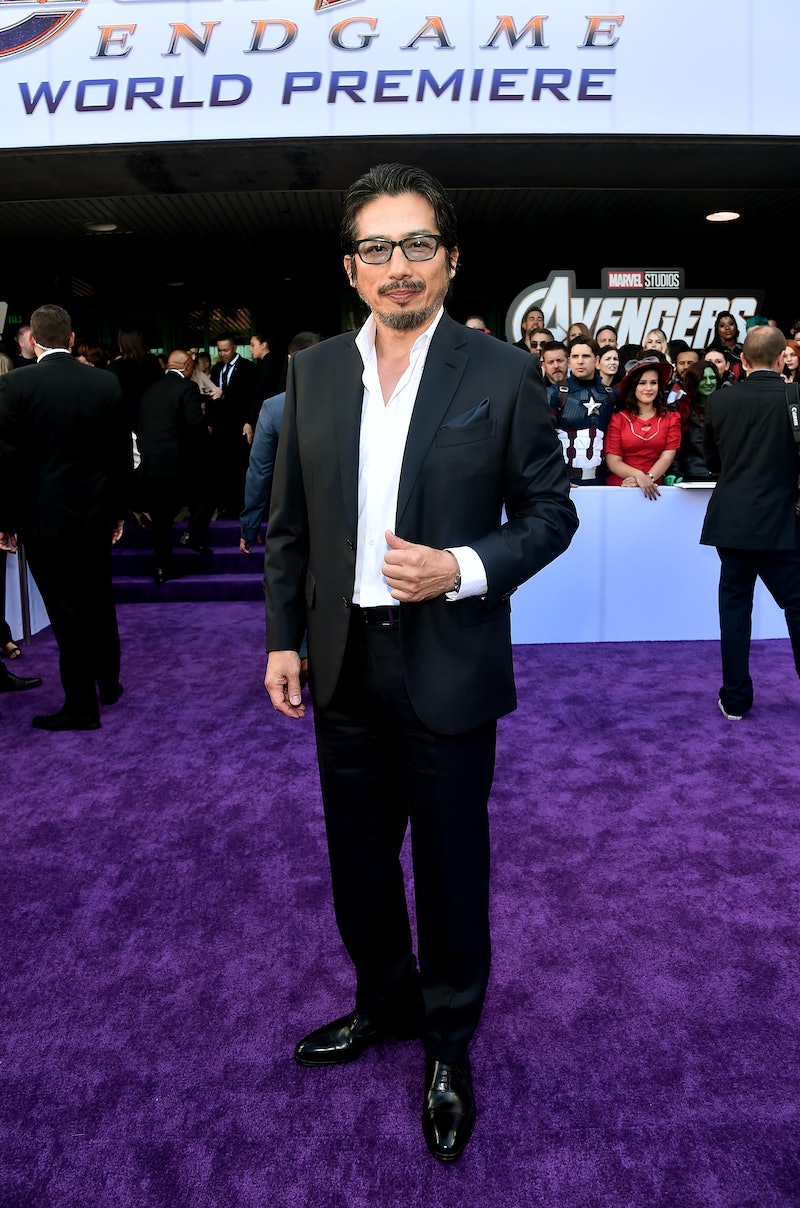 On Monday, April 22, the stars of the MCU walked a purple carpet at the premiere of Avengers: Endgame in Los Angeles. Despite red carpet reporters' mighty attempts to break them, the actors stayed silent about what exactly happens in Endgame, which, until it comes out in theaters on April 26, remains Hollywood's best kept secret. There were, however, a few revelations, including Westworld's Hiroyuki Sanada who announced what character he's playing in the upcoming MCU showdown. So who is Akihiko the Yakuza in Endgame? Well, for startes, he might explain where Hawkeye (Jeremy Renner) has been since Captain America: Civil War.

At the Endgame premiere, Sanada told Variety that his MCU character is, "A Yakuza boss in Tokyo, so somebody [comes] to Tokyo city and I fight against him." Just judging by the Endgame trailers that seem to show Hawkeye in Tokyo, it was already pretty obvious that Sanada's character would be going up against the archery expert in Endgame, but then Sanada went on to confirm these suspicions, saying that his opponent is a "New character in this movie called Ronin."

Sanada likely hoped throw off MCU fans by suggesting that Ronin is a new character, but it's actually a superhero identity from the comic books that Clint Barton, aka Hawkeye, has adopted during his time away from the Avengers. According to Polygon, Clint used the identity of Ronin in the Marvel comics from 2007 to 2010, but the alternate identity has been used by numerous Marvel characters in the comics, per ScreenRant.

As for Akihiko, though, the new character to the MCU has a minor role throughout Marvel's comics, which means that Endgame's directors, the Russo brothers, likely had a lot of fun with creating the new villain.

In the comic books, Akihiko is part of the Yakuza's science branch known as the Shogun Reapers, according to Marvel's Wiki. Clearly just based on that name you can infer that this group doesn't just sit in the labs all day, but rather they built a cannon on the moon that could control the earth's tectonic plates in hopes of holding the earth at ransom for money and power. Nick Fury foiled that plan and, per Marvel comics' wiki, he hacked into Akihiko's armor to defeat the Shogun Reapers.

Obviously that battle scene won't take place in Endgame considering that the post-credits scene of Infinity War showed Nick Fury (Samuel L. Jackson) turning into dust right after paging Captain Marvel (Brie Larson). That and the fact that the new MCU movie will surely focus on the Avengers' attempts to save the half of its team that disappeared with Thanos' Infinity Gauntlet snap, even if its actual plot is largely shrouded in mystery. That moon cannon stuff will have to hold off for a later movie, perhaps in Phase 4 of the MCU.

While talking to Variety, Sanada described his battle against Ronin, saying, "We got a big fight scene in the downpour, we shot all night in the rain," so you can definitely anticipate an exciting showdown with two technically new MCU characters.

It might seem like Sanada revealed a ton of information on his character, but this new knowledge only leads to more questions. Why is Ronin fighting the Yakuza in Japan? What possible connection could Akihiko have to Thanos and the Infinity Stones? With the addition of this new character, Endgame's possible surprises are even more intriguing than ever before.

More like this
Meet Clea, Charlize Theron’s New Marvel Character
By Morgan Leigh Davies
What Does Doctor Strange’s Third Eye Mean?
By Arya Roshanian
Wait, Did Wanda Die In 'Doctor Strange And The Multiverse Of Madness'?
By Arya Roshanian
Elizabeth Olsen Is Better Off Without Us
By Chloe Foussianes
Get Even More From Bustle — Sign Up For The Newsletter