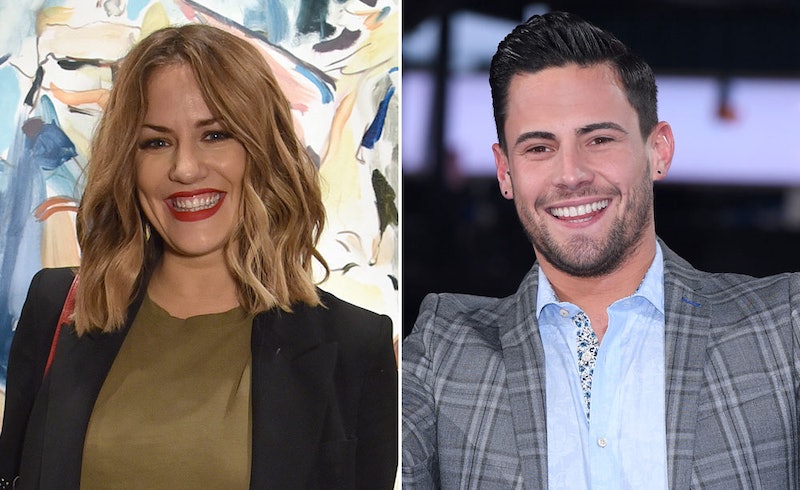 Love Island's smitten Caroline Flack has been giving fans a glimpse behind closed doors since confirming her engagement to Andrew Brady last month, despite usually being pretty private when it comes to her personal life. But even with the regular updates on social media, including pics of the ring and their getaway to Santorini as a newly engaged couple, an air of mystery still surrounds the man himself. So, who is Andrew Brady and how did he meet his bride-to-be?

Let's go back to the beginning. The pair originally met on a night out at a trendy bar in East London earlier this year, according to The Sun. News of the couple becoming, well, a couple, was then reported by the tabloid in March, with the Evening Standard reporting that Flack changed her Facebook profile picture to a cute snow-flecked selfie of the pair in March.

Just weeks later, she announced their engagement on Instagram via a beaming selfie of her, Brady, and an unmissable diamond-studded engagement ring. Underneath the pic, she posted the frankly adorable caption, "He’s put it on my finger and it won’t come off ... so I’ve said yes #chooselove ❤️." Cute, right? Now, as filming is about to kick off for Love Island 2018, it has been reported in the Metro that Brady will be joining his soon-to-be wife in the heat of Majorca while she hosts the show that aims to spark some romance of its own. But how did this love story start?

Well, getting the lowdown on Flack's Mr Right has required a bit of detective work, but it turns out, there is more to this tale than meets the eye. Before his reality TV debut in 2017 on The Apprentice, Brady used to have a very different day job. Originally from Cheshire, he previously worked in the aerospace industry, with his LinkedIn revealing his experience as an engineering project manager. He lists his employers as big names in the aerospace industry, such as Airbus and GKN Aerospace, while his last gig was at the Ministry of Defence, where he worked from September 2015 to August 2017. Left of field, eh?

He then left his day job after securing himself a place on The Apprentice. During his time on the show, there was an air of scandal around Brady, with The Sun reporting that he hooked up with his fellow candidate, engaged Anisa Topan, while the show was being filmed. However, both stars denied claims that anything happened between them, and Topan went on to marry her fiancé in October.

In his video interview for The Apprentice, Brady cited his coal miner grandfather as his inspiration, saying that "he was the hardest worker you could ever know." But while his charm wasn't enough to win over Lord Sugar (he was eliminated in the show's eighth week), things still seem to be going pretty well for the aspiring entrepreneur.

In fact, Brady's reality TV career didn't waver at all after being booted from The Apprentice in late November 2017. He went on to enter the Celebrity Big Brother house in January 2018, with The Sun reporting he received a fee of £10,000 for his appearance. It's fair to say Channel 5 bosses saw a return on their investment, as his antics in the house kept viewers fully entertained, especially with his will they/won't they relationship with Shane Jenek, aka Courtney Act from RuPaul's Drag Race. Unfortunately, Brady didn't make it to the end of the series, but his friendship with Jenek is still going strong.

It was shortly after his CBB eviction that rumours of a budding romance between Brady and Flack started to make headlines, with photos of the pair appearing in The Sun after a reported first date to the cinema to see The Shape of Water (good first date film? Jury's out). Paparazzi shots surfaced of the couple walking down the street, Brady with his arm around Flack.

Since news of their relationship broke, Flack has had to field sexist comments about their age gap of almost 11 years (Flack is 38, while Brady will turn 28 in September). In a recent interview with the Mail on Sunday, she said: "I knew things felt different in the lead-up; from the very first date with Andrew I felt as though I’d known him for years. I’ve never had that feeling before." A very positive sign for the happy couple. And speaking of signs, Brady's a Virgo to Flack's Scorpio, which could actually work very well, as Scorpio and Virgo tend to have a high compatibility. Interesting.

Only a few weeks after the couple became official, The Sun reported the pair had split amid rumours of Brady cheating, with friends of Caroline claiming to the Metro that she felt like she couldn't trust her new boyfriend. The separation didn't last too long though, with the couple appearing to work things out after a few weeks. Ready to show the world that her relationship is back on track, Flack even got Brady's initials tattooed on her wrist, which is quite the commitment.

Both Brady and Flack's social media have been aglow with cute photos of the couple since then. They even went on an "engagement-moon" (this is a thing now, apparently) to the gorgeous Greek island of Santorini.

No date has been announced as of yet for the wedding, but considering it took a mere three months for Brady to propose to Flack, it probably won't be long before we are reading about the plans for the big day.

Verdict? Buy a hat, he seems like a fast-mover!