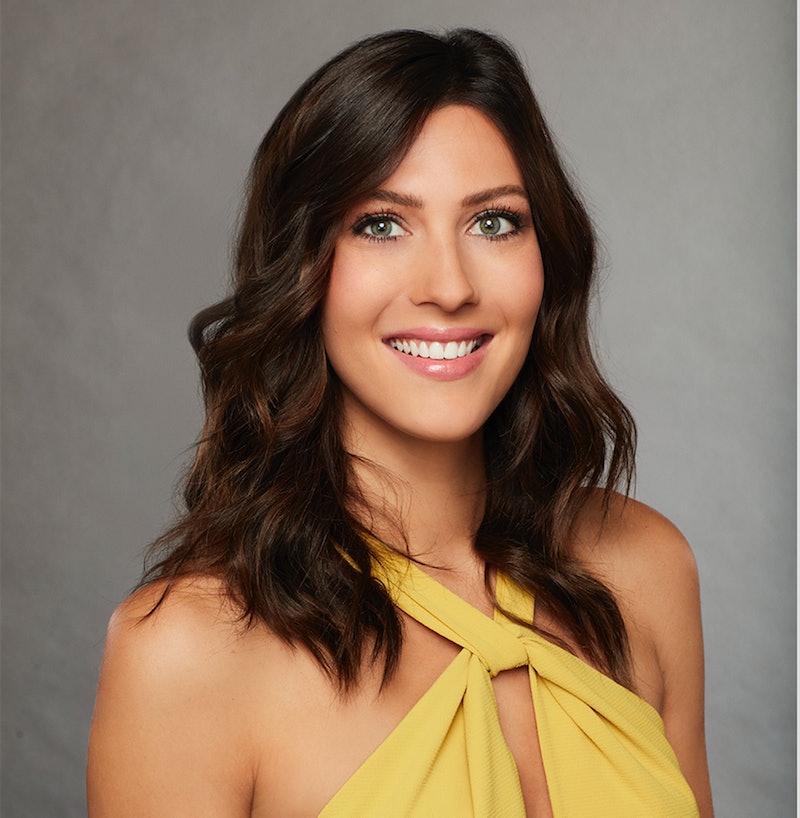 A new Bachelor season may mean a new leading man, but it also means 29 new women to get to know. One of them is Bachelor contestant Becca K. The 27-year-old publicist is among the romance hopefuls vying for the final rose of Arie Luyendyk Jr., who makes his return to the franchise five years after placing as Emily Maynard's runner-up.

So far, there have been a few women being granted early screen time: Bekah, in part because of her young age; Chelsea, who bears an uncanny resemblance to Season 20's Olivia Caridi; and Tia, who's best friends with Season 21 standout Raven Gates. Becca K. isn't among those contestants, which could mean one of two things: She's cut loose within the first few episodes and promptly forgotten, or she's a top contender Bachelor producers don't want to amp up just yet in fear of spoiling things too soon. Knowing The Bachelor, she likely falls into the latter camp. Raven was barely featured in the promo for Nick's season, but ended up being one of the last women standing, while Corinne was given heavy attention but ultimately didn't go the distance. Often, it's the ones that initially fly under the radar that you really have to watch.

With that said, it's worth giving Becca K. a second look. According to her ABC bio, she's from Prior Lake, Minnesota, where, per her LinkedIn, she works as a senior account executive for a PR and marketing agency called Skyaa. She has an eclectic taste in movies — she includes both '90s comedy Sister Act 2 and 2000 action epic Gladiator among her favorites — has three tattoos, and describes herself as "loyal, honest, [and] charismatic." Stable career, broad interests, and well-rounded personality? That's already a strong start, but there are a few more details to be gleaned.

A quick scan through her Instagram shows she has an affinity for furry companions: cats, dogs, and even bunnies are all over her page.

When asked by ABC what the five things she couldn't live without are, Becca responded, "Chapstick, facial lotion, bobby pins, popcorn, and stamps." It's not the most exciting range of items, but she seems to have her priorities in order. As a race car driver, Arie is more of an adrenaline-seeker, but as long as she can keep up with his wilder tendencies, that might make for a good yin-yang balance.

But Has An Adventurous Side

She Lost Her Dad

According to Reality Steve, Becca's dad died roughly eight years ago, and she posted a touching tribute to him last Father's Day. "Not a day goes by that I don't think about the angel that is Steven Karl (with a K) Kufrin," she captioned an Instagram photo. "He gets the Father-of-a-Lifetime award for putting up with me between the ages of 3-17." It's a safe bet that if Becca makes it far, her dad will be the subject of some emotional one-on-ones.

In January, Becca posted a photo of herself protesting at the Women's March. You've gotta love a woman who sticks up for what she believes in.

She's Not Wasting Any Time

For her entrance, Becca asked Arie to get down on one knee, hold out a ring, and ask if she was ready to "do the damn thing," which quite deliberately looked like a proposal. It's clear she knows what she wants.

She Was Made For 'The Bachelor'

Also in her ABC bio, Becca says the four things on her bucket list are hot-air ballooning, grape stomping, falling in love, and owning a house and dog with her partner. After The Bachelor, she can check off at least a few of those things.

Time will tell if that's enough to woo Arie in the end, but Becca definitely has promise. See how things play out when The Bachelor returns Jan. 1 at 8 p.m. ET.