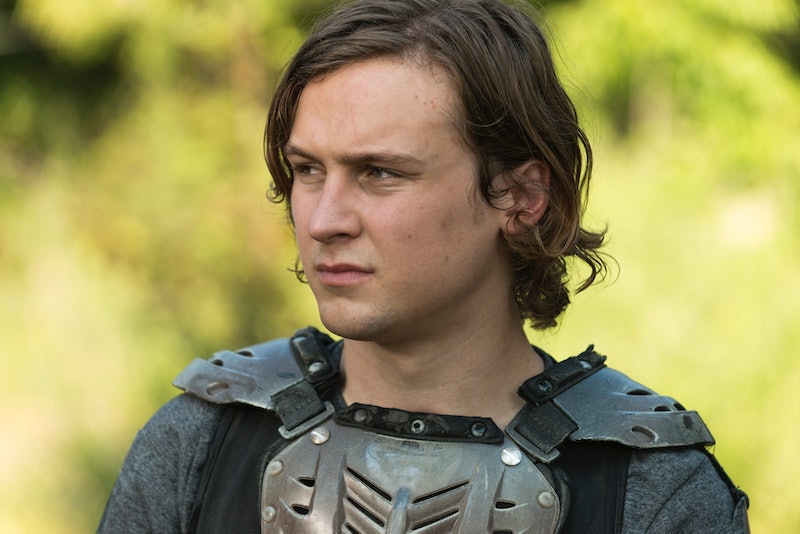 It’s been a long two months waiting for the return of Rick Grimes and Negan, but it’s finally here. The Walking Dead Season 7 returns on Sunday, Feb. 12 and it's jumping right back in to where it left off, which is pretty much just people trying to fight Negan and him killing them in return. Since we lost so many people in the first half of the season, it makes sense that new characters will be introduced and minor figures will step into the forefront. The latter is the case for Benjamin from the Kingdom, who we saw when Carol first entered the community but may take on a larger role as the season continues.

You may have forgotten because your attention was focused on Ezekiel and his enormous pet tiger, but Benjamin was there when Morgan and Carol entered the Kingdom in "The Well." Morgan goes out on a run with their group and Ben is told to kill a walker like “he practiced,” but was really struggling and had to be saved twice. Ezekiel asks Morgan to teach Ben how to fight like he does (with a stick) because the boy isn’t doing too well with other weapons. Throughout the episode, Morgan gets to know Ben and it looks like he’s going to mentor him. It also seems that Ben is special to Ezekiel, but we don’t know too much about why yet, so his story should be fleshed out in Season 7B.

If you were hoping to get some more information about Benjamin from The Walking Dead comics, I have good and bad news. The good news is, he does appear in the comic books. The bad news is, his role there is very different and a lot less exciting.

In the comics, Ben is one of the guards in charge of keeping the route to Hilltop Colony clear of walkers. While on duty one day, he fails to do his job properly and Rick screams at him for almost getting him killed. He tells Ben that he’s going to report him and basically tells him not to mess things up again. Later, they are informed that Ben has been placed on probation for the incident and that’s pretty much his entire plotline, though he is still alive and could be mentioned again.

One important thing to remember is that at this point, Morgan’s entire plotline is deviating from the source material, as he's outlived the comic version of the character. Training Ben, a character also lacking major comic book plots, could be the perfect story for him, letting him pass along his practices and values. It’s important to have some characters with those morals in a battle as intense as the one Rick is about to wage on the Saviors.

Benjamin's story could really go anywhere, so keep an eye out for this young Kingdom resident as The Walking Dead Season 7 heads into this war.