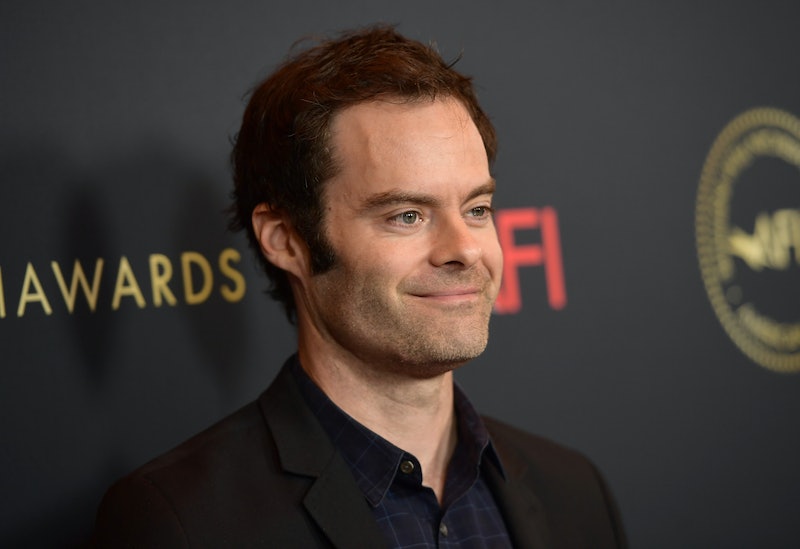 He's smart, he's funny, and his celebrity impressions will keep you endlessly entertained. He won his very first Emmy in 2018, and the second season of his dark comedy, Barry, is up for 17 more this year. In short: He's a catch. So, who is Bill Hader dating in 2019, you wonder? The It Chapter Two star actually went through a divorce last year, and it seems like he's been trying to focus on spending more time with kids.

Hader married filmmaker Maggie Carey back in 2006, and the couple had three daughters together — Hannah, 9; Harper, 6; and Hayley, 4 — over the course of their 10-plus-year marriage. However, they decided to separate in July 2017, and in December of that same year, Hader filed for divorce.

Their split was officially finalized the following summer, but it actually seems like the whole thing was pretty amicable. "I’m friends with my ex-wife," Hader told Variety during an interview in January 2019.

While he and Carey share joint physical and legal custody of their children, lately, Hader's career has kept from seeing them as much as he'd like. "I think I saw my kids a total of five days all summer," he admitted to Variety, "It was terrible."

He told the outlet at the time that he was determined to take this summer off, in order to make them his first priority. "It’s this weird thing where when you’re in this industry, you don’t have time to be with them, and it’s really, really difficult," he explained. "I’m getting emotional right now talking about it," the actor admitted.

The whole thing made Hader so emotional, in fact, that later on in the conversation, he actually broke down in tears. "Congrats, it’s the first interview I’ve ever cried in," he told the outlet with a laugh.

All of that being said, it doesn't really seem like Hader is super focused on finding love with someone new right now. However, when he does decide to dip his toe into the dating pool again, you probably won't catch him doing so while getting wild in a club.

During an interview with Elle back in July 2015, Hader described a typical date night for him and his then-wife. "A crazy night for us is drinking margaritas and going to the Strand bookstore and being kind of drunk," he told the outlet.

He then went on to reveal that, "On our first date [in L.A.], she took me to the school where Grease was shot. We sat on the steps and drank tallboys at, like, two in the morning." After that, Hader said, he remembered thinking, "I probably gotta marry this girl."

So, women of the world, take note. Hader sounds like he likes to keep things pretty low-key, but he also admitted to Elle to being "a very neurotic person." Having patience is probably key for any woman hoping to win Hader's heart, especially considering the fact that his career shows no signs of slowing.

Since Hader seems to want to put his kids first for now, fans of the star will just have to admire him from afar. Luckily, It Chapter Two is officially in theaters, so — if you're not too terrified by murderous clowns — you'll have three whole hours to admire Hader's handsome face.