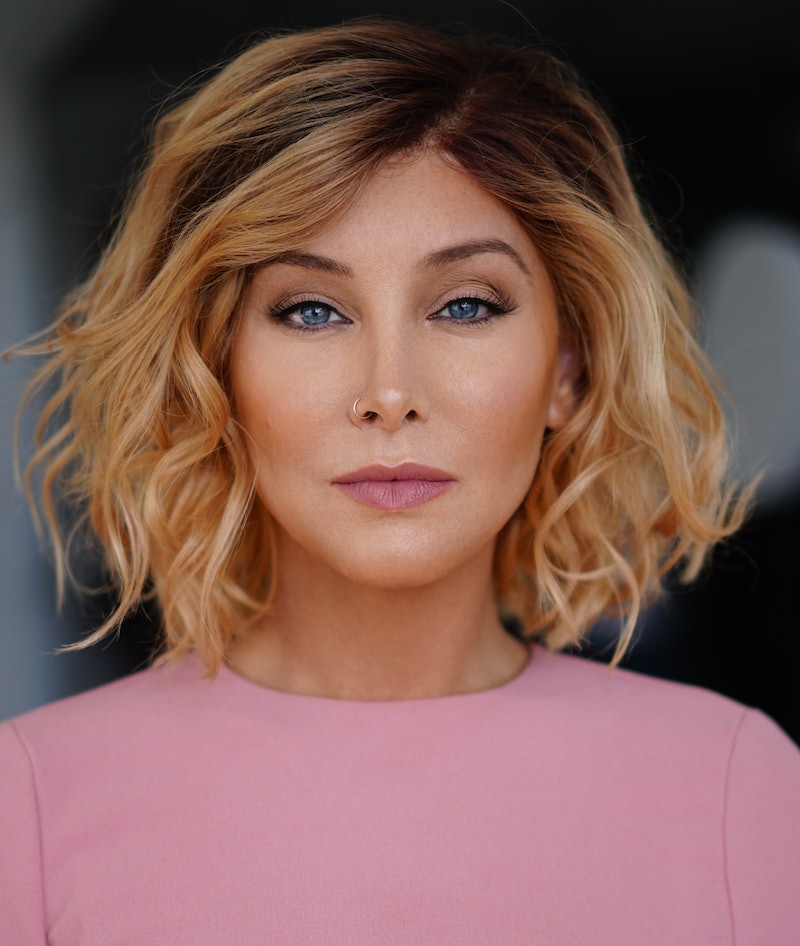 Given the incestuous nature of the cast of Vanderpump Rules, it's nice to add a fresh new face sometimes to mix things up. Right now, that person is Billie Lee, a trans rights advocate and SUR's newest hostess. We were briefly introduced to her in Vanderpump's previous episode, but who is Billie Lee on Vanderpump Rules? In a phone interview with Bustle, Lee discussed everything from the hot guys at SUR (obviously) to how she deals with close-minded people.

While it could be daunting to take on the responsibility of being the first openly transgender cast member on Vanderpump Rules, Lee is shaking it off. As an activist, she's glad to educate. "I'm grateful for the opportunity… I really don't mind answering questions or telling my truth," she says. Still, she's careful to note that every trans person's experience is different and she doesn't want to speak for all. "[Being on Vanderpump is] a proud moment for me to tell my truth, [but] also, at the same time, being trans is a small part of me, and not a golden standard or anything," she adds. "I think sometimes, I definitely don't want the pressure where everyone needs to come to me for the ultimate trans experience or for the ultimate answers, because I have my own personal experience, too."

It's been a long road for Lee to get where she is today, but she did so because she had faith in herself and support from people around her. So how did she end up at SUR? It happened with a little help from the boss herself, Lisa Vanderpump. "Honestly, as an activist, you don't get paid," Lee says. "You don't make money! I needed a job, and I had a friend who knew Lisa, and they were like, 'Oh, she loves the LGBT community, you should get a job at one of her restaurants,'" Lee says. "I applied, and I met with [Lisa], and I got the job. And she's like my fairy godmother. I feel like she should have a wand because she just makes things happen and she inspires me." If only all of us could call Lisa Vanderpump our fairy godmother, right?

The rest of the SUR cast has been welcoming to Lee, too. "My coworkers are amazing. Ariana is one of my best friends. She's the sister I've always wanted. Lala, everyone… they all opened their hearts and their arms to me and just embraced me. The boys are all amazing. Tom [Sandoval] is one of my best friends," Lee says. And while Jax may be persona non grata for many on Vanderpump Rules right now (he cheated on Brittany and almost blew up his relationship), that's actually what drew Lee to him.

"I'm always the person that, no matter what happens, if someone is in the doghouse, I want to go and feed that dog and inspire them and just pet them," Lee says. "[Jax] has an amazing energy about him that everyone's attracted to, which gets him into this trouble. We talk about yoga and meditation — I'm big into that, and I wanted to inspire him… I really like Jax. I get that he has these urges and these troubles. A lot of us have that, and I felt for him in that way."

As for what the rest of the season will bring, Lee teases, "I flirt! I love connecting with people. It's not necessarily that I want to sleep with them… so you'll see me dating and experiencing crushes and I, it was a little nerve-wracking to date on camera. As a trans woman, you go through a lot of rejection in life, especially in dating, so I was nervous about being rejected and I just was like, 'I'm just going to live my life.'" It's nice that fans will get to see Lee put herself out there. "The boys there are so hot, so why would you not want to date them?" she adds.

Of course, Lee has endured a lot to get up to this point. From deciding to transition to transitioning to living her life as a woman, it hasn't necessarily been easy. For instance, she couldn't get a job for an entire year while she transitioned, and it led her to some dark days. "You're so vulnerable when you transition — you start hormones. You're starting puberty as an adult, and you're literally... you're an open wound. You can easily be knocked down or hurt," Lee says. "I couldn't get a job for a whole year because I was awkward looking. In Los Angeles, you have to have headshots [to work in a restaurant], and I was in between. The opportunities weren't there, and I went to a dark place where I didn't have any income."

Her parents tried to help her out — her father even sold drugs to help her make ends meet and fund her transition — and Lee found herself selling her own body to come up with the money to eat. "I had to do… not so pretty things to make money. Now, I'm okay with it," she says. "Back in the day I wasn't proud of it. It was survival mode. As a trans person, sometimes we have to do what we have to do." Once Lee's transition was complete, everything changed. "Once I had all my surgeries, the red carpet rolled out for me. It was like, 'Here, you want a job?' All the guys wanted to date me. I was the cool kid all of a sudden. That's society for you," she says.

The current administration is openly hostile to trans people, declaring that they cannot serve in the military and trying to erase their rights from every aspect. But even when it seems like everything is a fight, Lee remains hopeful. "It's really hard because the government is saying no… but by doing that, it's really pushing us to fight harder. We fight with love," she says. "Being trans and going through… think about what I went through and coming out on top of that? Think about that with every single trans person in society. We are very powerful, and we act in love. They can hate, but love will conquer hate. Trump can hate all he wants, but he's doing something that's lighting a flame and empowering us to come back."

That being said, sometimes it's hard for Lee to keep her head up and keep pushing through. "Thank god for yoga and meditation, because I'd probably be a crazy bitch screaming at everyone. You know, there are times I get frustrated… There are some things that hit home," she says. "Trans women are murdered left and right… trans women of color? Forget about it. It's so hard. They literally walk the streets in fear because they are getting murdered left and right. That's when I really cry. That's when it hurts."

Luckily, Lee's upbeat demeanor and activist heart keep her moving forward, both in her own life and in getting trans people the assured rights they deserve. "I can't get angry over ignorance," she says. "Even if your mind is a little open, that's the person I'm speaking to. If the person is closed off… I'm moving on. I don't have time to push someone's mind open." Twitter trolls and tweeting presidents aside, Lee is living her life on her terms, and she's happy to be a part of Vanderpump Rules and the trans advocacy movement. "If I get angry at [trolls], they're winning," she says. "And if I continue to live in love and know my truth, I'm winning."